The Mariners beat the Rangers Sunday 4-3 behind 7 innings of Erasmo Ramirez and a late Kyle Seager RBI double.

Share All sharing options for: 57-66: Mariners sneak past the Rangers in the 9th 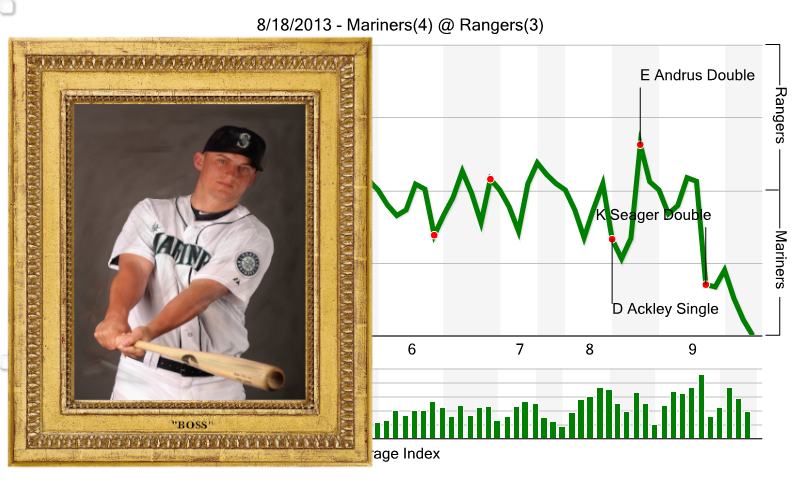 Baseball is strange. Today the Mariners played a game of baseball that lasted three hours. 50+ grown men in matching uniforms took part in this event with careers and futures on the line. Lots of things happened. Some of the things were wonderful, and made the specified participants very happy. For one- Dustin Ackley had two hits, one coming crucially late in the game to score a run. Of course, some other things happened, like Raul Ibanez eating fifty seven sunflower seeds in the dugout, and the conversation Charlie Furbush and Yoervis Medina had in the bullpen during the third inning. These things were not as important, but they definitely happened nonetheless.

But one very specific thing happened that was more important than all the other things combined in the entire game. It was this double from Kyle Seager in the ninth inning, scoring Endy Chavez to put the Mariners on top of the Rangers: 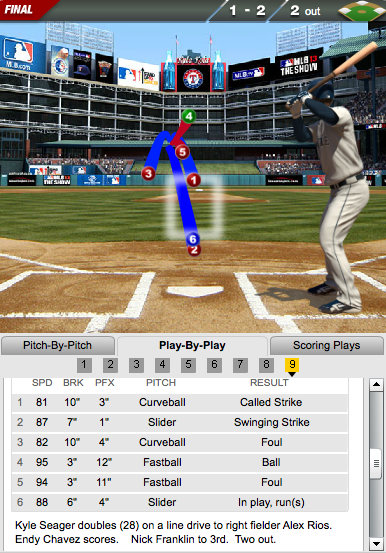 Yay double! Yay production! Yay Kyle Seager! Sorry everyone else. Seriously, it's kind of funny when you think about it. Erasmo Ramirez pitched 7 innings and held the Rangers to only one hit until the 5th inning. He's 23 years old, and has only played 7 games this entire year. Also, the Rangers are good. Really good. Without Erasmo pitching this consistently throughout seven innings, the Mariners lose. If this game was started by another pitcher (who shall remain nameless), the Mariners probably lose. Erasmo saved this game.

In the top of the 5th inning, Michael Saunders looked at a Yu Darvish slider. Then he hit the next one into right field, and took second after Dustin Ackley hit a single. As he stood on second base out of Darvish's peripherals, he stole third and beat the throw. Endy Chavez hit a grounder a few seconds later, and Saunders scored, while Ackley somehow beat the throw to second to stop the double play (maybe). That was a crucial run. See, it's math: if the Mariners didn't score this one run by Michael Saunders in the 5th inning, they wouldn't be up one at the game's conclusion. It's how baseball works. But wait, there's more! Saunders hit a double in the 6th as well, scoring Nick Franklin from third. Wow! These are things that happened and they were important. Saunders saved this game.

And how about Dustin Ackley's eighth inning RBI single, scoring Kyle Seager from second? Just as important as any of the other runs. Ackley saved this game.

And really, the Mariners hitters had a decent day against the strikeout machine that is Yu Darvish. Even though he notched 7 K's against M's bats, he still gave up 7 hits and tied his season-high with 4 walks. One of those walks scored a run: Franklin in the top of the 6th. So in a way, Nick Franklin saved this game too.

Yoervis Medina replaced Erasmo in the eighth, and promptly ran into trouble with an Elvis Andrus RBI double scoring Craig Gentry from first. He struck out Ian Kinsler to get out of the inning and after the Mariners took the lead, he traded spots with Danny Farquhar, who actually literally saved the game.

I mean, Erasmo had his fair share of trouble too, but that's kind of the whole point I'm making here. Even though he gave up a run in the 5th and a run in the 6th, some other pitcher blew it at a different point in the game, so that guy statistically impacts the game more than Erasmo. Thanks, Yoervis. Oh, and then there are little unquantifiable things: In the 6th inning, Kyle Seager played cup-and-ball with a Craig Gentry grounder and missed the toss, putting him on base. Up came Elvis Andrus, and Gentry took off for second. Having apparently just eaten an entire bag of sugar washed down with twelve five-hour energy capsules, Humberto Quintero tried to throw him out by tossing the ball to Michael Saunders in centerfield. Gentry reached third, and scored moments later on an Adrian Beltre single. Even worse, as Beltre stepped off the bag to admire his work, Chavez threw a laser back to Smoak, who quickly tagged Beltre out as he dove back to first. For some reason, first base umpire Paul Nauert was nowhere to be found, and second base umpire Doug Eddings called Beltre safe partly because he was fourteen miles away at second and didn't see what happened, but mostly because he is a member of Angel Hernadez's umpiring crew and is therefore made evil incarnate by association. And while it wouldn't matter in the end, it sure was obnoxious.

So these are all things that happened in the game. All of them had impact, as we can see in the graph above. All of them mattered, and the Mariners wouldn't have won the game without small contributions from everyone. But because Mariners' pitching gave up three runs, and because Mariners' hitters scored three runs, they also sort of didn't matter. The game was reset in the bottom of the eighth inning.

In a way, there was only one inning of baseball played today. In this game, Endy Chavez hit a single, moved to second on a Humberto Quintero bunt, and scored a run on Kyle Seager's two-out RBI double. Then Danny Farquhar pitched a perfect game. And that's all that happened. Shades of 1995, you guys. Shades of 1995.

Don't forget to swing by Rick's Prospect chat to read about all things D.J. Peterson and Ji-Man Choi, happening as I type this. Rick knows more about the Mariners' minor league system than just about anyone who isn't actually working for the team, and if you find yourself questioning why you should care about the Mariners in a lost 57-66 2013 season, the answer can probably be found in that thread's discussion.

1. What outfield combo are you hoping the M's play the most through the rest of the year?