Felix had a rough night, but the bullpen imploded in tonight's 15-3 loss to the Texas Rangers. Ugh.

Share All sharing options for: 56-66: The Seattle Mariners (don't) beat the Texas Rangers 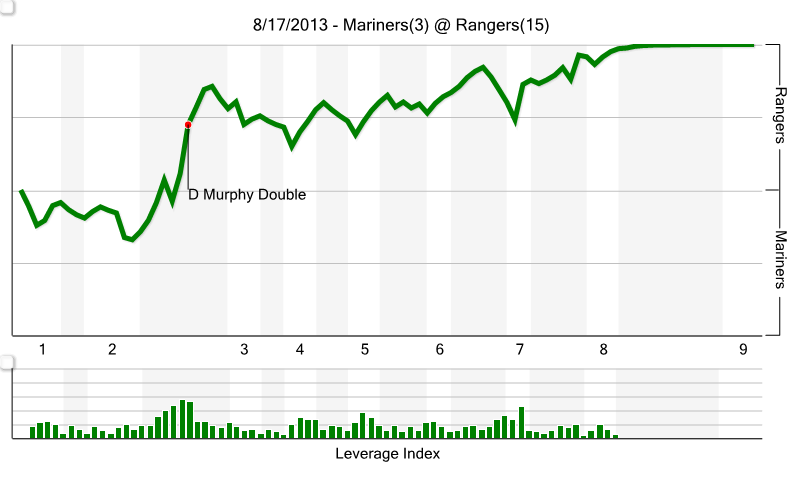 Well, it wasn't quite the Felix day we imagined, now, was it?

Tonight was off to such a great start after Brad Miller sent the second pitch of the game into right field for a standup double. And only moments later, Kyle Seager sent him home on his second pitch. Before you knew it, it was 1-0 Mariners. Felix came up and had a clean first, but almost took Ian Kinsler out on a curveball that hung in the air right for his head. Kinsler ducked, the ball bounced off his bat, and seconds later he grounded out to Brendan Ryan. As he hopped over the first base line into the Mariner's dugout, he tossed Kinsler the very same look he usually gives his friend Adrian Beltre, and they shared a laugh over the play. It would be the last time Felix smiled all night.

Tonight was dumb. Just that, dumb. Even the great things that happened were stolen from the ledgerbook as if they had not occurred at all. In the second, Dustin Ackley singled into center, stole second, and scored handily after a Brendan Ryan RBI single. Go back in time to May and read that sentence. But it wouldn't really matter, now, would it? Kyle Seager hit a solo home run in the top of the third, his second game in a row. That also wouldn't really matter. I mean, don't get me wrong, I'll take the small stuff any day. But did you see this box score?

Here's what happened: Felix started having trouble right away in the second inning. After trading his usual barbs with his Costello, Adrian Beltre, Felix Abbott'ed a hit to the guy, and quickly put Alex Rios and Mitch Moreland on with a single and a walk, respectively. He was pissed, but the damage was minimal, and enough to give him juice in the tank to strike out Geovany Soto on three pitches.

And then the rest of the inning happened. And unfortunately, Felix's strength can so often be his very worst weakness. Competitiveness can create incredible scenes with two on and no outs, as your guy waves the pitching coach back into the dugout to strike out the side and get out of a jam. But sometimes that same competitiveness keeps thinking I got this and the hits just bleed, and bleed, and bleed. I'm not going to pretend to know what went through Felix's mind, or what Blanco was calling, or what Carl Willis said when he came out to calm Felix down after giving up back-to-back RBI hits to Jurickson Profar and David Murphy. But I know that after Willis returned to the dugout, Felix watched Leonys Martin score Profar on a beautiful squeeze bunt (seriously, fuck bunts but that was incredible), and wouldn't get out of the inning until giving up another bloop single to Elvis Andrus. It was 5-2 and even with Seager's dinger in the 3rd, the Mariners would have lost. Its just...did we really need to lose 15-3, guys?

So the game story really ended there, but there are a few interesting things to look at. Felix walked three batters in the 5th, which is crazy. Felix's season high in walks is 3. Tonight he had 5, and it was by no means the worst thing that happened all night.

First, the good. Obviously, putting Brad Miller on second in two pitches is great, and it seems the Mariners may have their leadoff hitter for next year in the bag already. Seager had a great night as well, going 2-4 with his 3rd inning HR. But the biggest story of tonight is holy crap where did Dustin Ackley come from? The guy has had consistently good games throughout the month of August, and put up two hits against Rangers' lefty Martin Perez tonight, as well as a ninth-inning single off reliever Ross Wolf. Ack is batting .217 off lefties, so this is a good sign. Now power? That's another story.

This is almost something worth a post on it's own, but Ackley's transformation since coming back up as a centerfielder has been an almost completely different ballplayer. He was never a power hitter by any means. But look at this:

Obviously he's only played about half the games he did last year. But his average and OBP are very similar in both years, while his power is obviously down. Granted, this is taking his entire year into account, including his rough first-half before being sent down to Tacoma. But I can't help shake the feeling that Ackley might be turning into not just a different defensive position, but a different kind of hitter as well. But since he's been back from Tacoma, he's been sporting a solid .265/.308/.373 so who knows what the hell is going on here. Stop teasing us. Or just keep doing this. Just make up your damn mind.

Felix went through five after finally calming down a bit. Ian Kinsler was thrown out at second after yet again oversliding the bag, and this time Angel Hernandez wasn't even the umpire to call him out. But then Lucas Luetge came in to replace Felix in the sixth and you can guess the rest. The Mariners actually escaped scoreless here, but it wasn't pretty. Carter Capps had to come in to clean up Luetge's single, HBP, and Profar...who reached on a Brendan Ryan error...that...I...ugh.

The Rangers tacked two on in the 7th after a Craig Gentry RBI double with Oliver Perez pitching, and then Oliver Perez came up in the eighth inning. Somewhere a major league GM was watching the game in his office next to his scout who was trying to convince him to sign Perez in July. This scout is now either toothless, on the street with a half-empty bottle of Chardonnay in a paper bag, or selling their body on the street because noone will ever take their word about a baseball player anymore. Oliver Perez was a wreck, and Charlie Furbush couldn't clean up the bed he left. The Rangers scored 8 in the eighth. 8. 8. EIGHT. I'm done typing. This was a nightmare. I hate the Texas Rangers.

2. Worst job you've ever had

3. Favorite baseball player on your least favorite team (Except Beltre):

4. How are you taking all this Chris Hansen business?