Hisashi Iwakuma duels Derek Holland for seven innings, but Kyle Seager and Justin Smoak go long to put the Mariners up 3-1 against the Texas Rangers.

Share All sharing options for: 56-65: Mariners to date lossless after August 16th

Well, today there were two baseball games played at Rangers' Ballpark in Arlington. The first lasted seven innings, and saw two of the American League's rising stars throw a pair of stunning lines for the day. Both Rangers' starter Derek Holland and our Hisashi Iwakuma went exactly 7 innings before being pulled for relief, and just stop and think for a moment that you got to see two pitchers do this:

If you had to miss it, apologies. Tonight would have been fun to watch regardless of giving two craps about either the Mariners or the Rangers. How great is that? When was the last time you could have said the same thing about a game the Mariners have played this year?

So it was all blanks, save for the bottom of the fourth. Iwakuma got in a little trouble after giving up a leadoff walk to Ian Kinsler, and sending him to third on an Adrian Beltre single. A.J. Pierzynski sent Kinsler home on an RBI single, then tried to stretch it to two. Pierzynski slid into the bag at the exact moment Raul threw to Nick Franklin, but overslid the base by seriously like half an inch. Franklin wisely held his mitt on Pierzynski's ribcage, and wouldn't you know, Angel Hernandez of all umpires was the one to call him out. Ron Washington came speeding out of the dugout to contest and everyone made a bunch of jokes about instant replay hahaha oh man, did you hear about the instant replay rules? But Kinsler did leave the base, and the tag was consistently applied. This threw me off for a second, so I looked at the official rules, and sure enough:

7.08: Any runner is out when-- (c) He is tagged, when the ball is alive, while off his base. EXCEPTION: A batter-runner cannot be tagged out after overrunning or oversliding first base if he returns immediately to the base.

Sorry, Ron. Not this time. Feels good to be on the right side of the law for once. But regardless, the run remained.

The Mariners were also being no hit by Holland, until Justin Smoak slipped a dribbler single through a gap in the infield during the top of the 5th inning. Justin Smoak, Kyle Seager, and Raul Ibanez all walked against Holland, and other than an Quintero hit and force reach, the Rangers' lefty escaped in the 7th with only two hits. Pitching matchups are, at least to me, the most exciting thing in baseball, and today was no exception. But then the starters were pulled, and the floodgates opened up. And it was time for another game of baseball.

In the top of the eighth, Rangers' reliever Neal Cotts replaced Holland, quickly striking out Brad Miller on only three pitches: a devastating Fastball, slider, cutter combo. Well, it wasn't really devastating. All three pitches were out of the zone and away, parallel with Brad's head. Might as well make those mistakes this year, Brad.

But then Nick Franklin stepped into the batter's box, hitting right-handed against Cotts. As mentioned last night, Franklin has been in a bit of a rough patch lately, but his splits really aren't as drastic as they could be. He's hitting .247 against lefties and closely following with .232 against right handers with only 16 more PA's on the left side. After a called strike, Franklin immediately popped up behind Rangers' catcher A.J. Pierzynski, who threw his mask off and ran backward for the second out. Great. This again. But suddenly before any ball was being caught, Pierzynski was horizontal against the backstop and missing the falling ball, mere inches from his face. Saved! The at bat lived, and Officer Franklin walked. And one minute later, he was crossing home plate, after a Kyle Seager home run. 2-1 Mariners. Oh, sweet sweet justice.

The bottom of the eighth was a bit of a nightmare, however. Oliver Perez came in and quickly Wilhelmsened his way into putting two runners on base, first walking Craig Gentry and then beaning Leonys Martin on an 0-2 curveball he just couldn't get to break. I love Oliver Perez. But holy shit, he just didn't have his command tonight. It's as simple as that. Here's his at bat to Gentry, clearly trying to paint the upper corner of the zone and missing badly: 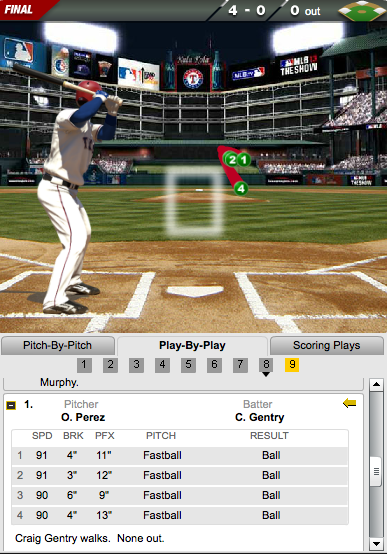 Ick. So in came Yoervis Medina to clean up the mess. I still don't know what I think about Yoervis Medina, but tonight may have helped. As he was walking out of the bullpen, my wife rolled her eyes, aghast at having to watch another Medina meltdown. I had to agree, initially, that I feel like there has been a lot of time spent watching Yoervis Medina shit the bed this season, especially early on. But then I realized that it's just that--watching, perception, reaction. I think it's the life of a reliever, to only take the mound when someone else blew it and being forced to clean up messes. Maybe you let a run get by, maybe you advance the runners, as Medina did here on an Elvis Andrus sac bunt. But when a starter gives up a hit and then escapes an inning, you celebrate. When a reliever gives up a hit with two on, it's obnoxious. Bum deal.

Here, Medina escaped scoreless, striking out Ian Kinsler with six (!!!) straight mid 80's curveballs followed by a 94 MPH fastball afterward. What? He then wisely walked Adrian Beltre before handing the ball over to Charlie Furbush, who threw three high-stakes sliders to A.J. Pierzynski to get the count to 1-2. This moment was probably the most intense five minutes of Mariner baseball I've seen all year, and it was well worth it to watch Pierzynski pop up on pitch four. The ball didn't even seem to break. Time stood still and it dribbled in the air like a sheet of falling paper, or one of those stupid bullet-time scenes that every director copied from the Matrix between 2000-2004. Furbush blinked in slow motion, Brad Miller mouthed something intense with his eyes shut. Speckles of dirt were in the air, 300 frames per second. The ball was in Kyle Seager's mitt. The Mariners were going to win the baseball game.

So when Justin Smoak hit a home run in the top of the 9th, it was just an added bonus. And it was in Rangers' Ballpark of all places. Somewhere, high up in the third level, some 23 year old stock broker at his first baseball game threw up his arms in disgust. See, he had been following the Rangers for a while--but not exactly following them, per se. Just enough to read the headlines on his ESPN GO iPhone app during his smoke breaks. He remembered seeing that alert a few years ago--something about a Cliff Lee, or whoever that was. He didn't really know much about the Rangers, but when he heard the name "Justin Smoak," he realized he had something he could counter in conversation with his friends who seemed to know the ins-and-outs of all things Texas baseball. I know that guy! he thought. I can talk about this one!

But it didn't matter. No one seemed to share in his disdain, lamenting what could have been if Smoak was still wearing a red batting helmet. His friends knew the Rangers would still be playing meaningful baseball in September, battling through a pennant race with a team with just over half the salary they had on the books. But still he drove home afterward, sad that his first Rangers game was a loss. Bummed that Justin Smoak helped close the lid on what should have been an easy Texas win. Maybe it didn't matter in the long run. Maybe it's just another game of baseball, one in one hundred and sixty-two. But somewhere, somehow, the Mariners ruined someone's night with their win. Maybe we don't need any overarching narrative. Maybe they just won a game. And maybe, just maybe, that's enough.