55-65: Joe Saunders decides not to pitch perfecto, for Felix

Raul Ibanez hit a 2nd inning dinger, but otherwise the Mariners stayed in the dugout, falling 7-1 to the Rays on Thursday evening.

Share All sharing options for: 55-65: Joe Saunders decides not to pitch perfecto, for Felix

Joe Saunders is a complex person. I guess you could say that everyone is complex in their own right, so maybe what I should say is that Joe Saunders is a complex pitcher. A very complex pitcher. Sometimes we all look up and it's the seventh inning, and he is holding the Angels to five hits with five strikeouts. Other times, the Mariners are suddenly down 2, then 4, then 6 runs in a matter of ten pitches. Joe Saunders is capable of a lot of things. One thing he is not capable of is instilling a sense of ease in my stomach before any of his starts.

So as you can guess, today didn't quite go the way Safeco Joe wanted it to. Remember that name? Hm. Heh.

Saunders didn't give up a hit until the middle of the third inning. Both Saunders and the Rays' Alex Cobb were off to great starts--and Cobb was particularly good early in this, his first start after getting hit in the head off an Eric Hosmer line drive back in June. It's kind of crazy to think that you can go from almost dying to pitching back at the top of your game in two short months, but what do I know about sports medicine?

As good as Cobb was, Raul Ibanez still managed to get to him with a home run in the second inning, his first since July 12th. It was a piece of good hitting, proving that as much as we love to make fun of Old Man River now and then, he knows how to hit a baseball better than 98% of everyone that has ever lived in the history of the world. Look at this:

Now, Cobb isn't touching 95 before dropping down to 80 or anything, but correctly predicting a 92MPH fastball after an 86 MPH changeup takes a lot of experience. Then again, it was also a 3-1 count. All Raul Ibanez had to do was guess wrong here and strike out. Maybe that's exactly what he's been doing since July 12th. Maybe...crap. Another month and a half of this, you guys.

But back to Saunders, who started unraveling mightily in the third inning. Before Saunders took the mound to walk Jose Lobaton, Rays Manager Joe Maddon came out of the dugout to apparently take a closer look at the ball Saunders was warming up with. The umpires got together, decided it wasn't doctored, and moved on. But it was enough to throw Saunders off his rhythm, which is exactly the same thing he tried to do to Felix one year ago today in the middle of his perfect game. The only thing more obnoxious than an offbeat, meddling manager like Joe Maddon is the fact that he is not the manager of the Seattle Mariners. Dammit.

So after the aforementioned walk and lucky force-out on a Sam Fulder grounder, Saunders piped a 91 MPH fastball inside to Sean Rodriguez, who popped it up off his knuckles about ten feet into the outfield. Nick Franklin and Brad Miller went running back for it, both nervously eying the falling ball and each other at the same time. Nick Franklin kind of waved his glove hand a little bit, as if he was saying hello to family in the front row. Miller sort of stopped running. So did Franklin. And at the exact moment the ball dropped into the outfield turf, Brendan Ryan crushed a handful of sunflower seeds with his bare right hand, gloveless, in the dugout.

Next, Wil Meyers hit a single to left that was misplayed in classic Raul form, allowing Sam Fuld to score from second and sending Rodriguez to third. And then after Saunders walked Zobrist to load the bases for Yunel Escobar, it seemed all to obvious what was going to happen. But thankfully, Escobar popped up to Brad Miller to end the inning, and the Mariners walked back to the dugout, shaking off whatever the hell had just happened there.

Kendrys hit a single in the fourth, but other than that, nothing happened, save for some obnoxious douche screaming in the middle of each Mariner swing to throw them off. But after Smoak and Condor made two quick outs in the top of the fifth, Dustin Ackley hit a roaring line drive double down the left field line. On (gasp) INSTANT REPLAY, it appeared that it actually bounced foul. A break! We only have one more year of this before it's implemented in 2015, so savor each and every lucky opportunity the Mariners are handed. Except, of course, it didn't matter at all. The Mariners loaded the bases for Nick Franklin and...well...Officer Franklin hasn't exactly been on duty for quite a while.

But let's look at his at bat before burning the house down here: 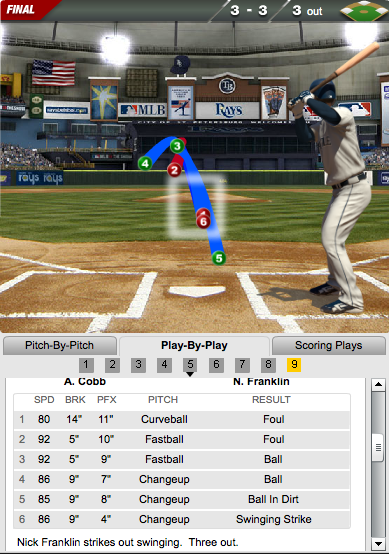 Nick Franklin is in a slump. He hit a single off Rays' reliever Jamey Wright in the eighth inning, but otherwise has gone 5-54 since July 31st. But let's look at this at bat in concert with that Raul Ibanez bat from above. Raul hasn't hit a home run in a long time, and he managed to guess lucky on a 92 MPH fastball in a 3-1 count. It very well could have gone both ways, but hell, Raul didn't even have to swing. He did, though, and guessed correctly. A lot of luck and timing had to go into making that dinger happen, and really, a lot of luck and timing have to go into making any hit happen at any given time in any major league baseball game.

Here, Nick Franklin got behind 0-2 fast. Just what a struggling young hitter needs to enshrine confidence. But then he fouled off a fastball and looked at 3 come-on-and-swing-at-em pitches outside the zone. He worked his way back up to a full count, and had just looked at two mid-80's changeups. So to guess fastball on pitch six doesn't make me worry about Nick Franklin. The fact that there even was a pitch six is a good thing.

But then the Rays came up for the bottom of the fifth, and it was an unmitigated disaster. Saunders opened his veins and bled all over the Tropicana Field Astro Turf GameDay Grass™ which was kind of rude, because you can't grow that stuff. But you can grow a Wil Myers, who doubled in Sam Fuld and Sean Rodriguez. And an Evan Longoria, who hit a two-run homer to bring it to 5-1 Rays, sending Saunders back to the dugout and bringing in Brandon Maurer. Poor Brandon Maurer.

The rest of the game was painful, and by the time Carter Capps gave up an RBI double to Wil Meyers in the 8th, all I could think was wait how did Carter Capps get into the game and haha Kansas City Royals. Gah. Thankfully we get Iwakuma tomorrow. Not the best way to spend the one-year anniversary of Felix's perfecto.

But you know what? At the end of the day, we should be thankful Saunders didn't throw one of his own. He was facing a no-no into the third inning, and I'm sure he realized how important that day was to us last year--how important it is to the story of this franchise both looking back and going forward. Well, he thought. I can't take this away from them. So he gave up a single in the 3rd. Well, he thought. I shouldn't pitch too great either...don't want to even steal an ounce of his thunder. So he gave up a run. Well, he thought. Now I can't remember how to pitch at all. And you know the rest.