It's a nice picture, isn't it?

Share All sharing options for: A Picture of Brad Miller Playing Baseball

One could theorize that my sensibilities as a baseball fan are informed a great deal by the team I've chosen to follow. Maybe I'm drawn to certain aspects of the game as a direct result of the Mariners not being very good for such a long time. In the absence of endorphin-flooding success and the hyper-intensity of postseason play, perhaps my mind has latched on to a different form of baseball entertainment and distraction. Or perhaps as an imposter, masquerading as a writer, I've molded for myself a focus on the game that best inspires artistic thinking and blustery shoegazing. Maybe I'm just a weirdo.

I said above that I chose to follow a certain team, that team obviously being the Seattle Mariners, but the truth is that there was never a choice involved for me. I was born one day, in the state of Washington—in the city of Seattle, no less—and then my wrinkled little pink body was moved about an hour north and there it stayed, for the most part, until returning to Seattle again about eighteen years later. All the while there was a baseball team, and we represented each other, by default, without question, for better or for worse. There was never a choice. The Mariners just lived in my house and were there, many hundreds of times summer after summer. I was able to turn them on and engage with them as much or as little as I liked. There were years where I took them for granted, and years when I loved them madly. And maybe that's a part of my fandom as well.

I would never assume that these things are unique only to me, or that I see glimmer in baseball where others see grime. To the contrary, I'm here, and I know I'm able to write this kind of nonsense and post the above/below picture precisely because I'm not alone in feeling and thinking this way. This knowledge encourages and enables me—and so if you're bored, or unamused, you only have yourself to blame. So there.

Let's look at a picture of Brad Miller playing baseball: 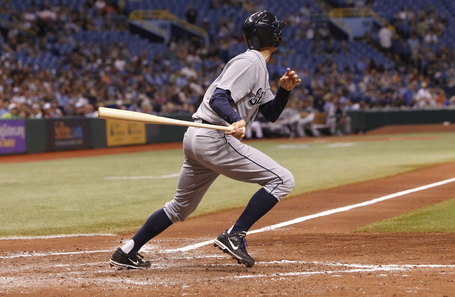 This photograph, in a word, is wonderful. This is an image of a triple being conceived. It would lead to two runs, and then the Mariners would lose some time later. But no matter that, just behold what is before you. The bat, the stirrups, the cleats, the hands. The long sleeves, contrasting the grey of the jersey but in perfect harmony with the helmet and the pant stripe and the socks. The green and the brown and the muddled and vibrant white. The tilt of the batter's head as he follows the ball from contact to air to outfield. The thousands of events that could follow this moment, the air suspended in anticipation. What we know happened and who was involved and what that could mean. This is a picture of a baseball player playing baseball. It's similar to many, commonplace even, but it is wholly unique and interesting and beautiful. It is still but alive. It is silent, but it speaks.