Brad Miller and some good relief pitching had the Mariners in position to win the series against the Rays. But then they didn't.

May 10, 2000: After dramatically rallying from a 5-2 deficit to tie on a David Bell 2 out, 2 run double in the top of the 8th and then taking the lead in the 9th on a Royce Clayton throwing error Kazuhiro Sasaki gave up a 2 run home run to David Segui. It was his first blown save as a Mariner.

"It feels bad to let the team down," Sasaki said in a somber Seattle clubhouse. "I did not think it was a pitch he would hit out, maybe only hit toward right-center field."

April 19, 2004: In the aftermath of a game that saw the A's and Mariners combine to go 0-22 with RISP in a 14 inning 2-1 Mariner victory (by balk-off) one of the easily forgotten moments in the affair's 4 hours and 47 minutes was Eddie Guardado blowing his first save as a Mariner.  Tasked with closing things out in a 1-0 game Guardado allowed for minimal drama when Jermaine Dye led off the inning with a home run. (P.S. This game featured a Raul Ibanez home run because Raul is eternal.)

"Garcia's potential victory was undone when Oakland's Jermaine Dye led off the ninth inning with a home run off Seattle closer Eddie Guardado that just cleared the wall in right field. Ichiro leaped at the wall but never had a chance to make the catch as a fan's glove got in the way."

July 18, 2006: The infamous maelstrom influenced, Mike Reilly butchered game.  Leading 4-2 in the 9th inning J.J. Putz entered and allowed 2 runs to the Yankees.  The final run scoring on a sac fly after Reilly blew a call at first.  It was Putz' first blown save as the Mariner's closer.

"I have pitched in worse; I pitched in snow in high school," Putz said. "There were a couple of pitches affected by the wetness of the ball, including that wild pitch. It got better when I hunched over and kept the ball in front of me to keep it drier.

May 31, 2009: In a high scoring affair the Mariners were unable to hold on to an 8-1 lead as they lost to the Angels 9-8 in Anaheim.  The loss marked the first blown save of new closer David Aardsma who, when tasked with the job of holding an 8-6 lead in the 9th had no command at all, walking 4 before allowing Kendrys Morales' single to finally end the misery.

"You could see it from the first pitch," said Aardsma, who walked the leadoff batter and issued three free passes. "Obviously, walks are killers and I was just gassed out there. I was giving everything I had. Everything on every pitch, but unfortunately, I definitely couldn't put enough close to the plate and make them swing."

May 10, 2011: After finally clawing out a run in the top of the 13th the Mariners saw their closer Brandon League turn hard won victory into heartbreaking defeat in a matter of minutes.  The Seattle reliever tortuously watched ground ball after ground ball find their way through the infield on the way to a 6-5 defeat. (Note: this game prominently featured Mike Wilson. In May. The 2011 Mariners were terrible.)

"A loss is always frustrating, but when you're battling, and you've played such a long game, and you ended up on top going into bottom of 13th, it's extra tough," said League, who blew his first save of the season after converting his first nine."

August 24, 2012: The Mariners had done the impossible. They stared down a 0.7% Win Expectancy in the 9th.  They had overcome a 7-2 lead.  They overtook the White Sox in their personal torture chamber in New Comiskey or whatever the hell it's called.  But, befitting their macro history as a franchise and their micro history against the White Sox Tom Wilhelmsen was unable to hold on.  A walk floated through a stream of singles and just like that, the Mariners lost 9-8. It was Wilhelmsen's 1st blown save as the Mariners' closer.

"It was a great comeback by our guys, that's what I'm thinking about right now," Seattle manager Eric Wedge said. "It was an emotional last inning. Obviously went back and forth, but to come back down five runs and score six against a good team like we're playing, it says a lot about our guys and how far they've come."

And so we come to today. Danny Farquhar didn't pitch terribly. Outside of the intentional walk he threw 8 of his 11 pitches for strikes.  After the Zobrist 3B he got ahead of Matt Joyce 0-2.  He then threw a pitch here: 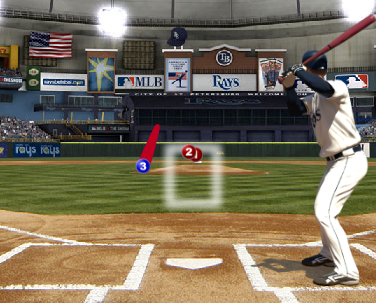 Joyce hit a ball that's an out if A) the infield is at normal depth B) the infield is real grass. It was bad contact on a decent 0-2 pitch that found a hole.  Farquhar then threw a bad cutter to Evan Longoria, who is quite good. Then Jason Bourgeois hit a fly ball deep enough to win the game. That's it. No meltdown. Yoervis Medina melted down. But then he shut down.  That is the binary nature of Yoervis Medina. His world is 1 or 0.

I'm not defending Farquhar's performance tonight. He didn't pitch well.  But more than anything he ran into the simple odds that say you can't save every one run lead every time. Nothing tonight screamed collapse. Every closer has blown saves and Farquhar will blow more.  It sucks.  This game was also Aaron Harang Vs. David Price.  That Danny Farquhar mattered at all is amazing.

"The good thing is, I failed a ton in the Minors. I blew a lot of saves down there," he (Farquhar) said. "Tomorrow is a new day. I'm a guy with a pretty short memory. I'll just forget about it and move on. There are 162 games, you can't dwell on one. I'll just move on and get 'em tomorrow."