The evolution of the sacrifice bunt: Part 5

Now that all the research has been presented, it’s time to draw some conclusions. Everyone hates the sacrifice and it's costing runs and wins. Should teams stop altogether?

Share All sharing options for: The evolution of the sacrifice bunt: Part 5

Over the past week and a half, we've looked at trends in sacrifice bunting and returned a few inconvertible truths:

So we've known for years that bunting is bad, that everyone hates it, that managers do it because that's how the game was played on their antique transistor radios. And we have Twitter now, so the masses obviously have the means for revolution. Should fans lead a crusade to end the bunt? Should we all wear "No Bunting" shirts to the ballpark and protest with our ten dollar beers?

No. It's just not that simple.

You can't use a simple catchphrase and encapsulate a complicated strategic situation. The sacrifice bunt is about more than just a single play; it's one of the rallying points for the saber/anti-saber battle. The pro-bunting side makes similarly canned statements like "playing the right way" and "valuing fundamentals". But you can't just make the blanket declaration that bunting is bad. Decreasing your team's chance of winning the game is bad.

Admittedly, as managers and players employ the bunt at present, they're doing just that. But I'm going to argue that it's possible, and even desirable, to lay down the sacrifice once in a while, in the correct context. All it takes is a little bit of patience, and a little bit of game theory.

For those who aren't familiar with game theory, a quick introduction. Game theory is a popular tool in the realm of political scientists, because it helps model how two different and often opposing actors seek to maximize their own gain. It's based on the economic principle of rationality, which states that everyone seeks the result of an action that is best for themselves. This ordinarily an extremely messy concept, because you have relativists and sadists and addicts and all sorts of people who don't act in a traditionally self-motivated fashion. But in baseball, we don't have to worry about that. The goal is to win, and every player in every situation (again, generally) seeks to do whatever maximizes his team's chance of winning.

All you have to do is set up a grid with one person's choices on one axis and the other's on the other axis. Then you map out the results, in terms of value or specific outcomes, which happen to each side. Usually, both actors make their decisions, then you go to that box on the grid and find out what happens. Enjoy the light and tragic example of Tom Wilhelmsen's 2013, oversimplified: 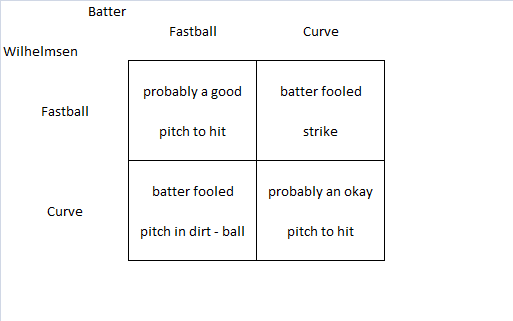 If these results are known to both players, they can decide before the pitch which way they'd like to go. It's not a tough choice. The batter has a dominant strategy: if he picks one way, he's better off no matter what Tom chooses. So he has no choice, and sits on the fastball. Our hero knows what the batter is going to do, so he picks the best option left remaining to him. The result: Tom Wilhelmsen, Tacoma Rainier pseudo-starting pitcher. Pretty cut and dry.

We all face strategic decisions like that in life, but they're so simple we don't even think of them as strategic: do I wear a seat belt? Do I touch this dead animal in the road? But most of the actual strategic decisions we face don't have dominant strategies, especially ones we repeat over and over. In these cases, the best method is to implement a mixed strategy, where we act differently each time, with enough randomness to avoid being predictable. This is how children approach rock-paper-scissors. In that game, your choices are truly random, but in baseball, they aren't. For example, Hisahi Iwakuma has a lovely splitter, but if he threw it every pitch it wouldn't be effective. Therefore he has to mix it up, throwing more split-fingers than other types of pitches because it's stronger, but never enough that the batter sees it coming.

Now that we've established some game theory, let's turn back to the sacrifice bunt, and particularly the plight of the maligned pitcher. I've often noted their continual and growing incompetence. 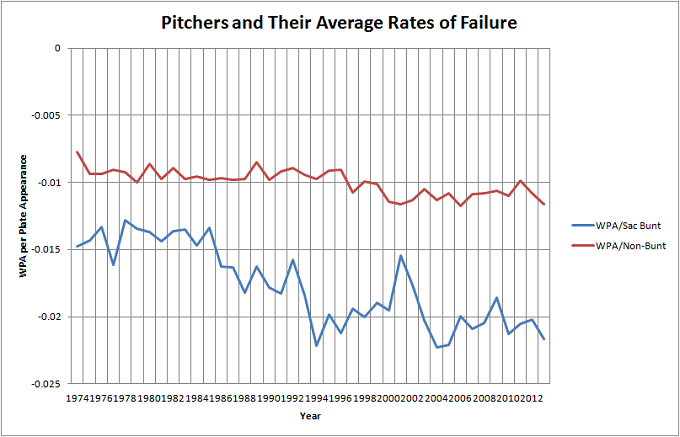 But have pitchers suddenly grown that much more incompetent laying down a bunt? Certainly, you read old baseball diaries of pitchers, and hear tales of pitchers lounging in the outfield, playing leisurely games of pepper and hitting fungoes, and compare to the relatively intense training regimen of the modern pitcher. Pitchers were men back then, men who could hit upwards of five home runs a year and never wore batting gloves or warmup jackets. Now, you're lucky to see one take the bat off their shoulder except to make an ineffectual wave at a center-of-the-plate fastball.

You look at that line and the temptation is to start counting the years until it reaches zero. Given their horrific performance, you'd be tempted to ask your pitcher to bunt in every sacrifice situation, right? At least you'd move a runner. Except instead of being the solution, that's actually the problem.

As Tango, Lichtman and Dolphin note in The Book (seriously, go buy it now), the sacrifice bunt situation is another example of game theory. The batter decides whether to bunt or not; the defense decides to position itself based on whether they think the batter will bunt. It's not a clear choice; with the infield in, it's more likely to get the batter or even force the lead runner. But because of their proximity, the infielders have less time to react to a sharp ground ball, leading to more base hits.

This is why in the original element in the series, I mentioned why it was tragic that we (I) don't have data on the locations of the fielders with each sacrifice bunt. This, more than any other factor, including the batter's speed or even their bunting ability, determines the likelihood that a bunt will be successful. What's more, unlike the usual game theory setup, the defense basically has to show its hand first by aligning its infielders before the pitch, giving the batter even more information. The batter acts, the results get tallied, the game repeats itself in the next situation, and the actors adjust their strategies accordingly.

"Baseball is a pastime that reflects on ourselves; we want it to have principles and truisms that we can rely on."

If everyone were wise and rational, then, you would expect to see a situation where the sacrifice bunt averaged 0 WPA: both sides would juggle their tendencies and revert to an equilibrium where bunting and hitting away were equally advantageous. Of course, this ratio would be different for each player: excellent hitters would bunt very rarely, in fact just enough to keep the defense on its toes. A pitcher would bunt more often, because the bar for breaking even with his hitting would be so much lower.

For all players, however, there is a cutoff point. This cutoff is a nebulous, hovering thing, and therefore it is unpleasant. Baseball is a pastime that reflects on ourselves we want it to have principles and truisms that we can rely on. "Don't make the first or third out at third base." "Don't hack at a 3-0 pitch." "Don't start Chone Figgins on three consecutive Opening Days." These are all rules to live by, comforting absolutes. And they're all, when devoid of context, misleading or just plain wrong. We use them anyway, because they're simple, memorable, and persuasive. They're sound bites.

So is "Kill the Bunt." It's an oversimplification, and a well-meaning one, because teams do bunt too much. But they shouldn't kill it. They should step on its neck and let it thrash around a bit.

The less catchy answer, but the more accurate one, is "Bunt as little as possible while still maintaining it as a possibility." It doesn't fit on a T-shirt.

The bunt is not wrong in and of itself. Like everything else, our judgment relies on context. Take the following ridiculous situation: what if Kyle Seager is swinging a really hot bat, and the other team decides to shift six guys into the outfield. Only the pitcher, catcher and first baseman remain. Is the bunt still wrong?

Of course not. Seager would happily bunt past the pitcher on the left-hand side and stroll into first base, and take that 1.000/1.000/2.000 triple slash that went with it.

So it is with the shift. As Jeff noted over at USSM, Seager faced a similar if slightly less cartoonish situation last week, with the shift on and a runner at third. With the left side wide open and the defense stacked, the outcomes of Seager's strategy changed, and it became wise to roll the ball down the third base line for the single. That single wasn't a given, but his odds of success were significantly higher than they usually were, and it made the gamble acceptable. Seager's bunt was a success not because it worked, but because a) it had a very good chance of working, based on the defense and b) it will affect future defensive alignments by showing his willingness to bunt. 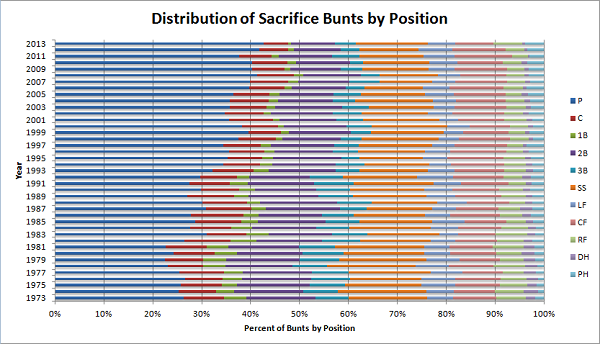 Coming back to the pitcher: by bunting too often, and by telegraphing their intentions, teams have actually made the sacrifice bunt less effective. Metaphorically speaking, they're picking scissors every single time, and the opponent has caught on. Even if pitchers can't hit, they need to try it more often if for no other reason than to keep the third baseman from inching closer and closer to the plate. History has proven that even as hitters diminish offensively, their bunting has diminished at an even more rapid rate.

It decreases a team's chance of winning by bunting too little and too often; either situation allows the defense to position itself advantageously. That baseball has historically tended toward the latter, and not only helped defensive alignment but sacrificed too many potential extra-base hits, is understandably frustrating to the progressive fan. But swinging away is not a dominant strategy; used sparingly, the bunt can provide a useful, surprise weapon in a batter's arsenal, to be used only as often as necessary to improve his odds in the long run.

But in baseball, as in politics, as in pageviews, hyperbole reigns. So cry foul if you feel it's the only solution for the game's weird, unhealthy love affair with the bunt; do what you must. But when a decent hitter bunts straight back to the pitcher and forces the lead runner, don't swear right away. Because every baseball player, no matter how great, should bunt once in a while. Once they overdo it, feel free to cup your hands and boo.