The evolution of the sacrifice bunt: Part 4

Breaking down the sacrifice by position, field surface, and inning, while establishing a new area of Mariner incompetence.

Share All sharing options for: The evolution of the sacrifice bunt: Part 4

The Sacrifice Bunt Miniseries Event last left off with the rather glum conclusion that the sacrifice bunt isn't providing the sort of returns it used to. Those bunts are rolling for hits as often as ever, but instead of proper sacrifices, an increasing number are becoming strikeouts and forceouts.

There were a few small matters I had to leave out of the last article, so I'll include them here along with some of the miscellaneous topics promised later. So before moving on to asking why the sacrifice bunt is so broken and yet so common, I'll ask and answer a few lingering questions.

Okay, pitchers suck at bunting. But which other positions are better at it?

Rather than drown the article in graphs, I'll provide a simple chart of averages for successful and acceptable bunt for each position. The graphs, as it turns out, are unnecessary, because they'd all look quite similar. Remarkably, most of these figures stay fairly constant for each position over the past 40 years, the only exception being the designated hitter. Given the DH's popularity as a repository for the old and enfeebled, their successful bunt rate has actually increased by about ten percent over the past four decades.

For a refresher on what types of bunts get categorized as successful and acceptable, please reference Part 3.

If you're sacrificing for the sake of sacrificing, it turns out that it doesn't much matter what position you play; everyone at the major league level is capable of facing a bat forward. Everyone, that is, except pitchers; but we'll hold off on them until next article. What's interesting among the acceptable ratios is that the pinch hitting penalty (batters tend to hit dramatically worse when they're called up cold off the bench) extends to their bunting ability.

The successful rates also bear some shockers. Those balky-kneed, circular catchers get up the line fairly well compared to their comrades. But the fact that first basemen, as a whole, have reached only one percent less than the fleet-footed shortstops is not something you would expect. And the performance of the outfielders are no fluke: we think of the right fielder as a position that's transformed somewhat from the seventies, but even in 2012 right fielders reached on sac bunts about as often as shortstops (21.3% to 21.4%, respectively).

Is it easier or harder to lay a sacrifice bunt down on artificial turf?

There are only two teams left that use a variant of the old Astroturf in their home stadium: Toronto and Tampa Bay. But in its peak, there were as many as a third of all teams using the stuff, even in outdoor stadiums. Those who remember the old Bill Veeck stories of pouring a dozen gallons of water on the grass when a quick, bunt-happy team came to town might understandably think that the artificial green might have an effect on the sacrifice bunt.

And one could see that argument going either way. The fast turf, one might claim, keeps that ball from dying in front of the third baseman, turning bunts into easy grounders. The opposition has a few of their own volleys: those fast grounders just force the infielders further back, don't they? And an even, pebble-free grass would help keep a good bunt in fair territory. So which is it to be? 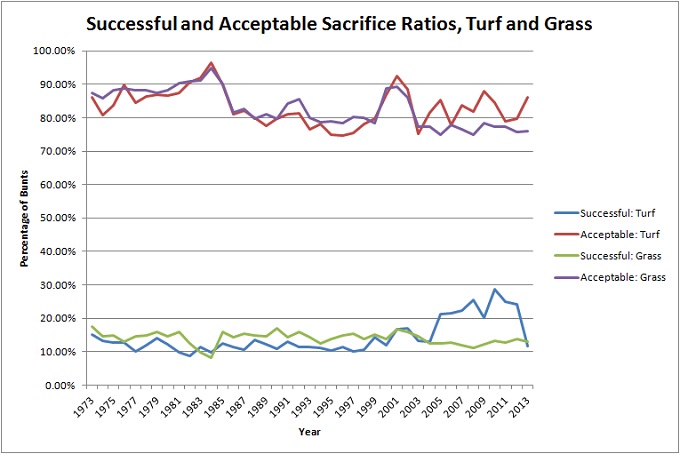 Grass, as it turns out, holds a slim advantage in both categories... until 2004, where everything goes out of whack. At that point turf suddenly becomes a huge advantage for the would-be martyr. Advances in technology? FieldTurf, an advanced version of the original emerald carpet, had already begun appearing in ballparks: Tampa installed it in 2000, Toronto in 2005. Minnesota used an alternate surface called AstroPlay in 2004. It's difficult to examine the results on a team-by-team basis, because the sample sizes are so small, and even combining all three to four teams (poor Montreal played its final season in 2004) doesn't give a lot to work with. But here's a graph for comparison purposes: 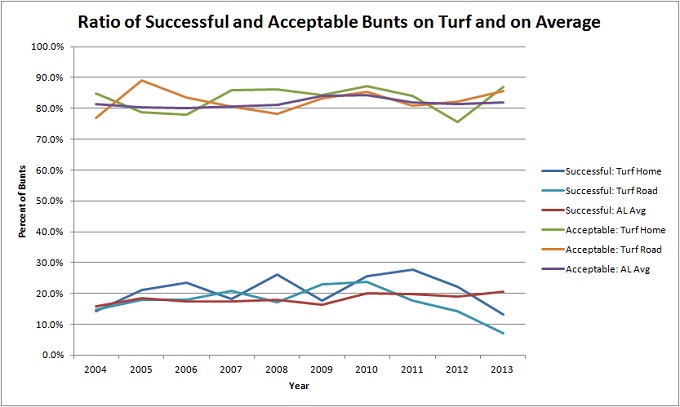 Both home and road teams performed slightly better on turf than the American League at large, with the locals slightly exceeding the visitors in average successful (20.9% to 17.4%) and acceptable (83.2% to 82.6%) sacrifices. Did the switch to FieldTurf benefit the bunt? It's possible; perhaps the more realistic field slowed the rolling ball, but infielders were still aligning themselves based on the old patterns. But it's more likely that the turf-based teams were better at bunting over that time, and even likelier still that it's just noise.

We've already established that managers do not discriminate as to the timing of their sacrifices, and lay them down in the first inning just as happily in the ninth. This is unwise, because bunting reduces the number of runs you're likely to score in an inning, and that's sort of a goal. So it's easy to mock those first-inning bunts as short-sighted and routine.

But before we do, there's more we should consider. In the comments of the last section, Nathaniel Dawson rightly pointed out that inning states carry different varieties of pitchers, with tough relievers more prevalent in the late, close innings. Since relievers as a whole have an advantage in run prevention compared to starters, we would expect to see some dropoff in success in these crucial situations.

Instead, what we see is this:

That's not a dropoff so much as a plummet. Hitters have significantly better results with the sacrifice bunt the earlier they do it. It's almost as if there's another factor here besides the quality of the pitcher. But that's for next time.

Yes, but this is a Mariners website. How have the Mariners performed at the sacrifice?

Well, they've performed like Mariners. The following graphs compare the team to the American League average. As with the quantity-based graphs, the Mariners graphs are a little less aesthetically pleasing due to their small sample size. 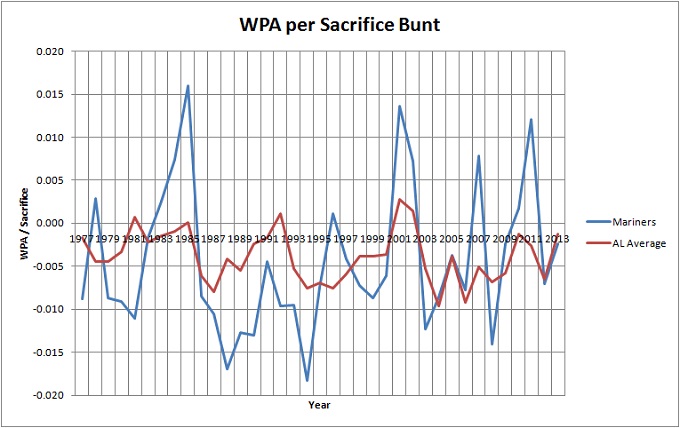 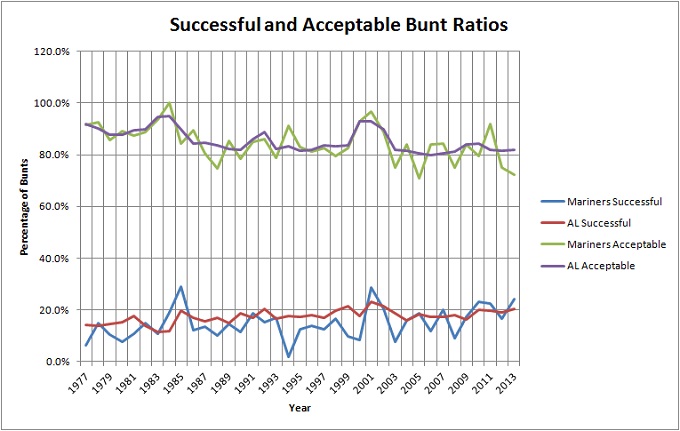 Those seeking trends in these first two graphs will have to look hard: the numbers are very volatile, and don't seem to match any nice preconceived compartments like managerial tenures, as our previous numbers did. The bunt worked well in 2001 because everything did in 2001; the reasons for 1984-5 and 2011 are anyone's guess. It is a little strange to see the team largely underperforming with the sacrifice bunt throughout the aughts, despite the presence of one Ichiro Suzuki atop the lineup. But we'll examine individual performance in a later article.

If we can't blame the manager, is there something we can blame? I ran scatterplots correlating the average WPA per bunt in a given year with various team statistics, and calculated the R-squared value for each. For those uninitiated in the use of trendlines and R-squared values, they range from 0 to 1 and basically tell us whether one stat has anything to do with the other. If one goes up when the other goes up, to the point where all the data creates a single line on a graph, that's a strong correlation. If the plots make a big cloud and you can't see a trend, the correlation is weak. I've included a table correlating some of the more intuitive statistics.

Baserunning WAR tops the list, but 0.1 is still extremely weak as far as correlation goes. There are three explanations:

1. There's a different statistic I didn't think of that correlates more strongly.

2. The skills that determine success in laying down bunts aren't reflected by any other statistic.

3. There is no measurable skill in laying down sacrifice bunts.

I'll devote a separate article to this question, which requires drilling down further into individual performances. But not yet having done so, I'm inclined to believe that there's some truth to both 2 and 3 (while admitting the possibility of 1).

Finally, not because it has any analytic purpose, but just because it's fun to look, here's a full breakdown of Mariners sacrifice bunts by result. Keep in mind that no Mariner has ever sacrificed his way to a double nor bunted into a triple play in franchise history. (To compare with the American League, open this graph in a new tab.) 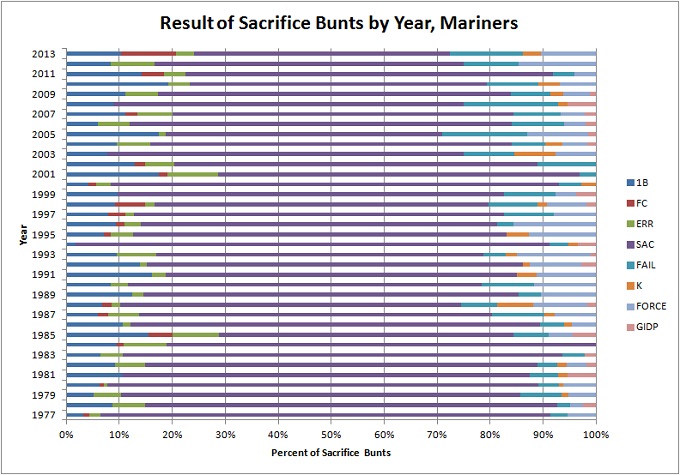 Having expended all of the whimsical numbers in my arsenal, the next article will begin to delve into real analysis. Using pitchers as a foundation, I'll attempt to answer once and for all the question of whether the sacrifice bunt is bad, and just why it seems to be getting worse and worse. The answer is that there is no one answer.