The Mariners beat the Brewers 2-0 on Sunday. I elicited the help of a national baseball writer on this one. Let's get to recapping:

So there's this Felix Hernandez guy in Seattle.

Probably not. Let me inform you. Felix Hernandez is an O-K pitcher on the Seattle Mariners. Today he pitched, and he was just that: O-K. I mean, he could've been better, really. He could have pitched another perfect game. He could have struck out 27 batters in a row. He could have even pitched a no-hitter. Hell, if he was really good he would have pinch-hit a home run in place of Raul Ibanez in the 5th inning and then gone the rest of the game without a left fielder because he didn't need one afterward. But no, he's only human. Just a boring ol' pitcher on a boring ol' baseball team.

Instead, Felix "O-K" Hernandez lasted a mere 8 innings and gave up 4 whole hits. 4 is a lot more than 0. He only struck out 9 Brewers batters, enough to solidify his name as the 2013 AL Cy Young Award frontrunner, but not enough to convince the voters to cave in and hand him the award today instead of waiting until after the season like they have done in every other year since its inception in 1956. Mediocrity, folks.

Instead of lasting the full 9 innings, Felix went 8 with 108 pitches, and could only muster 96 on his fastball. Look at this 8th-inning strikeout from Jeff Bianchi, and notice it wasn't a one-pitch strikeout, which is a real thing, and much more efficient than needing 8 pitches to get your man swinging. 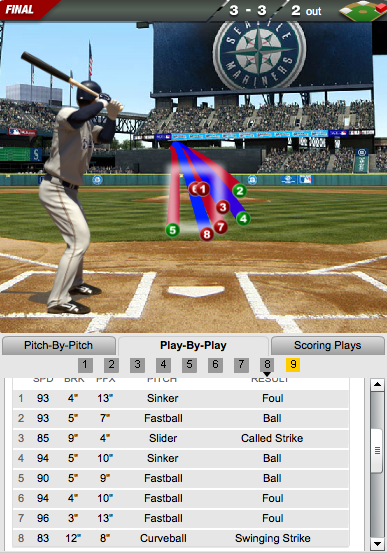 96 on pitch 7. Followed up immediately with a 13MPH drop on a curveball. Meh. He's just read the pitching manuals. Look at Mr. Hernandez's fastball velocity chart over the years and try not to fall asleep:

So the guy's velocity has been down. So he can still reach back and get a little extra on his fastball late in games. Whatever, I know another pitcher who does that sometimes and he has some silly award too. He's also on the cover of a videogame, so tit for tat. After the Mariners won the game, reporters were surrounding Felix's locker and asking him about needing a couple extra pitches in the 8th inning to strike out Bianchi and Martin Maldonado. Felix smiled, and shook his head in defiance. See, he explained, he didn't want to end these at bats in groundouts. He could have. But he specifically wanted to strike them out. Felix wasn't just pitching for the game, or the outs. Felix wanted to make these batters look silly, he wanted to catch them swinging, buckling at the knees. Meh. Sounds like a reckless ballplayer, folks. Too dangerous to have on your ballclub. Fun? Well...Competitive? Feared? At the top of the game? Hold your horses there, bud.

And the rest of the Mariners helped out Felix Hernandez too, I guess. In the 3rd inning, Dustin Ackley hit a second-pitch double up the middle and was sent to third on a Brendan Ryan groundout. Brewers starter Wily Peralta threw a wild pitch here, and Ackley scored with room to spare. Then, in the 5th inning, Justin Smoak deposited a second-pitch Peralta Fastball in the right field bleachers for his 13th home run of the season. Peralta wouldn't get out of the inning without giving up singles to Brendan Ryan and Henry Blanco, but Blanco was caught at second trying to stretch his to a double and the inning was over.

Oh, yeah and it looks like the Mariners might have a new closer for the rest of the season. No--don't worry, I'll wait for you to finish yawning, casual non-Seattle baseball fan. His name is Danny Farquhar and here is an at bat from his 9th inning today: 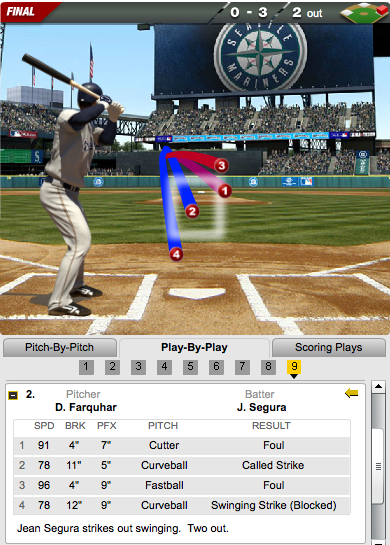 Looks like somebody wants to be Mariano Rivera with a curveball. What? He was a former Yankee? Worked with Rivera? He's only in his mid-20's? Still bored. Excuse me? FIP? What's a FIP? I don't care if his is only 1.87. You say that's 5th best in all of baseball including starters? And he's third best in xFIP? Better than Craig Kimbrel and Matt Harvey? Haha. "FIP." Come back after you've faced real hitters in the clutch, buddy. This 96-78 MPH curveball thing you've got going here looks nice but I've got a Rangers game to catch.

So here we are, back talking about Felix Hernandez again. I mean, the guy is good, I guess, but hell-ooo...how about the Detroit man, riding 17 wins? Headed for the playoffs? Now that's a real pitcher. I don't see this "King" Felix making his starts in a real city like New York or Los Angeles. And signing a back-loaded 7 year contract to stay on a losing baseball team just because you "like the city" and "want to win" there? Pfft. Who is this guy?

And look at this (if it ever becomes available):

Yeah. I mean, neat, fancy defense. "Best defensive shortstop in baseball." Hasn't started since whenever and can still pull a play off like this without a second's hesitation. Brendan Ryan wouldn't even need to be doing this if Felix struck the guy out. So have your fun, folks. Whatever.

If the national baseball media has taught me anything, it's to be wary of games like this, coming from a team such as this. And you know what? It doesn't really matter--it's not real baseball and it probably doesn't even count in the record book like this afternoon's Tigers/Yankees game. Did you see that? Now that's real baseball. Or how about those Nationals? You know, the Cubs and Cardinals played yet another game in their decades-old rivalry. And did you hear about Adam Wainwright?

Yeah, I thought so. Have fun with your "Mariners," fans. I would say see you in a couple of years, but we all know that isn't going to happen.*

*on the off chance it does happen, please ignore this entire article and remember that I was there to tell you that Felix Hernandez is the best pitcher in baseball, and that Mariners GM Jack Zduriencik sure has built up a nice youth movement here. But most importantly, remember that I was right all along and knew exactly what was going to happen before it happened.