50-58: Mariners fill car with vegetable oil, crash against own mailbox

Let's just forget this even happened.

Share All sharing options for: 50-58: Mariners fill car with vegetable oil, crash against own mailbox

Well, I don't know where to start. I've been staring at a blank page for like an hour now. I'll write a couple words, and then change my mind, grabbing them all with my cursor and erasing them as quick as I can. Then I look at the blank page again. It's been like that for about 45 minutes.

I know this sounds dramatic, and please forgive me. I mean, Ernest Hemingway once wrote an entire book about catching a goddamn fish, and nobody gave him crap about it. Well, maybe they did, but when you win the Nobel Prize, you can kind of do whatever the hell you want. Today the Mariners played a nice baseball game and then shit the bed, losing to the Boston Red Sox 8-7. They are going to get crap about it, and they can't do whatever the hell they want, because it was their own fault. The team led 7-2 going into the bottom of the 9th inning and they ended up losing the game. Tom Wilhelmsen came in three outs away from a win and proceeded to walk Daniel Nava and give up a 6-pitch single to Ryan Lavarnaway. Brock Holt hit an RBI double sending in Nava. Jacoby Ellsbury walked. The bases were loaded. A giant pit opened at the bottom of my stomach. Emptiness, my old friend. At least the Mariners have turned this emotion into familiarity.

You know the rest. Oliver Perez came in to clean up Tom Wilhelmsen's mess, and the door was still wide open. Shane Victorino singled, scoring Lavarnaway and Brock Holt. Dustin Pedroia came up and singled, sending Jacoby Ellsbury in. It was a one run game. So in came Yoervis Medina, who well, I'm tired of listing everything that happened in consecutive order. Go to gameday and look, but basically he blew it too, and the Red Sox won on a Daniel Nava RBI single. The very same Daniel Nava that started the inning off with a walk.

And look, I get it. What do we really have to complain about? The season was lost already, and the team played excellent for 8.5 innings. The Mariners got the scoring started early in the first, and rode through the first five innings behind actual productive offense and The King himself, who was absolutely dominant in this game. Felix lasted 7 innings and had a pretty good pitch count until late in the game, striking out 8 and only giving up 6 hits. His only run of the game came after he made David Ortiz fly into a double play to end the inning, that scored Jacoby Ellsbury before the play ended. Ellsbury was only on base because he did this, which is something that just sort of happens in baseball, and doesn't really mean anything about Felix or pitching, or strike zones, or hitting spots. 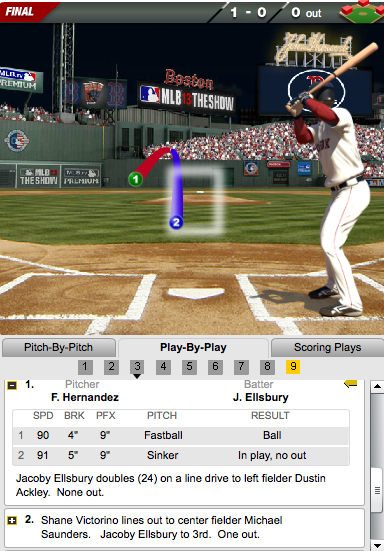 You know what else happened in this game? Henry Blanco hit a fucking grand slam in the 5th inning, his second home run of the year. Of course, six weeks ago in Oakland, his first home run was a grand slam. Take from this what you will. I'll take the part that says our 41 year old catcher who has a lot more playing time now that Mike Zunino broke himself can still do exciting things sometimes, and boy is that old man smile exciting to watch. Here's a .gif courtesy of twitter user @CorkGaines:

And while the sting of this loss will remain for quite some time, just file this guy below in the same place you put that goddamn picture of Mike Napoli with his jersey open if you want to feel better about everything:

But look, ultimately, tonight's meltdown is going to be remembered by two silly things that shouldn't matter too much in the long run. First: after Tom Wilhelmsen loaded the bases with whatever happened there, Mariners interim manager Robby Thompson emerged from the dugout, ready to put this mess behind him and get on the plane to Baltimore. As he stepped on the green Fenway turf, he lifted his left hand and tapped it for a second, reversed course, and called for Yoervis Medina to come in. As the Fenway bullpen doors opened, the umpires clearly remembered that awful pitcher/pinch-hitter/pinch-pitcher fiasco from Houston earlier in the year, and decided that Thompson initially called for a lefty, Perez, and by default, Perez had to come into the game. Medina turned back. And then you know what happened.

The next thing is this at-bat (first image courtesy our very own @colinokeefe) from Johnny Gomes, after Medina finally made it into the game. Look at pitch 6: 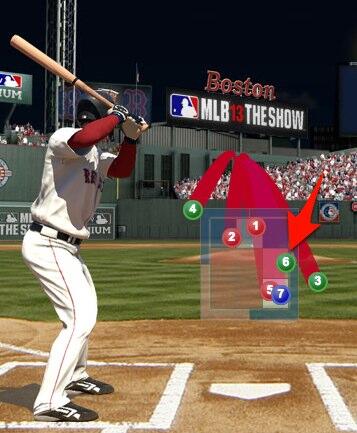 Looks pretty egregious. All of twitter thought so, including Divish and a slew of other beat writers. Were this called as a strike, it would have been the second out of the inning. The Mariners very possibly would have won the game.But here's what gameday classic saw: 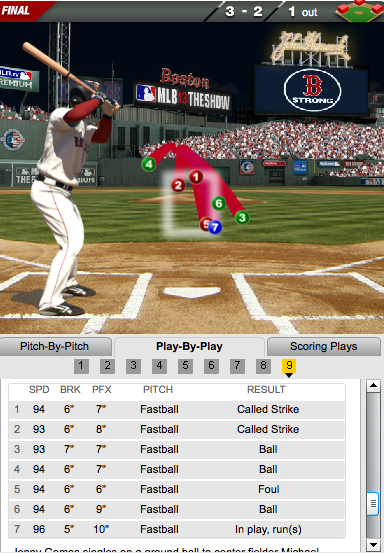 This doesn't look quite as bad. I'm not sure what the big strike zone difference is between the two versions of gameday, but I think we can all agree on one thing: None of this matters. The Mariners should never have been in this situation in the first place, and they only have themselves to blame. One high-leverage pitch or pitching change in the end of the game shouldn't even matter when a 7-2 victory is three outs away.

And this all argues how I feel about this game now that a few hours have passed since all those smug Red Sox fans left the gates of Fenway with stupid grins and the Mariners crawled into the visitors clubhouse in shame. This was a disheartening disaster of a loss. Felix yet again stood on one of baseball's biggest stages and showed the world how dominant he is, and his team let him down. The Mariners played in a game that makes it onto MLB Tonight's top moments of the week, and they were on the wrong side of it. It was a mess.

But ultimately, I guess, mehhhhhhhhhhh.

Before you freak out, listen. I was just as upset as you were after this game. Look at my chart. I was eating at a German restaurant that was playing the game at the bar and made a little scene at our table and it was embarrassing. It does suck to watch our star pitcher waste a game. It's actually painful to see our once stagnant offense put up some big hits and still drop a game miserably. Once again, all your friends who don't care about baseball will remind you how foolish you are for getting involved in all of this, and boy, won't you ever learn?

And maybe it is our fault. Maybe it's just felt so real this past month watching a team learn how to be professional, and maybe seeing a shitty game that rivals that nightmare in Cleveland from 2001 sucks. But it's good that it sucks. It's good that a bullpen meltdown unnerves us and sends us to drink. You know why? Miami's bullpen doesn't even really have opportunities to melt down. They just sort of play games where they are already losing, watching Giancarlo Stanton get intentionally walked every nine batters to face another soul-crushing loss. Houston and the Chicago White Sox have games similar to this sometimes, but I would bet you my last dollar that fans leaving either stadium just shake their head and say "Astros" or "White Sox" instead of "Dammit, Tom Wilhelmsen and also why the hell did Robby Thompson call for a lefty first and that call was awful and the Mariners had this game and what a waste of good baseball." See, we had a game to blow. That's progress. That should make us feel good.

Yeah, this was a nightmare. But tomorrow the Mariners will wake up and play the Baltimore Orioles, and Kyle Seager and Brad Miller will probably get some hits, and instead of thinking about yesterday, you might think about all of 2013 as an abstract idea. And then next year, if the Mariners keep this up, you aren't even going to think about tonight at all. Just remember that.

But it doesn't make tonight any less painful. I'm going to go to bed and say some bad words. Fucking baseball, man.