After a season of being roundly dismissed and ignored by most Mariners analysts and commentators, James Paxton has reclaimed some of his lost reputation with a recent run of hot starts in Tacoma. What's up with this guy?

Share All sharing options for: Musings on James Paxton

For a few brief, fleeting moments, the Tacoma Rainiers had an incredibly awesome starting rotation. Then Erasmo Ramirez got called up, and Danny Hultzen hurt his shoulder again, and Taijuan Walker hit a bumpy patch, and now the Tacoma Rainiers' starting rotation could be accurately described as mediocre. (Such is life in the minor leagues.) Indeed, the only relative constant in the Rainiers' rotation lately has been James Paxton, whose current ridiculous hot streak has piqued the interest of several different local sportswriters and bloggers. Since I am nothing if not a sheep, I feel compelled to follow along and pen something of my own on the subject of good old Mr. Paxton. Here follows that something.

Paxton was drafted by the Blue Jays in 2009, but failed to reach an agreement with the team and was subsequently suspended by the NCAA for having contact with Scott oh for God's sake just go read the Wikipedia article. Long story short: he is a Mariners prospect. He throws baseballs with his left hand, and sometimes they bend. Once upon a time, he was considered one of the Mariners' three most elite pitching prospects.

I say "once upon a time" because that time seems to be drawing to a close. Paxton has been surpassed in the eyes of many by Brandon Maurer, who made the leap from AA to the majors at the beginning of this season (albeit with less-than-stellar results). On MLB.com's own prospect ranking page, Paxton is actually listed as the Mariners' seventh-best prospect, behind both AA shortstop Chris Taylor and 2012 third-rounder Tyler Pike. An inflated AAA ERA and some mechanical concerns have seriously taken the shine off of Paxton's star.

For his part, though, Paxton has been working pretty hard to put the shine back on. In the month of July, Paxton threw 35 innings of 1.80 ERA ball, and though that ERA was doubtless deflated by a .245 BABIP and a 3% HR/OFB, a 3.48 SIERA is nothing to sneeze at. Paxton's been good. More importantly, he's been throwing strikes, which is something that he used to be pretty bad at. Did you know that, as of today, Paxton has gone almost 100 batters in a row without walking a single one? That's improvement. That's improvement that I can show in a graph! 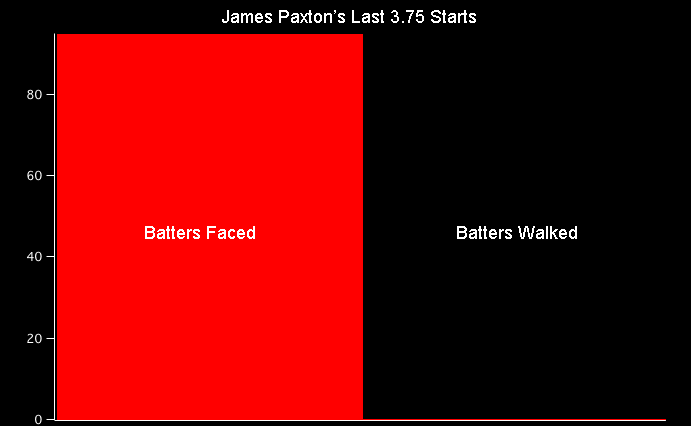 ...OK, maybe that's improvement that I can show in a slightly more useful graph. 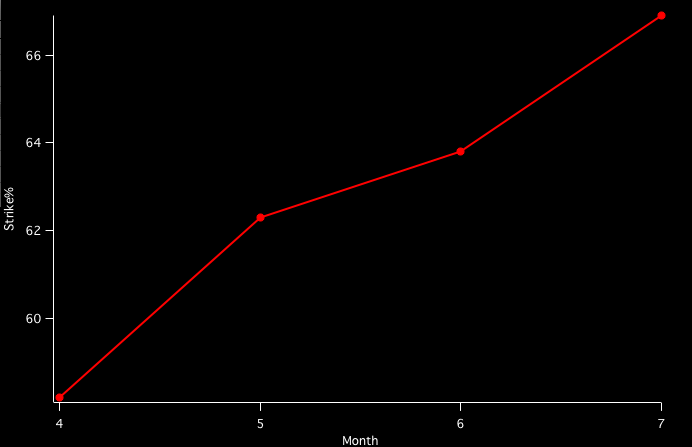 The point: Paxton has been encouraging. He's always been excellent at limiting contact, and now that he's started to throw strikes at a rate above 60% there actually exist some promising major-league comps for the guy. In the PitchF/X era, starting pitchers who have allowed contact rates between 76% and 80% while throwing 60-65% strikes have averaged a 3.74 FIP, which is really quite good. Over his career as a starting pitcher, Hisashi Iwakuma has a 3.72 FIP. I'd be thrilled to get that out of Paxton.

Here's the thing, though. It's easy to get misled by optimistic comparisons and strong single-month performances. In fact, I'd argue that those are the two ways in which we baseball fans most often trick ourselves into thinking a player is better than he really is. Justin Smoak is going to be Mark Teixeira! Dustin Ackley's first month in the major leagues has been amazing! You know the drill. And, as great as Paxton's July has been, it doesn't erase the numerous red flags that his minor-league performance has recently thrown up.

This guy has real issues as a starting pitcher prospect. Before this recent run of starts, he hadn't made a single outing over 6 IP in AAA. His changeup is still an inferior offering, which (as we learned from Brandon Maurer) could bode poorly for his ability to deal with opposite-handed batters. The inconsistent mechanics that scouts have complained about for years are still being complained about, though perhaps not as loudly as before.

Most damning of all is his age. James Paxton is twenty-four: older than Blake Beavan, older than Erasmo Ramirez, and only three years younger than King Felix. And the older a pitcher is when he debuts, well... 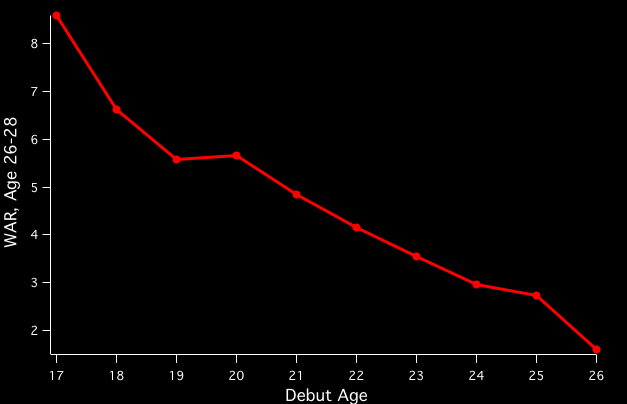 Basically, the older a pitching prospect is in his rookie year, the less likely he is to emerge as a good starting pitcher during his prime years. The above graph doesn't describe a small sample of pitchers from any particular era or any particular league; this age-arc principle has been a universal constant throughout baseball history. The truly great pitchers, the superstars... they refine their talent and earn a job in the major leagues far earlier than Paxton has. Yeah, he burned a year in the Indy leagues, but it's not like he lit them on fire. Yeah, he's been injured, but that's another problem in its own right. James Paxton is old, as pitching prospects go. That's a strike against him.

Don't get me wrong here. I'm not arguing that you should dismiss Paxton, and I personally wouldn't rank him below Tyler Pike on a Mariners prospect list. His increased strike rate is definitely an encouraging sign, and it looks like he could be a productive starting pitcher in the major leagues if things break right. But he's also still pretty flawed in several pretty important ways, and he's getting to be pretty old for a minor leaguer. The clock is ticking.