The Mariners took 2 out of 3 from the Cincinnati Reds with today's 3-1 victory. Joe Saunders pitched well. Tom Wilhelmsen got a save. Bronson Arroyo annoyed you by reminding you he exists.

Share All sharing options for: 39-49: Mariners forget they are playing Reds, win

In the past 48 hours, the Mariners played two very different baseball games. Over the years, this baseball team has instilled many different emotions in those of us who have made the foolish mistake of getting involved with them, and it seems all too easy to try and delineate some sort of trajectory during our time with them that mirrors a particular emotional response on any given day. I mean, maybe the Mariners are right on the corner. Maybe this lineup is an outfielder or two away from actually hitting. Maybe today was another cloud of smoke. Maybe they will find a way to screw this all up and fill out next year's rotation with Jeremy Bondermans and go all the way back to square one. All I know is that what this team has done over the past ten years doesn't have to matter for our fandom going forward, and yet, they have broken us in ways I didn't even know possible. It takes me five minutes after a victory like this to go from Wow! We really did it! That was for real! to No, no, no, even the best baseball teams lose 60 games a year and I hate this stupid team why did I ever get involved in this in the first place. When it actually happens, I'm not sure I'm going to know how to process victory consistently on a daily basis. We have been broken.

I originally had some great quotes from the game threads selected, but in the interest of not pointing people out who might not want to be, I'll just speak abstractly here. Yesterday the game thread was filled with a bevy of nihilism and I-told-you-so's that seemed absolutely valid and reasonable with the way the day's game--and the past ten years--went. Today, optimism and hope for the future was espoused, and though it was tempered with realism in true LL fashion, it really seems like there is something in this team getting people excited again. I don't think this would be the case if it were Jason Bay and Michael Morse out hitting dingers to put the M's around .450. It's just a glimpse of something that could be nice in the future, as long as Jack Z doesn't screw up in the offseason, as long as they don't sign another bust free agent, as long as we have a good rotation next year, as long as we don't trade for...

But about today. Joe Saunders pitched a great game, going 7 innings with 6 hits and only 1 run. More than 2 strikeouts would have been nice, but he's not a huge strikeout pitcher, and he put the Mariners in a good position to win the game early. Nick Franklin and Justin Smoak hit home runs because they are awesome. Lets take a look at their homers before we get too carried away: 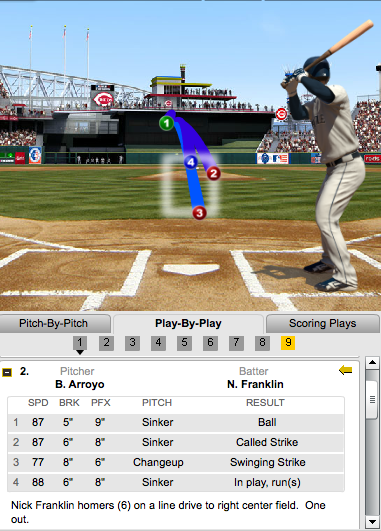 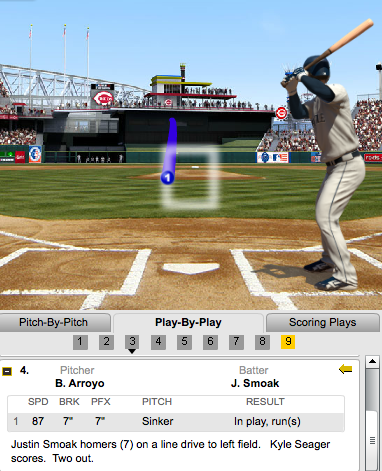 Drawing a great at bat and forcing the pitcher to throw you something hittable over the plate is definitely something you want to see from someone like Smoak, who I'm sure we all wish was as threatening to opposing pitchers as it once looked like he could be. And even though he got this right in his sweet spot, it was nice to see him able to also jump on a first pitch and put it in the bleachers instead. But these two home runs were mistakes from Arroyo. Franklin was behind in the count, and Smoak jumped on a first pitch. It might be an example of the sheer randomness of baseball, or what happens when a team that never plays each other brings out a pitcher to throw baseballs to hitters he has never seen. Or, our young hitters are making progress and learning to jump on mistakes, learning to hit homers in places they aren't always going to get them.

Arroyo actually pitched a really good game, putting up 5 K's and keeping the ball down off Seattle bats with an xFIP of 2.75, and a pretty lucky .188 BABIP. But baseball works one game at a time, and sometimes two out of 95 pitches are all it takes to win an entire game. Even if they were mistakes from Arroyo, they were hit far, and put the M's on the board. Even if Great American Ballpark is a hitters park, these two homers still count in the official game book. I hate hearing that qualm from people. Yeah, it's true that some ballparks are designed to maximize home runs. But the Mariners still go play baseball games there, and their home runs count just as much as the home team's home runs, at least for those games. At the end of the day, two of our building blocks hit home runs to win the game for the Mariners and that is one of the things we want to see from them, and they did it. Happy!

It was also nice to see Tom Wilhelmsen yet again skirt by without any trouble. After his meltdowns in late June, he has put out a couple of good outings while looking quite a bit different from the strikeout pitcher he used to be, and today he got his second save since June 10th. Maybe he's going to be a contact pitcher now. Maybe last year was a crazy fluke that came out of nowhere and this is what the Bartender is going to be from here on out. Whatever. I'm going to just bask in the fact that the Mariners took a series from a team with Joey Votto and Brandon Phillips and the rest of this year is going to be a lot brighter than I thought it was back in May.

The Boston Red Sox come to town for a four game series tomorrow, and Felix takes the mound against Jon Lester, who is pitching for a Red Sox team that is tops in the American League for some reason. This week is going to be pretty important to the rest of the season, so here's to hoping the right things happen, even if its something we might not seem like we want in the first place.