49-54: Mariners realize baseball is a story, lose one for suspense

A Felix Hernandez beauty wasn't enough to pull the Mariners through, as they fell 3-2 to the Minnesota Twins in extra innings. Thanks a lot, guys.

Share All sharing options for: 49-54: Mariners realize baseball is a story, lose one for suspense 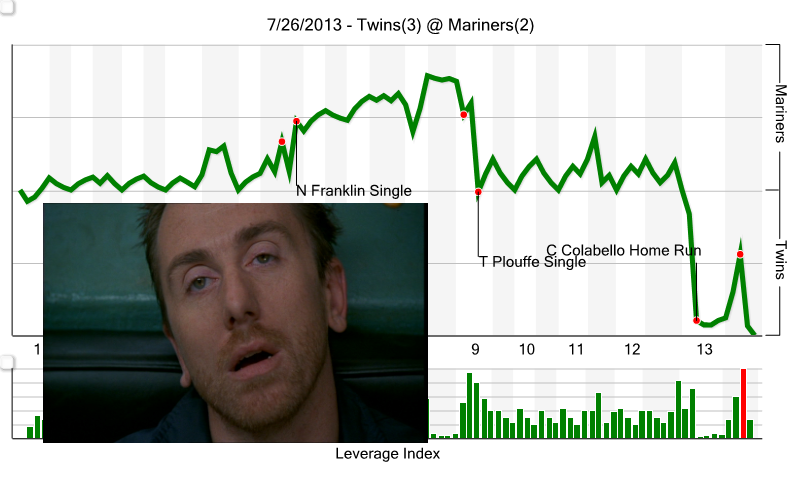 Well, I was excited.

See, the Mariners have been on a bit of a roll in the past couple of weeks, and this afternoon I found myself checking Twitter in hot anticipation for the day's impending baseball game only to see a report that Mike Zunino broke some stupid bone in his hand, and will miss 6 weeks of the season. 6 weeks.

Good lord. Just when a late summer push seemed possible. Just when it looks like something miraculous might be able to happen. Just when...well, to hell with it. It might have all been an illusion, but it felt pretty damn good while it lasted. So it wasn't the greatest news to see that the Mariners would be going through August with some new free agent catcher that I've never even heard of, all while John Jaso puts up 1.4 WAR catching for the team leading the AL West while only costing $1.8 million dollars. This will be the last I speak of John Jaso. Immanuel Kant once said that space and time are only the framework by which the mind constructs its experience of reality, which could ultimately be mere illusion. So the thing is that if I just forget about John Jaso right now, he never was on the Mariners, and there never was a chance he could be on the Mariners right now, and this whole catching problem the team is going through isn't even really a problem, because it was totally unavoidable in the first place. It's really a nice feeling, that of illusion.

So with all this news in the bag, it felt damn good to watch Felix Hernandez take the mound and pitch 9 innings of 5-hit baseball with 11 strikeouts. It was exciting to watch The King give up a leadoff single to Brian Dozier and then retire the next 11 Twins hitters in a row. It was exhilarating to get into the 8th inning after Clete Thomas singled, only to watch Felix strike out Aaron Hicks and make Chris Colabello ground into an inning-ending double play to save the 1-run lead. None of us know any of these players personally (if you do, I'm waiting for your phone call, I can be there in 3 hours flat). We can watch the Mariners get out of the 8th still scoreless, but none of us know exactly what goes through Felix's mind as he descends the mound, slapping his glove and screaming into the warm Seattle night, his jersey's top button undone and celebrating yet another inning cemented in baseball history from one of the best right arms the game has ever seen.

So likewise, none of us know exactly what went through Felix's mind when he gave up his only run of the game in the 9th that just so happened to tie the game, eventually taking the record out of Felix's control and sending the game into extra innings. We can have a pretty good guess, but we don't know. And that's a good thing, because as much as we all rolled our eyes and felt that annoying thing in our stomachs that feels like taffy being pulled in a thousand different directions, Felix probably was even more upset, facing win #12 against a team that spent most of the game handing him at bats like they were free samples at Costco. Then, whoops.

So dammit. Tonight's game was just one in 162, but it sure felt like it was ushering us into a new phase of Seattle Mariners 2013 play that would look quite a bit differently than the past few weeks of optimism and excitement. The Mariners managed to sneak 8 hits off of Twins' pitching, but they only scored 2 run through 13 innings. The first came after Nick Franklin whipped up an RBI single that sent Brendan Ryan home in the 5th. It should have been enough to win the game. But, of course, it wasn't, and the Mariners went into extra innings for the 15th time this year. Half the 23,000 fans took to the gates by the 11th, and soon a sparse crowd was all that remained, filled with empty beer cups mocking the remaining faithful, daring them to stay for just one more inning. No beer. No hits. No hope. Seattle Mariners baseball.

So what we had tonight was a whole lot of nothing for a whole lot of time while a whole lot of baseball was played. Sometimes, this game can be one of the purest and most beautiful slices of America one can ever experience. Other times, it feels like an exercise in futility, dragging on into the next calendar day. Tonight had moments of both. But I'll tell you what, it's really obnoxious to play 9 innings of baseball that mathematically put both teams in just about the exact same spot they were in before the 1st inning started, save for being tired as all get out because they just played baseball for four hours.

The exhaustion eventually got the best of the Mariners. Or, if you'd rather, the bullpen got the best of the Mariners. Yoervis Medina gave up a 2-run homer to Chris Colabello in the top of the 13th, putting the Twins on the board and eventually sinking the Mariners' ship. The M's have had quite a bit of bullpen problems this year, and while Medina has had his share of spilled milk outings, Colabello's home run was Medina's first given up on the year (and his career), after 38 innings. But it would be too much for the Mariners to overcome, and they would go on to blow the game after turning into dust sometime around the 10th inning, despite a Kendrys Morales home run in the 13th that made it a one-run game. There was a moment of hope after Kyle Seager came through with a single immediately afterward, but Justin Smoak grounded into a double play, and Dustin Ackley came up to the plate, and well....the Mariners lost.

And that's what's so frustrating about games like this. Nine innings of absolutely lights-out, spectacular All-Star pitching from one of the frontrunners for the AL Cy Young Award completely washed away after one little mistake. 11 strikeouts? A "complete game?" Welp. But, you know, it sure is a good thing he didn't get the win, because he didn't earn it, apparently. Just ask Harold Reynolds.

I don't know about you, but tonight really just feels different. Maybe that's a knee-jerk overreaction to one stupid baseball game. It probably is. But after this afternoon's Mike Zunino news, and then a dumb, random blip of a loss like tonight's, I sure wish the vibes from the past couple of days could come back. Maybe the M's aren't done adding, maybe Humberto Quintero is only a stop-gap solution before the trade deadline. I'm sure we'll all wake up tomorrow and feel fine, except for maybe Felix. And that's kind of the whole point about baseball, right? 162 games? Every day? The best teams still lose 65 of them? The game's greatest hitters fail 7 out of ten times? The defense has the b--okay that's enough of that.

1. We need a new catcher. Trade? Ride it out with Henry Blanco and Humberto Quintero? Wait until Sucre comes back? What do they do?

2. What's your policy on leaving games early? I fancy myself as a staunch, hardline loyalist. You don't leave the game before its over, no matter what. But even I don't think I would have made it through that awful 18-inning Orioles game last year.

4. What's your parking at Safeco secret?