The Mariners beat the Twins, 8-2. Hisashi Iwakuma is a peach.

Share All sharing options for: 49-53: Mariners play the Twins, guess what happened

So tonight the Seattle Mariners played a baseball game in Safeco Field against the Minnesota Twins, owners of a 43-56 record, good for third worst in the entire American League. The Mariners are only two spots ahead of these Twins in the standings, and while some recent hot play by Brad Miller, Nick Franklin, Dustin Ackley, and ah hell, pretty much half the team has a few eyebrows raised, this game was ultimately the first in a set against two teams who will probably be spending October evenings with their families rather than their bench coaches.

At least that's what it looked like on paper. It might be pushing it, but there was a chance this Mariners team could have looked at tonight's game a little differently than just another meaningless series. And if tonight's play was any signal of things to come, they are looking at this quite a bit differently. No, they played like a team both trying for--and capable of--competitive, playoff-bound baseball. (Not that that's going to happen. But still.)

The Mariners' Hisashi Iwakuma has been quite the pitcher this season, and despite a bit of a growing home run problem during his last couple of starts, he has consistently held great numbers, putting him near the top of a ton of statistical categories that the rest of the world requires to notice before realizing his greatness. I've always liked having a secret. But sometimes, getting your little secret known can be just as fun, especially once you've locked said secret into a multi-year contract under cheap team control.

This very same pitcher pitched a great game tonight, pitching 6 shutout innings, giving up only 4 hits with 9 strikeouts. He got out of the first in no time, watching Twins' leadoff hitter Brian Dozier bunt into a groundout on the first pitch of the game. That is a real sentence I just typed about a real Major League Baseball game.

Unfortunately for Twins' fans, the same greatness cannot be espoused over Kevin Correia. After running through the Mariners in the first inning by only giving up a walk to Raul Ibanez, Correia stepped in dog poop walking to the mound to pitch in the second. It was awful, the kind that gets stuck on the bottom your shoes and follows you around all day because you can't dig it out. But oh, the glee was felt by Mariners fans and players alike. First, Correia gave up a double to Kyle Seager that bounced off the outfield wall, almost having a chance to make it to third after an errant throw. Justin Smoak singled and was quickly sent to second after a Michael Saunders groundout. Then he noticed his shoes. Mike Zunino jumped on a first pitch, singling and scoring Kyle Seager. Next up, Dustin Ackley, scorinng Smoak. Scoring deluges are always fun, but sometimes the first thought that pops in your head is that this is all the pitcher's fault, and one shouldn't take too much meaning from any of the events in an inning like this.

But you know who might not feel the same way? Dustin Ackley, Mike Zunino, and Nick Franklin (who hit a three-run homer after a Brad Miller double the batter before). Some of those names have been struggling quite a bit at the plate this past couple weeks. Some of them have been struggling for months. Alright fine, one of them has been struggling for months. But even if blowup innings like this are statistical blips, they must feel great for hitters struggling to put together consistent at bats. And honestly, when I just shut my brain off, they feel great to me too. Random or not, this team keeps hitting, and every night it feels like the hits are coming from a new set of guys.

The rest of the game was as one might expect a pitching meltdown to give us. The Mariners tacked on two runs in the 5th, following doubles from Henry Blanco and Dustin Ackley. Again, that is a real sentence I wrote about a Major League Baseball game in 2013. The rest of the game was pretty uneventful, save for another bit of an icky 9th inning, where Oliver Perez got into a bit of trouble after striking out Chris Herrmann (see what I did there?). No but seriously, he struck him out twice. Look at pitches 3 and 4: 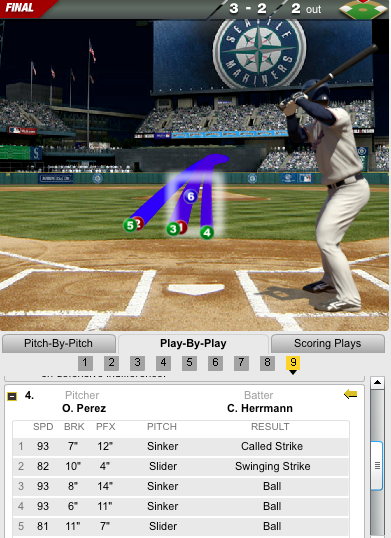 Yes, borderline, yes arguable either way. But stlll. What the hell, man? It's an 8-0 game, its late, just call this shit and go back to the hotel so we can start over tomorrow. And fine, there's the "integrity of the game" and all that, but strikezones change throughout the game all the time. I don't know. It's not that big of a deal, ultimately: the Mariners still won the game handily. But Oliver Perez was pissed. He caught Blanco's throw with his bare hand, biting his lip and staring daggers into the dirt. Not at the umpire, not into his dugout, not at the batter. The dirt. Herrmann went on to hit an RBI double, followed by a Dough Bernier double sending Herrmann in. Perez finally got Drew Butera to fly out to Dustin Ackley, ending the game, but dang. Another somewhat sloppy ending to a Mariners' blowout.

In other news, Mike Zunino was lifted from the game after taking a foul tip off his hand. It was apparently not serious, and he was just taken out for precautionary measures. Also the score was 6-0. Make of that what you will. Ultimately, this game felt quite a bit like many of the recent Mariners games we've watched from this team: a bunch of hits actually strung together to create runs, exciting production by a couple of our young guys, and a solid pitching performance slightly threatened by a sloppy bullpen. Tonight wasn't Oliver Perez's fault, but still--if this team is going to contend soon, I really think they are going to need to fix a few of these arms, or call for reinforcements pretty soon. Thankfully, Stephen Pryor isn't too far away.

I apologize for the lack of ridiculous metaphors in this game post or an exciting little twist that paints the adventures of our Heroes as some sort of narrative. It's actually very strange: this team is starting to actually toss out a series of games that look very similar. My Mariners nerves are tingling: and they tell me that something is up. Exactly what? I can't tell. But boy, is it ever exciting.