48-53: Mariners do all the regressing

The luck and skill finally failed at the same time and the streak is broken.

Share All sharing options for: 48-53: Mariners do all the regressing 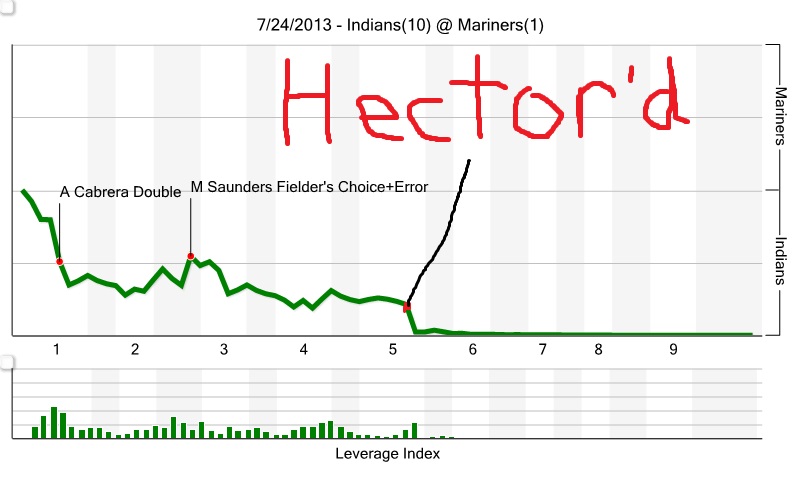 As I was writing this news broke on Eric Wedge:

Eric Wedge has been released from the hospital. He suffered a mild stroke and will miss some time with the club

The longer that Wedge stayed in the hospital the less this felt like the kind of dizzy spell caused by dehydration or travel and more like something that may be a bit more serious. Eric Wedge been a source of criticism because of his in-game strategy, the Mariners won-loss record during his tenure and the fact that he manages a Major League Baseball team. None of that means anything compared to his health and well being. Add on that he from all accounts is one hell of a stand up guy and we all wish Eric a speedy recovery and quick return to the clubhouse, so that we may continue to gleefully flog his bullpen use and lineups.

Screw this game. The Mariners were blown out. Joe Saunders had no command and as such his fringy stuff got smacked around by a good hitting Cleveland team. Hector Noesi pitched and gave up Michael Bourn's first career grand slam. The Mariners offense, despite The July Of Wonderment remains susceptible to quality left handed pitching. Michael Morse and Franklin Gutierrez should be harvested for healthy ligaments and put back together to form one baseball player that can actually play baseball regularly.

This winning streak was going to end and the Mariners had the decency to get blown out on a day game on Wednesday. There's precious little to talk about or analyze about today. This is a chance to appreciate a wining streak.

On most workdays I spend a good portion of the day checking the clock, impatiently waiting out the daily purgatory until I can be released to actually live life. This leads to a very chlidlike habit of checking the clock obsessively. The last few days I've gotten home, hugged my kids and then continued the same constant pattern of reaching into my pocket, pulling out my phone and checking the time. I was waiting for the jingle of this week's new alarm: 7 O'clock, time to watch the Mariners.

It's probably a statement more of my unfailing love of baseball than anything the Mariners have ever done that all it took was a three week stretch of exciting play to overcome a decade of leathery cynicism. This team isn't ready to contend, yet. But while it's often good fodder for pageviews to make a sweeping statement about the level of play we Mariner fans do or do not demand it needs to be understood that while the end game for the team is winning it's never been about that for us fans. We're here to have fun, plain and simple. Winning is fun, sure, but it's not the destination.

That paragraph sounds absurd when I'm spending words lauding an 8 game winning streak. I get that. Let me try to explain: When I think back on this winning streak what leaps out of memory isn't primarily the victories as much as the moments that made them up. I think of Brad Miller hitting 2 home runs in Houston and Nick Franklin wearing a stupid hat in the dugout. I think of last night's double play and of Tom Wilhelmsen loping his long-ass arm around Kendrys Morales' pudgy torso after the final out, with a big ol' dumb grin on his face. The difference between "Did the Mariners win Y/N" and "I just watched the Mariners and they won" is subtle but it exists and I think within that difference lies the meat and potatoes of following a baseball team.

Every baseball conversation I've had with my dad for the last five years has oriented around his refusal to take the team seriously. His complaints are legion and shared by many: Not serious about winning, Lincoln/Armstrong are the devil, etc. Even the surprisingly enjoyable 2009 team failed to dent his belief that the Mariners weren't worth money or time. Today I spent 20 minutes with him talking about Mike Zunino, Brad Miller, Kyle Seager and Nick Franklin. We talked about the possibilities of a miracle playoff run and the excitement we shared for next year. A father and son connecting over sports makes for sappy and easy writing. But very occasionally life is sappy and easy AND true. Thanks Mariners.

Questions for you, readership:

1) What and where was the best vacation you have ever taken?

2) What is the best film you've seen this Summer?

3) What is the best sporting event you've ever seen in person?

4) What is something you will do before you die but haven't gotten around to yet?