47-52: Zunino lifts Mariners over Indians, himself

The Mariners lifted their win streak to 7 games after a 2-1 victory over the Cleveland Indians.

Share All sharing options for: 47-52: Zunino lifts Mariners over Indians, himself

I'm not even sure how to begin this. Each game these past couple of weeks has brought a new series of circumstances and storylines and dramatic athletic play, and each time the Mariners have won the game. Each time. For a week straight, albeit with a few days off in between. But regardless--this is kind of starting to get weird.

The Mariners beat the Indians tonight, 2-1. It wasn't quite like the 12-5 routing of the Astros, or the sweep of the Angels a week earlier, but the boys in teal pulled off a W tonight, giving them their MLB-best 7-game winning streak. And it felt a bit more like a "real" baseball game this time, playing an Indians team with a good record and a bit of a push heading into August and September. See, if the Mariners truly are nearing contention, it only makes sense that they could walk over the Astros in a 3 game set last week. Or that they could sweep the Angels in a close, hard fought series. But tonight, they played a damn good Cleveland Indians team that cut off their arms and drank their blood last May, and instead of rolling over, they held onto their lead until the game's end. Maybe it was one day of revenge. Maybe they are headed face-first into two back-to-back losses. But you know what? That hasn't happened yet.

Do you remember that May series? This entire season has been defined by that awful week--after the M's came off a series win against the Yankees in New York, where Raul Ibanez returned to his former stomping grounds to unexpectedly crush a couple hits off of C.C. Sabathia and piss off the New York press. Then they went to Cleveland and saw a series of walk-off losses, setting the stage for a 2-game sweep by the Angels and a few losses at the hands of the Texas Rangers. It was a season ending 8-game losing streak, and it was bad. Really bad. It was my birthday that week, and I remember going to Buffalo Wild Wings (give me a break, we don't really have any Mariners bars in Portland) and getting laughed at by some asshole at the bar for asking the waitress to change the TV from Cops to ROOT Sports. I wish I was making this up. Then they lost miserably, again.

At the risk of playing what-if, let's think about what might have happened had the Mariners not shit the bed in that series. Lets say they came out of New York energized, bats hot and ready to score some runs (let's also say for the sake of argument that all the roster moves that were made afterward stayed in place and their record was exactly the same except for these three games. Dangerous, stupid, I get it, but let me have this for a second). What if the Mariners took 3-4? Well, right now they would be 50-49, still in 3rd place in the AL West. But importantly, they would be ahead of Cleveland in the Wild Card race--who right now sits at 52-47, tied with the Yankees for 2 spots out of the last wild card spot. But, what's done is done. Even if the Mariners sweep the Indians this week (ha!), their wild card spot remains the same--a perennial middle child, rocking a steady B- and a check plus on a fridge-drawing in a competitive American League playoff push.

So on to tonight. It's getting weird talking about these wins as isolated incidents, as if each one sort of just happened on its own. The Mariners have won 7 in a row, and at this very moment, they own the best winning streak in all of Major League Baseball. Tonight Aaron Harang gave up a home run to Nick Swisher, then kept the Indians scoreless through the rest of the game, giving up only 4 hits and 1 run over 7 IP. At this point in the season, I'm not sure what Aaron Harang is pitching for. His career? A future with the Mariners (please, please no)? Stats? I don't know. But when he pitches, it's either meh or wait, what? And both of those are better than a lot of what the back end of this team's rotation has been for a long time, so I'll take him, bad goatee and all. 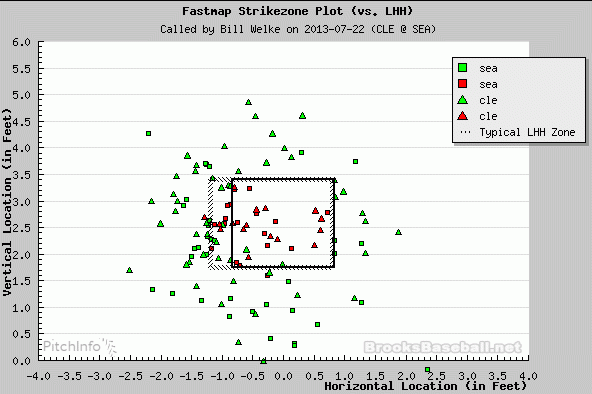 Woah. I mean woah. Many of us in the baseball blogosphere have complained about the LHH zone in the past couple of years, and thankfully, it usually works both ways for both teams. But tonight's zone was egregious. That little dashed-line zone next to the delineated strike zone is an aggregated "expected" strike zone that most umps have, by taking the usual LHH zone into account. But there are two called strikes that are questionable with that added buffer zone. And look at all the balls in there, even closer to the zone than some called strikes, keeping in mind that these calls are all the work of one man, and not multiple opinions or a rotating crew. All those green points that totally contradict the nearby red points within that square are a staggering display of ineptitude by a man who literally gets paid gobs of money to get this shit right a few days out of the week. How does this even happen?

You know, that said, the Mariners still won, and both teams got bad (or good) calls depending on how you look at it. Ultimately, tonight's game was decided on a few little offensive cues, and the Mariners took advantage of more good hitting that has carried over from the last couple of days. Kendrys Morales hit a solo home run off Ubaldo Jimenez in the 4th to tie the game, and it almost went foul. But then it didn't, because these are the 2013 Seattle Mariners and we have luck on our side because remember the past? Then in the 5th, Mike Zunino hit his first Safeco field home run, and it was beautiful. Dave Sims raised his voice in excitement for the first time in a month, and for a moment I started to get scared. I knew right then and there that the Mariners had won this game, and I didn't want to feel that way. It felt too good, too easy. Too perfect.

So it's led me to ask, and please, answer me in the comments: why are these past two weeks going as well as they are? Will there be serious regression or is this for real? Why does the hitting still continue?

Tonight, Mike Zunino went 2-3 with a double to add to his home run in the 4th.. Yesterday, Dustin Ackley had a productive day that if anything, gave him a much needed confidence boost (he went 1-3 today, but fuck it, you can't turn water into wine overnight). Even though Mike Zunino has been looking a little lost at the plate since coming up to the big leagues, he has gradually started to show progress--laying off outside pitches, gradually starting to recognize breaking balls. We had a huge conversation right here a couple of days ago about whether Zunino was rushed to the big leagues or not. I think it's pretty crucial to realize that in a lost season, pulling the trigger to call him up to get MLB practice probably isn't going to break him like a dropped glass vase--he's either getting his ABs here or in Tacoma. If he's going to show minor progress in both leagues, it's going to seem more frustrating here on a team that is filled with people who are expected to perform night in and night out, rather than playing baseball with Carlos Peguero. And maybe that's cheating some of the guys that already earned their way up here--but you know what? I'm not so sure it's that big of a deal. These guys who "earned it" are going to be playing baseball with Mike Z for a long time, and what better of a season to start blending in with the crowd than the one where the team caught fire and learned how to be a productive baseball club?

I might be rambling a bit here. But it's getting hard to separate subjective excitement about this team from either attempted analysis or tempered optimism about the future. We all know the playoffs are all but an absolute miracle of a long shot this year. So why does it feel so great to see what this team is doing right now, right here in July? We all feel good, and it has been a welcome respite from everything we have seen for the past couple of years, watching this team wallow on the bench in despair, hovering like flies in the dugout. We've watched Eric Wedge storm out of the dugout to pull Milton Bradley back like a five-year old throwing a fit, and for some reason, they never stopped to think that maybe they should just blow the whole thing up and start over. We've seen losing seasons and false hope materialize so many times that a week-long lucky streak should appear to us as just that--pure luck. But I don't think we are alone on this, as fans. I really don't think it is just luck. We've been saying a lot of words on this website lately about the future and hope and all that, but how does the team feel? How are they taking this? Let's take a peek:

Just look at this. Look at their faces. Look at their relief. After getting out of a close call, Tom Wilhelmsen slaps Mike Zunino's chest like a teddy bear. Smiles abound as the players trot to the outfield to give their obligatory high-fives. Apparently the Bartender and Kendrys Morales are best friends. Look at the way Kendrys hugs Tom here. It's like a child holding close to his nurturing mother. There is joy--real joy manifested on these players that just a month ago seemed too preoccupied to play baseball because they were busy mentally planning the dimensions of their caskets and the jobs they had waiting for them to dig their own graves. This excitement may seem a bit much for us fans. But just imagine what that clubhouse feels like tonight. And if they can keep this up--even at 50%, just imagine what it's going to feel like next Spring, facing the first truly competitive and meaningful most of these players have ever had waiting for them in their entire lives. I know I'm ready.