46-52: Mariners dangle carrot in front of Astros, pull it back with glee

The Mariners continue their MLB-leading six-game winning streak with a 12-5 Felix Hernandez gem over the Houston Astros.

Share All sharing options for: 46-52: Mariners dangle carrot in front of Astros, pull it back with glee

Well, the Mariners leave Houston with their second series sweep of the year, taking 3 games from the Astros that were by all accounts some pretty weird baseball. Not Weird Baseball, but strange nonetheless. A simple box score would tell you that the Mariners won all three games and might be turning it around. But a look deeper will show you that they almost got no-hit, let an opposing player with a career wOBA of .279 hit for the cycle, and watched a 12-0 lead almost halve with a bullpen meltdown that would have ruined the game had the Astros not had a little meltdown of their own in the 2nd inning. Now granted, most of these are nitpicks are meaningless in the greater context of the game, considering the cycle is just an arbitrary shiny badge given to someone who had a good night, considering the 1-hitter still produced 4 runs, and considering that today's pitchers that walked up to the mound with their pants around their ankles probably wouldn't have been in if it was a 2-run ballgame.

But nonetheless, it seems perfectly fitting that as we watch this Mariners team slide into competency, they carry with them remnants of their former tendencies. It is almost as if when the wins start racking up, the air in the clubhouse grows thick with unease as they feel something to be afoot. Then the bullpen comes in and does their thing, and everyone breathes a big sigh of relief. See, if everything was going perfectly right all the time, it would be something to worry about. A super low BABIP. An untenable winning streak. But to have cracks in the facade and the friendly reminder that half these guys looked like fools last year maybe makes it seem just a little bit more real. They may be bums, but they are our bums. Oh, and they aren't all bums anymore.

Today's real fun came in the second inning, when Astros starter Jordan Lyles fell apart at the seams, giving up a single to Kendrys Morales, allowing Kyle Seager to reach on an error, then walking Michael Saunders, after which he gave up an RBI single to Dustin Ackley, hit Henry Blanco after nervously letting a curve get away and scoring Seager (takes deep breath), gave up an RBI single to Brad Miller, and then the crown jewel of the night, handing Nick Franklin his first major league grand slam to give the Mariners a 7-0 lead in the top of the second inning. That was a long sentence. Probably not half as long as the inning felt to Lyles, who stayed in the game and actually pitched well through the third and fourth.

But then the fifth inning rolled around and Lyles started drowning again. After Raul Ibanez doubled and was sent in by a Kendrys Morales single, Kyle Seager came up to bat. He drew a few pitches, but then accidentally tossed his bat into the crowd and apparently bopped some four-year old kid on the head. As soon as the bat left his hands you could see Seager grow anxious, looking over and not knowing what to do. Hell, he may have just killed someone. The cameras panned over to show the boy in question with a red face, holding the top of his head as if to keep a hat from falling off in a windstorm. His expression wasn't fear--it was confusion. Was he hurt bad? Was he going to be okay? His father next to him was holding another child and moved over to console the little kid in order to tell him he was going to be fine--sometimes that's all young children need to know. They need to be told they are okay, and that whatever minor injury they just had isn't the end of the world. Kyle Seager still looked worried, and then the crowd joined in. Booooo!!! Boooooo!!! I was half expecting someone to jump up behind homeplate wearing a red flannel shirt with a Budweiser in hand, shouting "There he is!! GET HIM!" Eventually, everyone saw that the kid was fine, cheered him, and the game was back on. Then Jordan Lyles pegged Kyle Seager in the back with a 92 MPH fastball. He was probably nervous and lost his command, but still, it seemed all too perfect. The crowd roared with glee. Revenge was seething from the eyes of everyone in the stands--dripping out of their open mouths like a smooth, nourishing elixir. Kyle Seager took his base. He was in Texas.

Lost in all this tomfoolery was a great game by Felix Hernandez. The King only gave up 4 hits over 6 innings today, striking out 7 and only walking Chris Carter late in the 6th in an at bat where he was still hitting 93MPH with what PITCHf/x called a cut fastball. I don't think Felix actually has a cutter, but there are two different opinions. Also I have no objective evidence either way. Perhaps one of you can help me on this. But I tend to like the idea that he just gets his four-seam to break differently when he throws it really hard, which would make him yet again one of the most interesting pitchers in all of baseball. Of course, none of this really matters: today Felix Hernandez pitched a damn good baseball game and we got to watch it.

Lost in the shuffle a bit was a great day for Dustin Ackley. The struggling converted outfielder went 3-4 today with some well hit balls, and his only out drove in a run. One of these hits over 5 foot, 5 inch Astros second baseman Jose Altuve would have probably been an out against any other team, but hey, the stats count either way. And its great to see a day for the guy that might be able to build up some confidence for the long weeks up ahead.

There are two other stories to this game worth noting. The first is the nightmare bullpen appearance late in the game with a 12-0 lead. Hector Noesi had a decent 7th inning, striking out Justin Maxwell and getting Brandon Barnes to ground his way back to the Astros dugout. Noesi only gave up a run after Jose Altuve singled in Jake Elmore, and as is usually the case with Hector Noesi, he was fine until he felt threatened. Sometimes pitchers fall victim to damaging mechanical errors that need repair, sometimes they just have weird mental tendencies that are utterly unquantifiable. I still don't know what to make of Hector Noesi, but the first thing I think of when I hear his name is arresting heartburn, so I'm gonna go with my literal gut on this one.

After a clean 8th from Lucas Luetge, Bobby LaFromboise took the mound, 3 outs away from a 12-1 victory. It was sloppy as all get out. He gave up three singles and a walk before getting his first out, after which he was pulled for Danny Farquhar, who gave up a sac-fly that should have been an out. It probably was. But...more on that later. Next, Jason Castro struck out to end the game, but then of course it didn't end the game because Henry Blanco dropped the ball and the infield, running to catch his throw, looked a bit like Astros themselves. Next, Chris Carter walked. None of this moved the needle on the win expectancy chart, and the game was never truly in question. But man, this was painful to watch. Carlos Corporan finally popped out on a first pitch fastball from Farquhar. This bullpen...

The other part of the story wasn't really even that crucial to the story. But any time umpires make a series of totally indefensible, trauma-inducing blown calls, you just have to pile on. Apparently we fans have explicitly made it clear that we don't want instant replay. Bud Selig has said this, explaining that he gets a lot of fan mail every day backing up his point. He also has never sent an email in his life. I'll leave it up to you to imagine where these letters come from.

But Dear God, there were some nightmare calls in this game. In the middle of the 9th inning meltdown, Endy Chavez threw home on a sac fly that beat Justin Maxwell to the plate. Earlier, in the bottom of the 5th, Brad Miller bobbled a grounder from the very same Justin Maxwell, but clearly threw to first in time to get the out. Guess who was the umpire on the call? Yep--CB Bucknor, calling Maxwell safe. Later, I'm pretty sure he was asked by his fellow umpires between innings why he thought Miller was late on the throw. He said, "Well, he dropped the ball when he tried to catch it. That's an automatic safe call, right?" They all made subtle eye contact with each other and nodded, excited to have discovered something new about the game. See, that's the great thing about life. You never stop learning.

Calls like those two happen every day. But in the top of the 8th, Brendan Ryan grounded into a force out after Jose Altuve stepped on 2nd to get Kendrys Morales. Which is typically the way you get lead runners out in these situations. But see, the sweet pageant of baseball continues, opening our eyes to new facets of the game each and every day: 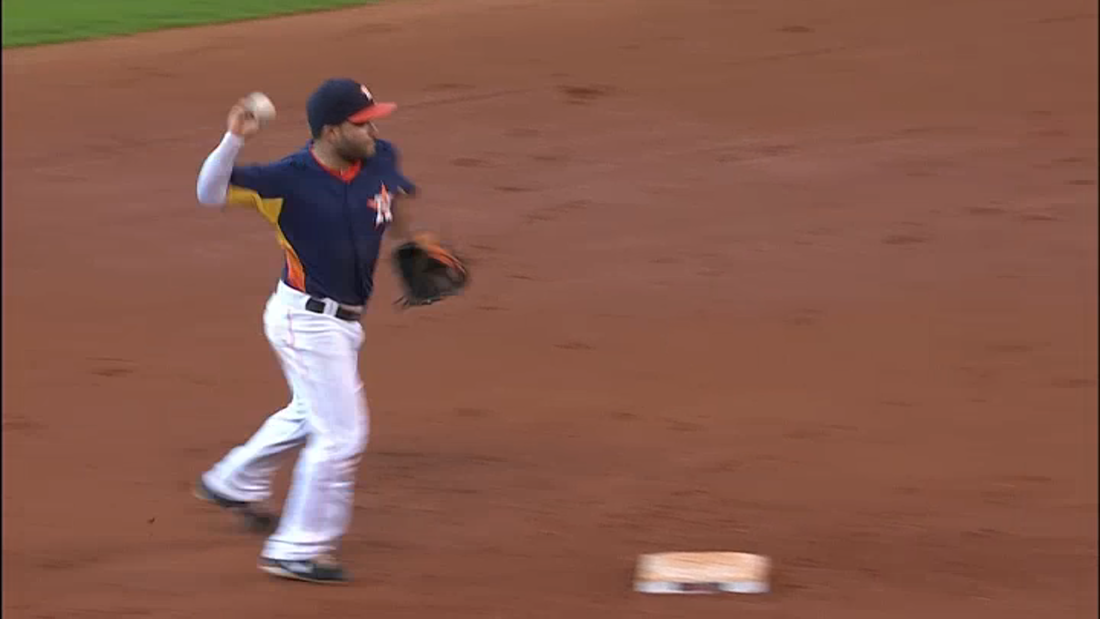 Yes. You are looking at the correct image. Jose Altuve never stepped on the bag at all. But like CB Bucknor has taught us over all these years, anyone can be safe or out if the umpire really wants him to be. So this was a force out. Nice of Dale Scott to join in on the fun.

Tomorrow the Mariners come home to take on the Cleveland Indians in a three game series that hopefully will look nothing like the last Indians' series in May. That was the week the Mariners took a face-first dive into a mound of regret with an 8 game losing streak that they are only now wading their way out of. If they can take 2 out of 3 from the Indians, this team is going to get really interesting. But to be honest, fighting off a sweep would be a welcome result as well. These next couple of weeks are going to be some of the most important games of baseball the Mariners have played in a long time. I'm pretty excited to see what happens. Besides, we have a month-long Astros break ahead of us. The Mariners may never get to play meaningful 2013 baseball against a team quite like this again.