Erik Bedard and the Houston Astros one-hit the Seattle Mariners Saturday night, but the M's still won 4-2. It's probably because Astros.

Well, the Seattle Mariners managed to beat the Houston Astros tonight, despite former Mariner Erik Bedard rendering the M's hitless through 6 innings with 10 strikeouts. Now of course, he also had 5 walks in a tie game during his no-no, which kind of makes the whole thing seem a bit ridiculous. But still, this was a Mariners team with 90 hits in their past 9 games, and it took them 8 innings to get a hit, which only eventually came off a deep double in the 7th from Michael Saunders. And that hit very well could have been caught had there not been a random hill in the middle of centerfield for Brandon Barnes to trip over.

So the Mariners won with 1 hit and 4 runs. Hisashi Iwakuma had a line of 7 IP with 7H, 2ER, and 7Ks, and had his first game without giving up a home run since June 16th. Trouble kept popping up when Kuma would get two guys on base and just squeak out of the inning safely. In the bottom of the 3rd, he gave up a single to Mr. Cycle himself in Brandon Barnes, immediately followed up by a Matt Dominguez single, sending Barnes to 3rd base. Kuma then struck out Jake Elmore and Carlos Pena, and got Jose Altuve out with a liner right back to himself.

The only two runs scored off Iwakuma was in the 5th inning, after Matt Dominguez singled and was immediately sent to third after a Jake Elmore double. Carlos Pena popped out, but then Altuve hit a deep fly ball to score Dominguez, and in the very next at bat, Jason Castro scored Elmore with an infield single. Iwakuma would give up one more double to Brandon Barnes, and make it through the rest of the game clean, handing the ball over to Charlie Furbush for a 1-2-3 8th inning.

It has gotten pretty easy to forget about Charlie Furbush this year. I've tried my hardest to ignore some of the stomachache inducing bullpen moments the Mariners have had this year, and all along, Charlie Furbush has been pretty okay, putting up a career low 2.93 xFIP and a K/9 rate of 12.68%. That's 10th for relievers in all of baseball, according to Fangraphs. Now, granted, he's been used as a bit of a lefty specialist, and that will pump his numbers up just a little bit. But you know what? This has been an alright year for Furbush, and tonight's 8th inning was no exception. He only needed 9 pitches to strike out Jason Castro and Chris Carter, and have Brett Wallace pop out to Brad Miller. And then, of course, Tom Wilhelmsen came in and did his new usual thing of getting everyone to ground or line out to end a game, and I still love the man and his bartending story, but I really hope he isn't the closer when the Mariners are in a September pennant race someday. If and when that happens.

Ultimately, we all know what happened in this game by looking at the stat line, but all I'm going to remember about it is how freaking weird it felt watching the Mariners get no-hit deep into the game against the Astros and Erik Bedard. No hitters are probably one of my favorite things in all of baseball, and if a Mariners pitcher gets out of the first without a hit, I ALWAYS, against all better judgement, start to wind up some mental clock in my head to ring after 9 hitless innings. It's only happened twice in my fandom life, and I don't even really like to count that Dodgers combined no-hitter because it felt different, but holy shit. Being on the other end of these things sucks. It's not frustration that the Mariners are going to lose the game, no. That happens all the time. It's the shame and the undue embarrassment to watch the Astros or Philip Humber make the Mariners look like fools, and since nobody every talks about the Mariners outside Seattle, it's always seems like it's going to just be another "Oh, well, heh. Of course."

Tonight was getting really old. It was getting extremely obnoxious. But then the walks started racking up, and before I knew it, the Mariners had 2 runs on the board and the game was tied. Wait a minute, I thought. Winning this game with no hits might be even crazier than a no hitter. And sure enough, it's only happened in a full 9 inning game once, also against the same Houston franchise in 1964.

Erik Bedard's control was all over the map by now. The former M's pitcher is notorious for having pretty low stamina, and especially at age 34 with three shoulder surgeries, 80 pitches suddenly gave way to passed balls and hanging curves almost hitting Raul Ibanez in the head. He would end up with 109 pitches for the night, and apparently when Bo Porter came to take him out, he gave him the option to stay in the game. Bedard himself insisted that he was done, and you have to give a bit of credit to a guy who was staring a no-hitter in the face, even though there was absolutely no way he was going to make it the whole game. Still, he's probably never going to get this close to a no-hitter ever again, and as meaningless as they might be to some people, they are exciting, tangible achievements for pitchers who probably could give two shits about SIERA and xFIP.

So Erik Bedard struck out a lot of professional baseball hitters tonight, and he was eventually done in by the same fault that plagues his every game: fatigue leading to poor command. But it was interesting to watch his performance, which very well could be the most Erik Bedard game of his entire career: a bunch of strikeouts, too many walks, a tired arm losing it in the middle of the game, and a few looks between pitches that betray his interest in the game as you realize he's thinking about hunting during the offseason instead of pitching. I wonder if he thinks in French or English.

The other weirdest part about tonight is that after the Mariners took the lead, I immediately began wondering if someone was going to hit a dinger to keep their streak alive. It's stupid, and meaningless, but man it would have been great, and I was consciously and earnestly hoping it would happen, preferably with Kyle Seager up in the top of the 9th, which would have continued the HR streak and his hitting streak. And then I realized that I've gotten to the point in this season were I don't feel a pit in the bottom of my stomach and command the Mariners to at least get hits in every game. Yeah, they were almost no hit, but after they got out, the first thought in my mind wasn't "I'll take this, this is fine, at least we got a hit." It was "Alright, Mariners, I would really like a home run to add to the victory, because you are going to win and I know that, so make me happy with something exciting." Maybe it's a stupid attitude. I don't know. But wow, I don't think I've ever felt that for even a second in the past three years. 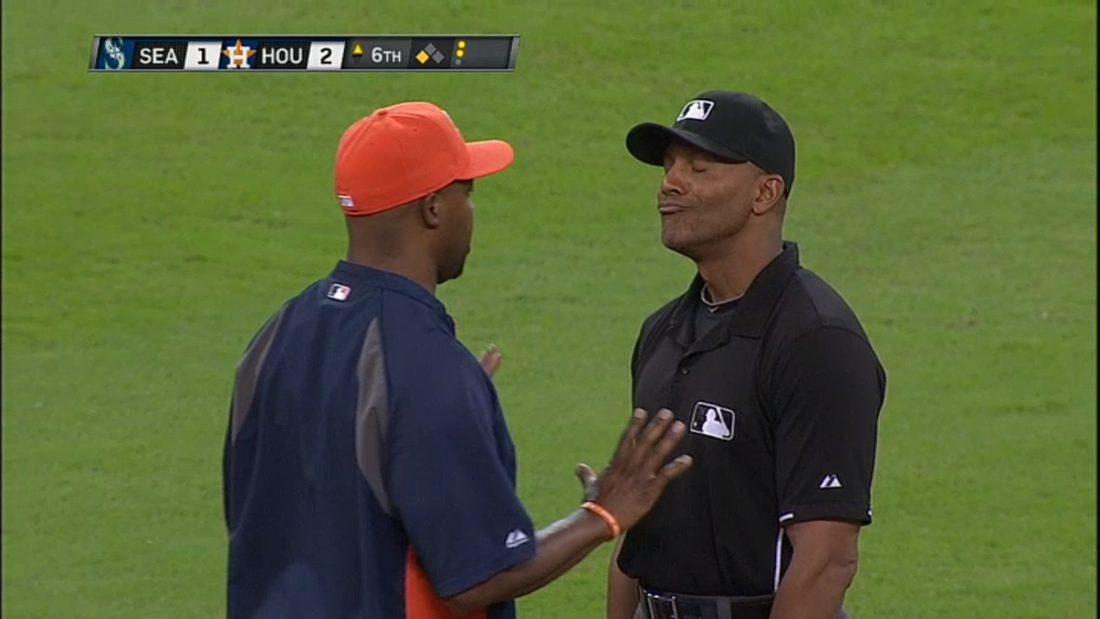 Look at poor Bo Porter. This isn't frustration over one call. This is understanding the cosmos is utterly indifferent to your existence. This is realizing that everything you put your hands to do crumbles into dust and dissipates into the ether. This is the face of the manager of the 2013 Houston Astros, who just watched his team hit for the cycle and 1-hit a team and still lose both games. This is a face that says Please, I need this. I need this, PLEASE. 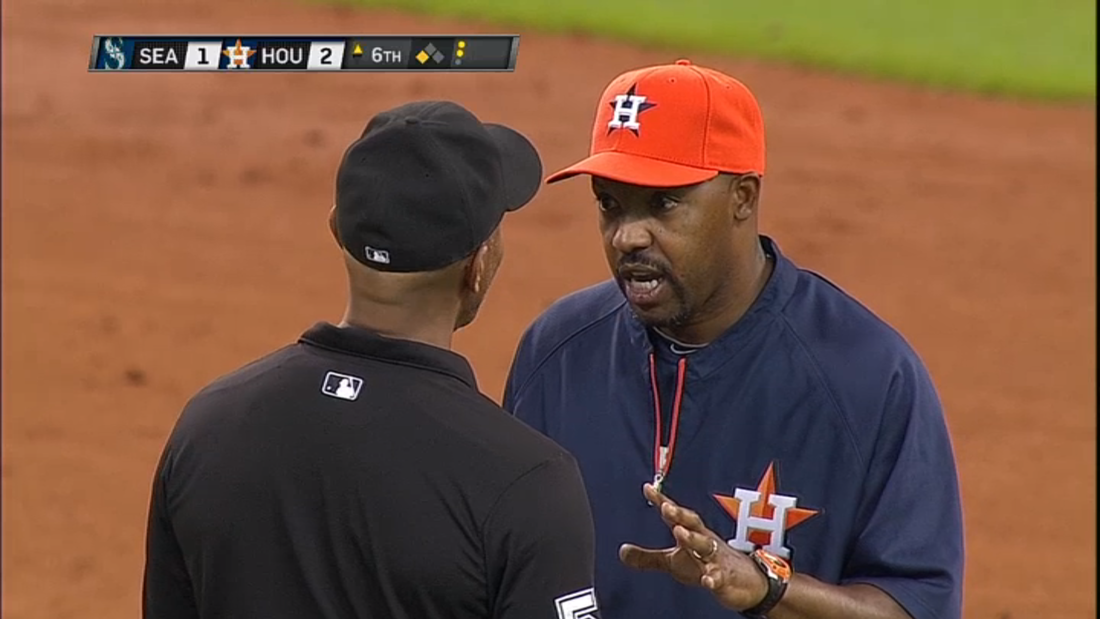 Someday the Astros are going to be a good baseball team, and Bo Porter might even be there. But as you and I sit under the shadow of the ruins of a building once named Seattle Mariners Ineptitude with a glint of sunlight showing its face overhead, don't tell me you don't feel a tiny, microscopic bit of empathy for this team and its fans. Just a little bit. But don't get carried away, these assholes were in the World Series in 2005.

Tomorrow Felix Hernandez pitches. That is all.