They are annoying. They do stupid things like hit for the cycle in a game they end up losing. They are the Houston Astros, and oh, don't we love them? 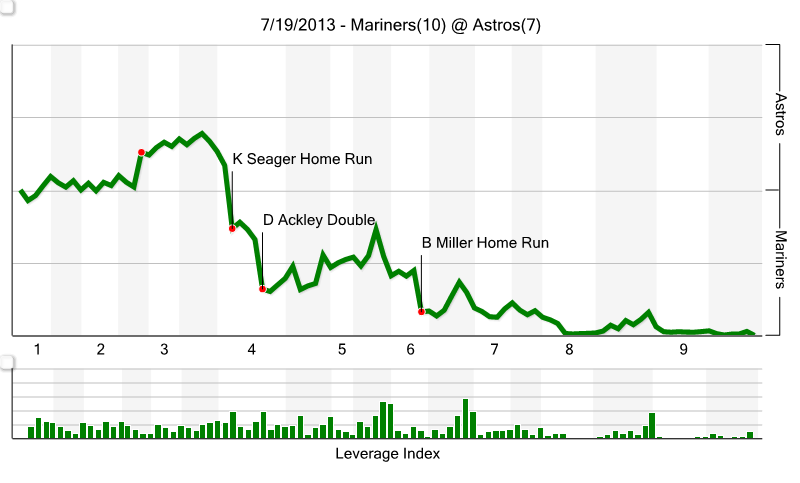 Some Other Metaphor From The Dark Knight About Sucking: Oliver Perez (-.056 WPA)

The job of the sportswriter is an abstract one, at best. The idea that we have decided to enshrine sports with a shiny gold "Story" nametag seems to betray the very nature of what sport is, but at the same time, the whole reason I ever started watching baseball and wanted to write about baseball is because I like stories. I like baseball stories, and I like sports stories. I want a narrative. We can have a single game narrative: The Mariners continued their hot hitting and Brad Miller hit his first two home runs in the same game against the Houston Astros. We can have single season narratives: After putting together an unlikely series of great July games, the Mariners turned the corner in August and moved toward the playoffs .500. Or an entire franchises' history as a narrative: Holy shit please win before I die this is getting really old.

But let's go back to that single game narrative. Who was the first person to decide that a single sporting match had a story? Was it some guy from ancient Greece, coming back into the market to tell his lame friend who never does stuff with him what he missed at the Olympics that afternoon? Did it come from boxing, which lends itself easily to narrative- injected with months of training and promotion, leading up to one single event with two outcomes, centered around two men? Is it all Grantland Rice's fault?

And what about film journalists, or book reviewers? Film and literature are obviously narratives, but those writers don't tell you the plot of everything they review. No, you're supposed to experience the work for yourself. Now, granted, the idea of writing about sports probably stemmed from an attempt to recreate the game experience for those who couldn't see the game because TV wasn't invented yet. And, yeah, if I were a Seattle Mariners "Reviewer," my writing would start to get old really, really fast. July 3rd: No. Mariners still suck. Will check back tomorrow /fin

So I don't really want to look at this game as a single narrative. No. That is why we leave Erasmo Ramirez in the 9th inning to get a CG for his first win, and he ends up blowing it and sending the game to an 18-inning snorefest with the Baltimore Orioles. Today the Mariners beat the Houston Astros, and much to my anti-Hegelian English literature professor's joy, we're gonna just look at some things that happened in the game randomly, instead of a part of a strung-together causal narrative because that 8th inning was a fucking nightmare. Let's think about good things. Let's think about how the Mariners just swept the Angels and hit a bunch of dingers and actually produced runs, and then they came into Houston and beat the Astros. Yeah. Let's do that.

In the 6th inning, Brad Miller started at two pitches outside the zone from Astros starter Bud Norris. The count was 2-0. He then noticed a 91 MPH fastball cruising through the middle of the plate and remembered he had never hit a home run in the major leagues. He remembered that he used to do this in Tacoma, and probably when he was in high school too, and realized that it might be fun to hit a home run. Well, alright, he thought. So he did. It landed in the second deck behind right field and a bunch of Astros fans booed, and a couple of others just watched because they see things like this happen all the time.

Then Miller came back up in the 8th inning and drew ten pitches before hitting his second home run of the game. Look at how beautiful this is. 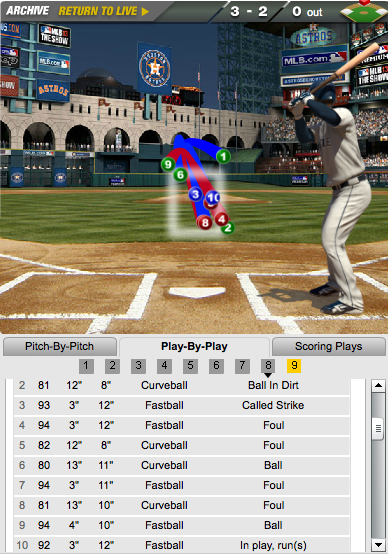 This same batter also hit a huge single on the very first pitch of the game. Yeah. Brad Freaking Miller. I don't want to resort to hyperbole and say you've Arrived, but...welcome to the next couple of years of your life.

After Brad Miller's second home run, Nick Franklin hit a roaring double for his second hit of the night. With another sentence that I feel like I've been writing a lot, all the Mariners got a hit in this game except for Mike Zunino, who had another game that added ammunition into the mouths of all those who feel that the Mariners 2012 first round pick was rushed to the big leagues. He probably was. But you know what? He's making progress. He struck out to end the 2nd inning, but he looked quite a bit different than the fool that struck out on four sliders at his feet in Texas a few weeks ago. Here's tonight's strikeout: 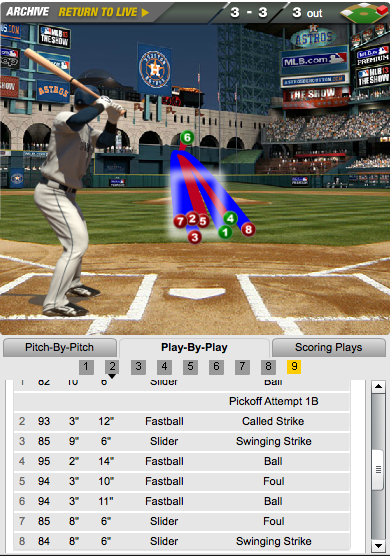 Now having never hit a baseball in either professional baseball or college baseball, I am probably the last person who can give you any description of the above pitching sequence. Pitches 2-3 looked like the Mike Zunino we all have come to expect. Pitches 4-7 looked like someone starting to figure something out. Or he didn't intend to take Bud Norris deep into a count at all and just got lucky. I don't know, take your pick.

Justin Smoak also hit a home run in the top of the 9th, extending his Not Disappointing Me While Slowly Inciting Optimism streak to more than a week, which is tantamount to suggesting contract extension for how the guy has made some of us feel over the past couple of years. It seems like his last couple of home runs have all been on first pitches. I wonder if this is going to cause pitchers to start adjusting their approaches, but I'm not sure what to, because Justin Smoak is surprising not just us, but possibly himself as well. Or he's listening to the veterans. All I know is I went to a weekend game series last summer and made it down to batting practice before the second. I was hanging out down next to the first base side with a bunch of annoying 10 year olds, and Lucas Luetge came up to sign a couple of baseballs. This little round twerp pushed his way next to me with a Derek Jeter shirsey on and threw his baseball in front of Luetge's nose like a dog showing off his bone and started yelling ARE YOU JOSTIN SMOAK? ARE YOU JOASTIN SMOAK? Luetge didn't say anything at all and picked up his baseball to sign it. I tried to look closely to see if he actually signed his name or not, but before I could notice anything, the prepubescent bowling ball took off and shouted back at his friends a few rows behind with a I GOT JOSTIN SMOAK'S AUTOGRAPH YOU GUYS! One of them told him he wasn't "Jostin" Smoak, and instead, that the got the signature of one of the team's relief pitchers. The kid got upset for a second, looked down at his ball, then back at Luetge, who was of course not paying attention to him at this point. He didn't hear him when the little brat yelled, "It's okay, yours is probably worth more than Smoak's anyway." I don't know what that stupid kid is doing right now, but if Justin Smoak keeps this up, I bet he'll wish that day went a little differently.

Tonight, Brandon Barnes hit for the cycle for the Astros. The Astros are a terrible baseball team. And yet, once again, they made the Mariners work really damn hard to win a baseball game where they were leading 9-3 going into the bottom of the 8th inning. While the Mariners eventually won the game, the Astros outhit the M's 16-11. That's ridiculous. Brandon Barnes ended up with 5 hits for the night. I'm glad the M's squeaked this one by, but next time, let's just get in and get out unscathed, what do you say, boys?

1. How was your week off of baseball?

2. How much longer are you going to watch this season?

3. Eric Wedge shaving his facial hair: Harbinger of doom or what turns this team around?