The state of the sacrifice bunt in Seattle

Bunting is generally awful. But bunting hasn't been as awful for the Mariners as you might expect.

Share All sharing options for: The state of the sacrifice bunt in Seattle

I like the bunt. Almost every sport has some kind of feint, a gentle misdirection. Tennis has its drop shot, basketball its upfake, football its pump. For baseball, it's the bunt. It's a matter of style. That's why it pains me to see the poor tactic rendered useless by evolution, victim of high-powered offenses, precision-mowed greens, and oversized mitts. The bunt gets a bad reputation, and most of that reputation is deserved, but there's a certain panache to the move that I can't deny.

Though often over-praised by the old guard and employed by managers as a way to be seen managing, the bunt isn't as terrible as it's made out to be. There are certain game states, with certain hitters, where it can be a useful strategy. And in an age of quantification, when a player's abilities are increasingly likely to be boiled down to a single static number, even turning around and pulling back on the bunt can prove an effective tactic for mixed strategy: it draws the third baseman toward the plate, which lowers his reaction time to a subsequent ground ball.

So there are exceptions. But often, bunts are simply an exchange of a precious out for the sake of one base for one runner: a mean exchange. They increase the odds of scoring a single run by decreasing the odds of scoring multiple runs. They put batters into two-strike counts if they fail to lay the bunt down. They're generally bad, bad, bad.

And the Mariners aren't actually that terrible about them.

Reviled as Eric Wedge is -- as a manager, as a talent evaluator, and as a wearer of facial hair -- he isn't that bad about bunting. First of all, he knows when to do it. Consider that the average MLB team has laid down 40 sacrifice bunts this season; the Mariners have only attempted 29. Now compare these two Excel-based bar graphs, each depicting when players are laying down sacrifice bunts (less than 2 outs, at least one runner on): 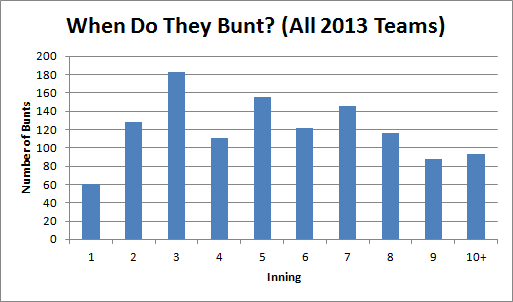 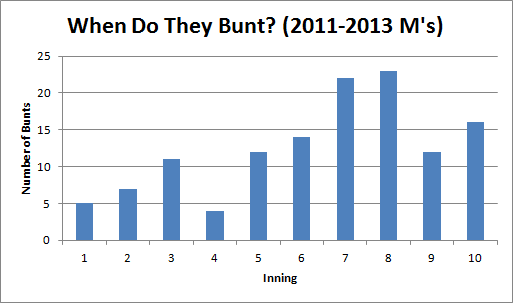 Furthermore, bunting is lamented for taking the bat out of the player's hands. These are the players who have had the bat taken out of their hands: 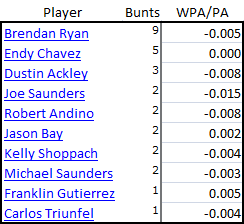 The WPA/PA statistic includes all PAs by the player in 2013, not just bunts. With the exception of Bay and Gutierrez, these have been players (at least this year) who are more likely to hurt than help in a clutch situation, even swinging away. Yes, moving runners over isn't that useful in a dinger-based offense, but give Wedge credit: at least he's not wasting his bunts on actual good hitters. Note that none of the new recruits have been forced to "learn to play the right way" so far.

So now that we've covered intention, let's look into effect. How have those bunts done? A pie chart, for the sake of variety, breaking these bunts down into three categories: failed bunts, successful but negative WPA sacrifices, and just good happy results like hits or errors. 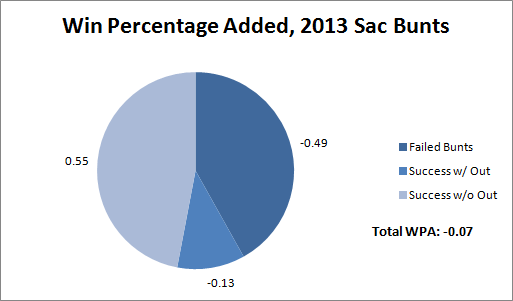 As the player with the most attempts, it's perhaps not altogether surprising that Brendan Ryan laid down both the best and worst bunt of the season, in terms of WPA. Ryan's fairly strong with the bunt, getting desired results on 50 out of 57 sacrifices in his career. His worst (-0.22) came from a failed squeeze against Texas, April 11, when Endy Chavez was nailed at the plate. The M's lost 4-3. His best (0.13) came against David Robinson of the Yankees on May 14, when Austin Romine tried to catch the lead runner and both players were safe. The M's lost 4-3.

All in all, the sacrifice bunt has provided negative value to the Mariners this season in terms of WPA; to be precise, it has cost them about one-fifteenth of one game in the standings. This is particularly impressive considering that so far in 2013, all 30 teams have attempted 1,202 sacrifice bunts and coughed up a collective -12.9 games through them. Eric Wedge has done less damage in the entire 2013 season than seven average bunts in major league baseball.

The Mariners bunt less than other teams. They tend to bunt later in games, in higher leverage situations, and with more optimal batters than the average franchise. And especially considering that doubles and triples are the team's primary weakness (the M's are 3rd in home runs and 15th in slugging percentage), the bunt actually works to the team's advantage, by moving runners into scoring position. So excoriate Eric Wedge all you want, please. But at least in this one tiny little aspect of the game, we can shut our eyes for a moment and pretend that this is a progressive franchise.