It's the last game before the All-Star Break, and officially the end of the "first half" of the season, even though we are a bit past that statistically. But we all know that narratives are much easier to formulate with clean, even distinctions like a week break between season halves, so lets just go into this pretending this is the week the M's turn it around. Or something. I don't know.

The Mariners are putting out the same lineup they did yesterday, which is wonderful. Hopefully Hisashi Iwakuma can regain some of his early-season magic and ride into the break with a W on his belt. The good news is that Joe Blanton might be able to help.

Blanton is having a weird year, putting up a 2-11 record with a 5.40 ERA. We all know that pitcher wins are one of the most meaningless statistics around, but holy crap, 2-11 in July. He also has an HR/FB rate of 18.2%, third worst in all of baseball. Keep that in mind while realizing that Justin Smoak, Raul Ibanez, and Kendrys Morales are all starting today's game, and will be hitting left handed against a pitcher who has a flyball zone profile that looks something like this: 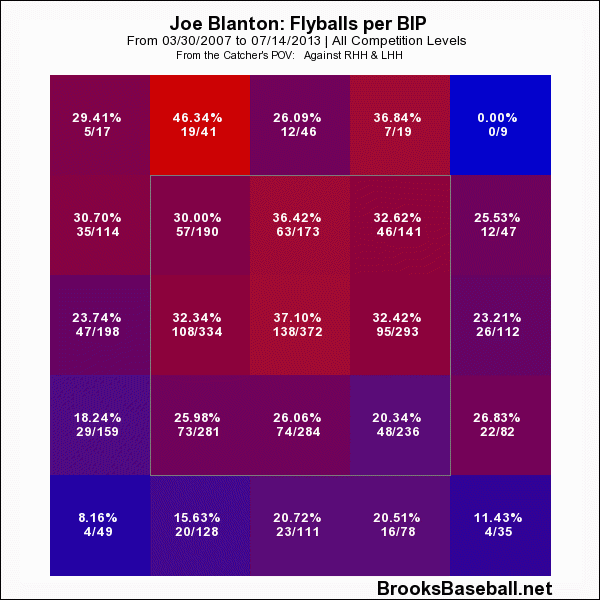 This is a bit unfair, but...here's Hisashi Iwakuma's by comparison: 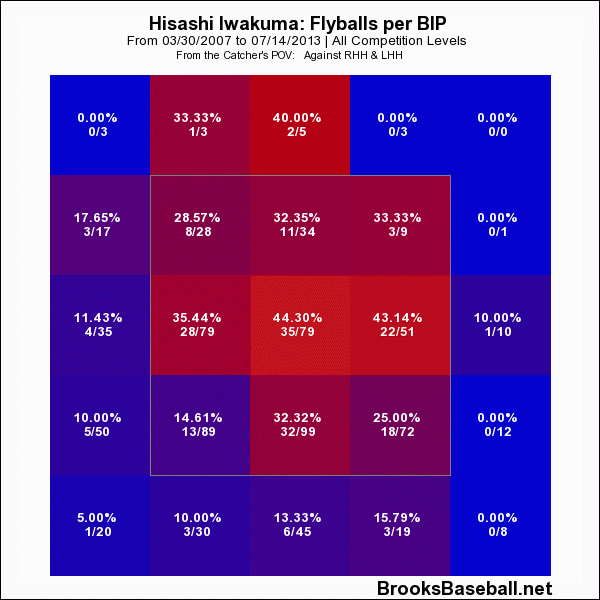 Now all of this said, who knows what Blanton is actually going to look like. The last time the Mariners faced him, they struck out 11 times, and only won the game in extras after getting Blanton out of the game. Blanton is still a servicable innings eater, and has been racking up the strikeouts in June, bringing his SIERA to 3.72. Joe Blanton is 2-11 and has an above average SIERA. The purpose of these past paragraphs has been to say that Joe Blanton has been pretty good this year and also pretty bad. At least we can say the Angels are giving us interesting baseball.

Here's to the series sweep and more offense!