King Felix runs over the Angels, pushing the Mariners to a 6-0 victory behind 8 shutout innings.

Share All sharing options for: 42-52: Mariners beat Angels: on progress

-On the night of October 28th, 2012, the San Fransisco Giants beat the Detroit Tigers 4-3, bringing the World Series trophy back to the Bay area for the second time in three years. Buster Posey won the National League MVP with 94% of the vote, and alongside footage of Matt Cain's perfect game was a bug-eyed Hunter Pence stoking a fire in his teammates to rise to victory as if he were speaking directly to every one of the 42,000 fans in AT&T Park each night. Winning felt tangible--in the air like a familiar smell bringing back a lifetime of memories, and Giants players were prepared for its scent in the dugout as if they were all fans themselves.

But all the way at the bottom of the bench, swimming in a large black hoodie sat a former Cy Young award winning pitcher, nursing a 5.18 ERA on the season with a new role in the bullpen--reminding him each and every time he heard his name from the pundits and the experts that perhaps his day was done, and that the sea of Giants jerseys filling the stadium now held more 28's than 55's. His struggles on the mound were well publicized, as was his discomfort with the new face of the franchise that was so often now on the receiving end of his wild pitches. He accepted his demotion with class and professionalism, but was readily aware that his was a script written and performed before by so many other players, burning so bright for so brief a time before transforming into a cloud of smoke.

-In that same 2012 season, the Seattle Mariners posted a 75-87 record, and despite successful post-All-Star break play, landed once again in the gutter of the American League West, dashing the playoff dreams of a rebuilding franchise that now seemed destined for management upheaval and clubhouse retooling. The team's opening day leadoff hitter was Chone Figgins. Catching duties were split between a 22 year old rookie and Miguel Olivo. Touted prospect Justin Smoak spent part of the season in the minor leagues. He put up a wRC+ of 85 for the Mariners, but that was helped by what looked like a lucky September and some tape measure hitting. His line on the year was .217/.290/.364. A proposed off-season trade for one of baseball's top free agents was vetoed by the player himself, and the fences in Safeco field were moved in to comfort right handed hitters more than any attempt to boost home run numbers. Optimism was tempered with seasoned realism, and many of the followers of the ballclub felt the offseason moves were nothing but an exercise in futility, that the team was rudderless--without direction, without purpose.

-On Saturday, July 13th, 2013, Tim Lincecum pitched a no hitter against the San Diego Padres, giving up 4 walks and needing 148 pitches, but surprising both Giants fans and experts who had given up on The Freak, suggesting that even if the day was part luck, he still had that something that would give him a chance to keep pitching in the major leagues, that another team just maybe could, and should, take a chance on him for what would turn out to be a great personnel decision. For one night, the conversation was no longer where Tim Lincecum would end up, or if he would ever start a baseball game again. He was in control for each of his 13 strikeouts, and every one of the postgame interviews featuring surprised sportscasters who wanted so badly to ask him something else, but instead said great job, Timmy. But it was just one game out of many, and the emotional release felt by both Lincecum and Giants fans who had long divorced themselves from any expectations of his improvement was just that--one day. One game. One start. It might look like progress to some. But it probably wasn't.

-On Saturday, July 13th, 2013, Felix Hernandez pitched 8 innings of a 6-0 shutout of the Los Angeles Angels, who fielded a lineup including some of the most feared hitters in all of baseball in Mike Trout and Albert Pujols. The 2013 Seattle Mariners have scored 44 runs off 71 hits in six days. They have also put out a lineup that looks quite a bit different from the club's 2012 iteration. Justin Smoak has lifted his wRC+ to 121, and is now hitting .261/.360/.407. Here are two of his at bats from tonight's game. 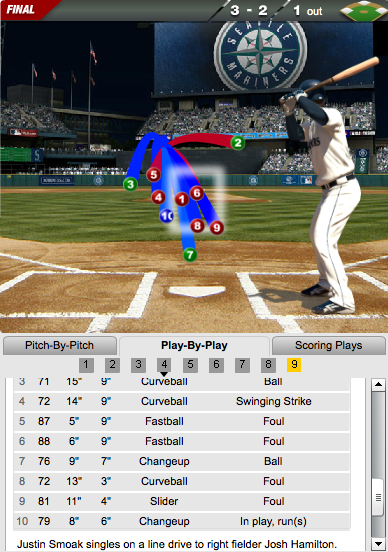 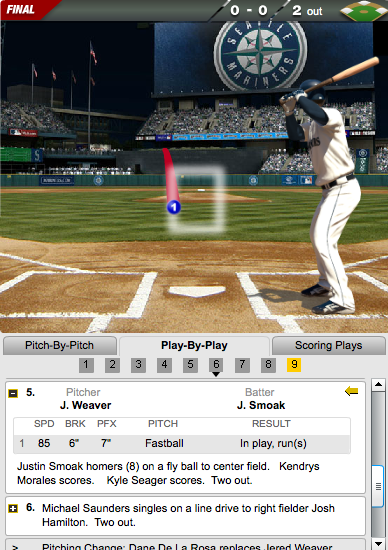 The first thing that came to this writer's mind when seeing this second at bat was This is almost the exact same pitch Smoak hit for a home run off of Bronson Arroyo in Cincinnati last week. Perhaps Justin Smoak really has that power we all thought he did. The first thing that came to mind when seeing the first at bat, which was a 10-pitch RBI single off of Angels' starter Jered Weaver in almost the exact same spot, was holy shit Justin Smoak is fixed for good.

A lot has been said on this website in recent days about Hope and Optimism and Hey Maybe Even Losses Are Okay, but today the Mariners put out probably the best pitcher in Baseball to face a team of hitters and he shut them out, giving up only 7 hits and striking out 4. And the offense showed up and gave him run support and notched 6 runs on the board. Not only did the Mariners win, but they rolled into SoDo in tanks, setting fire to the Angels' team bus and handing over the keys to Michael Saunders and Justin Smoak, who both had two hits after a few months that made many wonder if they even had places on the future of this team. Kyle Seager went 2-3 with a walk, extending his hitting streak to 16 games. Yoervis Medina took over for Felix Hernandez to close the game in relief, touching 95 to strike out Josh Hamilton and Mark Trumbo to secure the Mariners their second win in as many days and giving them a chance to sweep their first series in 2013. Tonight's game was just one game for the Mariners, but it was one game in a series of games that are starting to look somewhat similar: filled with professional at-bats, and run creation rather than crossed-fingers and closed-eyes swinging for the fences. It might look like progress to some. It probably is.

-When Tim Lincecum wakes up tomorrow, he will self-consciously turn on his television to hear what they are saying about him. It will feel good--if only for a moment--but in either a month or five, he could be signing a new contract for a different team, and inheriting a brand new set of expectations and struggles that will redefine his career. It is very possible that he has pitched his last playoff game for quite some time, and though tonight's no-hitter was absolutely a career night for the one time Giant's ace, it was ultimately a statistical anomaly. A great surprise, perhaps a going away party for a pitcher with an uncertain future and improbable job stability. Fun, but ultimately just one baseball game.

-When the Seattle Mariners wake up tomorrow they will play more baseball, and it probably isn't going to be as exciting as a no-hitter career night. But win or lose, they are in the middle of a much bigger narrative today--which for all we know could include a game just like Lincecum's. But it doesn't have to. It very well could be even more exciting than that.