The pitching finally got the whole "be good" vibe from the offense and the Mariners cruised to an easy 8-3 win over the Angels. 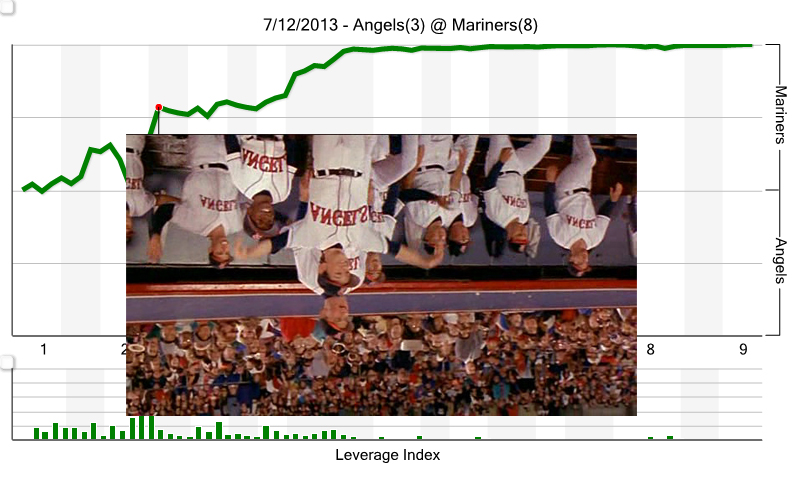 I apologize for the brevity of tonight's recap but there is child illness in my home and has been all week. Rather than try to offer a compelling narrative I'm simply going to provide a few observations. The Mariners provided their own narrative tonight. They beat the hell out of a team that's spent the last two offseasons spending like mad to win. For many reasons this method of assembling a winner is looked at with substantial cynicism by most fans. If you're the type that enjoys schadenfreude note that the Angels have numerous large, long term contracts to players already past their peak performance and that it is July 12th and their playoff odds currently stand at 11.5%.

The Mariners may or may not be building the foundation of a consistent contender but there is at least a decent chance that the Albert Pujols contract is going to become untenable right around the time the sports/cable TV bubble bursts, leaving them financially crippled and solely dependent upon the resources of draft and player development that most team's fans have to grapple with. That is an encouraging thought.

Questions for you this Friday:

1) The Mariners have scored 38 runs the last 5 games. Without research what approximate period would you guess was the last time the team score more runs over a similar stretch.

2) In the golden days of 2013 do you have enjoyable plans for this weekend? If so, what?

3) Best video game you've played in 2013? I cannot compare anything to The Last Of Us because it has shattered my conception of how well video games can tell a mainstream story.