Share All sharing options for: Figuring out Carter Capps

Something has been bothering me about Carter Capps. He's been bad this year, sure. There have been a lot of bad Mariners this season. But Capps seemed like a sure-thing out of the bullpen last year, and now he's anything but. Is it mental? Maybe. Is it a lack of confidence? Perhaps. Is it the lack of experience?

The 22-year-old flamethrower is still a bit green in that he's only logged 59 innings in his big league career. But the lack of experience doesn't mean a pitcher can't be lights out -- Cardinals right-hander Trevor Rosenthal has about 65 innings under his belt, and he's been fantastic.

If Capps wanted to work things out in the bigs, well -- word is that he was told to pack his bags.

So what is it about Seattle's baby-faced reliever? Is it the velocity? Are hitters catching up to his fastball?

Using data from Brooksbaseball.com, we can see that his overall velocity for all of his pitches is down. 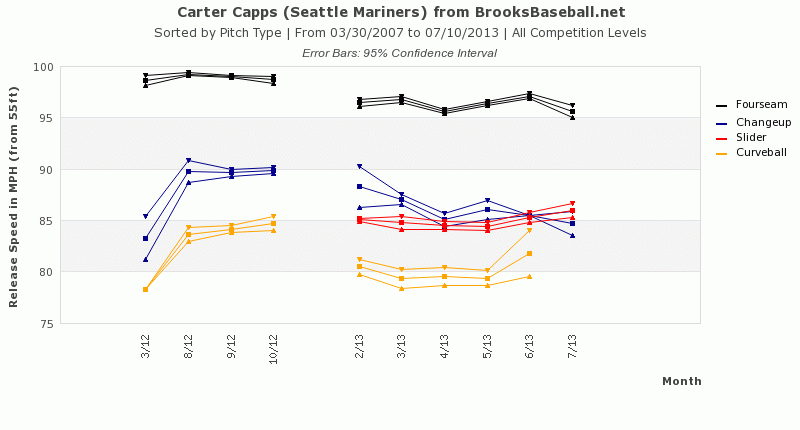 According to PITCHf/x, Capps' velocity is down to 95.4 mph from last season, when it was averaging 97.8 mph. When Capps broke into the bigs last year, he had a hard fastball thrown from an odd angle with movement. It was nasty. A 95 mph fastball is still nothing to scoff at, but if Capps' diminished velocity is representative of his repertoire going forward, he needs to hit his spots to avoid getting hit around.

Usage of his fastball is down, as Capps started throwing a slider this year. 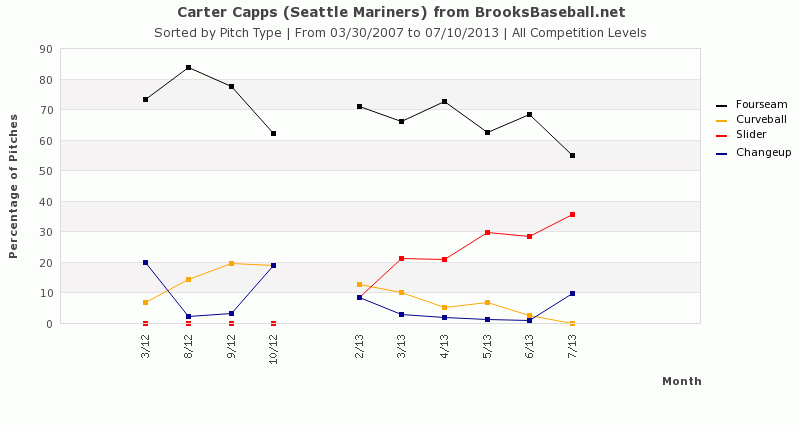 Before I dug into the numbers, I wanted to see if there was anything we could see visually that might give a clue as to why Capps' velocity is down.

Most everything is the same. He still has quick glove separation, his hand grazes his butt before he throws, and his arm angle is relatively the same.

The one difference I notice between the two deliveries is that Capps' landing foot is closer towards first base this season than it was last year. Because of this, it's possible that Capps isn't generating as much torque. Not so much because he isn't doing it, but because his timing is off from where it was before. We know that velocity is contingent on the mechanics of the lower body, and it could just be something that is causing Capps to be just enough out of sync for his velocity to drop.

So this brings me back to my original question. Are hitters catching up to his fastball? Has Capps been more hittable now than in the past?

Generally, you're better off with pitchers that have a high groundball rate, as the chances of groundballs converting to extra bases are much less than flyballs. In this instance, Capps' numbers aren't trending the way they should. His groundball rate is down while his flyball rate is up.

The easy answer is that Capps was bit by the home run bug. He didn't give up a single dinger in 2012 -- he's given up nine so far this year.

But here's the interesting thing: His swinging strike rate is 13.2% this season, up from 11.9%. His Zone-Contact rate is down to 75.4% this year, from 85.0% in 2012. His velocity may be down, but at the micro level, hitters are having a tougher time making solid contact.

All this is taken from a very small sample size. This could be Capps regressing, or this could simply be a budding star paying his dues. We don't really know what Capps will become. We've seen flashes of pure brilliance. We know he has the ceiling to be a high-leverage type reliever.

Something's been bothering me about Carter Capps. It could be a handful of things. It could be his velocity, the poor results, or maybe it's all in his head. I know he can be a sure thing out of the bullpen. He can be, we've seen the potential. I just wish he knew that too.