An onslaught of Boston hits for the 2nd straight day hold the Mariners comfortably within known waters.

Share All sharing options for: 40-51: Mariners are not as good as the Red Sox 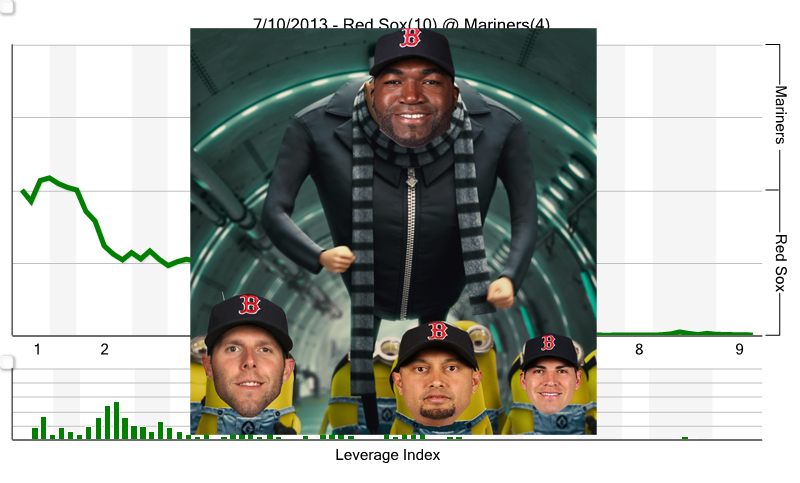 One of the byproducts of a team featuring as many young players as the Mariners is how easy it is to find something positive. The team just got a full on Brandon Knight experience and yet a cursory glance at the night's happenings and I can convince myself to feeling good about Brad Miller continuing to get on base at a regular clip, Dustin Ackley and Justin Smoak drilling doubles or even Michael Saunders getting an extra base hit for the 3rd straight game. Even in an obliteration like tonight's the power of youth's rays pierces some mighty dark clouds.

Old players are oftentimes a bore because their abilities and narratives are already known (note: Raul Ibanez is the exception that proves this rule), but young players are fun because they drop you into the beginning of something. It could be a fairy tale. It could be The Road. Hopefully it's good because there are few things more thrilling than realizing you've got a great story on your hands, checking the book's spine and seeing hundreds of pages still to read. At least these Mariners are at the beginning of something. The story's a bit uneven but all my favorite characters have strong redemptive qualities. It's enough to keep me attached.

Questions for you because tonight's game did not produce enough of them:

1) Growing up who was your favorite baseball player who wasn't a star?
2) You have to choose for the rest of your life between consuming stories through either one-shot motion picture or seasons of episodic television. Which do you choose and why?
3) Are you enjoying this long, early onset stretch of Summer or do you find the relative heat to be tiresome and long for the chilly embrace of Fall?
4) What admittedly awful music do you enjoy?