An early offensive show wasn't enough to hold off the Red Sox, as the Mariners fall back to 10 games under .500 in an 11-8 loss. 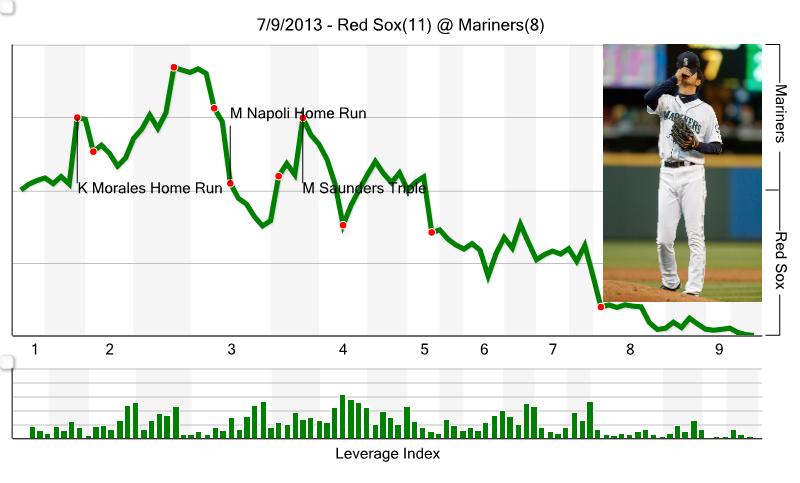 Hopefully Never on This Half of the WPA List Again: Hisashi Iwakuma (-.533 WPA)

Well, tonight was far from the bombshell 3rd consecutive win that last night's game inspired us to believe in, but it was far from the kind of loss that we have been accustomed to this year. Yesterday, the Mariners took the Red Sox by the leash and dragged them across the Safeco infield, face first in the dirt. We've seen that game before. But ultimately, that game last year didn't really matter for a) the progress of the rest of the 2012 season, b) the outlook on the roster construction for the future of the ballclub, or c) the future hope of the 2014-2015 Seattle Mariners. And that's what was different about last night.

It is also what was different about tonight as well. The Mariners lost to the Boston Red Sox, but the Mariners lost looking like a baseball team that actually knows how to swing a baseball bat, despite some bummer pitching for, oh, I don't know, almost the entire game. Hisashi Iwakuma had a bit of a meltdown, forcing Eric Wedge to pull him in the 4th inning. A lot of us feared regression was coming for the pitcher who was leading the AL in ERA and WHIP before tonight's game, and although the past couple of games saw a few untimely home runs, tonight wasn't exactly how we expected him to fall. Especially if you bought one of those Game of Throws T-shirts.

I just love timely promotions from the Mariners. Last year, they gave out Dustin Ackley bobbleheads on one of the first days Wedge sat Ackley for the season. This year, the Mariners famously announced "beard hat night" at the beginning of the season, shortly after a certain bearded fan-favorite was traded to the Oakland Athletics. Tonight by no means broke Hisashi Iwakuma, but I bet a lot of people wearing one of those shirts home tonight will remember this game every time they see it in their dresser. Oops.

But ultimately, tonight wasn't a usual Mariners Are You Kidding Me? loss. It felt like an Oh, well, bummer! kind of game. Sometimes when I search for an image to paste over the chart above, I try and think of what single word or phrase best represents the experience of the baseball game that just happened. Sometimes I type "Not again," or "Wheels fall off." Sometimes it feels like a "Flaming pile of human corpses" kind of night. Tonight was a "Well, Shoot!" search. I can't think of the last time I felt that way.

Now I know this may be overly optimistic. Perhaps last night's euphoria is still wearing off on me. But when the Mariners score 8 in a 13 hit game, it's tough to contextualize the night as a typical Mariners game. Pitching was a bit of a mess, though. After Iwakuma was pulled, Blake Beavan found himself in the long relief role tonight, getting off to a rough start before settling in to the 4th and 5th innings. Charlie Furbush and Danny Farquar saw a bit of time and gave up a few baserunners. Carter Capps had a rough night, walking Jarrod Saltalamacchia before back-to-back RBI singles from Jose Iglesias and Brock Holt. I almost wonder if he gets sent down on Thursday when oh, whoever it is gets called up from Tacoma. But I never at one point wanted to turn off my television the way I have in the past. It felt at least possible the Mariners could do something for almost the entire game.

And the Red Sox pitchers had a messy game as well. Starter Allen Webster was pulled in the 3rd inning, putting gobs of Mariners on base and giving up back-to-back homers from Kendrys Morales, and the young guys were producing. Progress! Direction! The first half of this game was so much fun to watch. The second half of this game was like that strange lower half of the wine bottle, when you realize that you haven't been listening to half the words the other person at the table was just spouting out at you for the last ten minutes, but you're pretty sure you got the gist of what they were saying. It kind of just happened, and yeah, you blew it, but nobody seemed really too upset about it.

The good news is that tomorrow they get to do this over again, and it's not like the Mariners got shut out or one-hit. While last night's eager optimism will be, and probably should have been, tempered, there are still things to be excited about going forward, even if there are more games like tonight going forward than anything else:

1. What are your goals for the rest of the season? .500? Finish ahead of the Angels? Check out the new guys?

2. Who gets the next bobblehead promotion?

3. I've been binging on The Newsroom on on demand to prepare for Season 2 coming up. For those of you with the time, what has been a good streaming marathon show you have been into recently?