Because it's not yet time to bury this team but that's what I feel like doing. 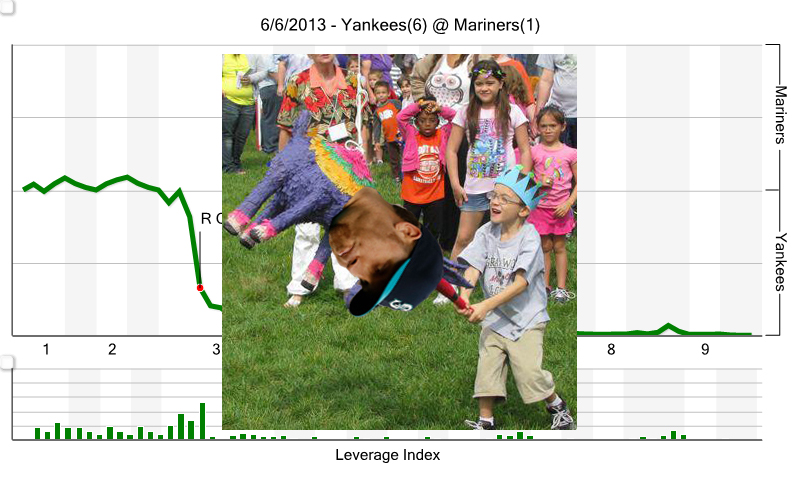 I'm condensing the chart and recap into one post tonight because A) the team allowed me to work ahead by having a Win Expectancy <4% by the end of 2 1/2 innings and B) the fickle nature of my 2 year old's sleeping patterns. I would apologize for this but I've been told that it's a bad habit to apologize when you feel like you're writing below your own standards as it lowers you in the reader's eyes. So I most certainly will not apologize.

I don't really have too much to say about this game. Between the draft and the Dementor-like experience of yesterday's game the last 24 hours have been full of things that weren't an utterly forgettable loss to the Yankees. I will just say the 3-5 spots in the rotation for the Seattle Mariners are the result of a fundamental breakdown by the front office. Without being present for the discussion it's impossible to know what the ideal scenario was here. Was Blake Beavan really going to be the #5 starter all year? Was "23" year old Erasmo Ramirez expected to pitch 200 innings? Were they counting on Brandon Maurer to be a phenom? The team has been forced to pull Aaron Harang off the scrap heap within the first two weeks of the season and, despite decent peripherals he can't stop give up flippin' ding dongers and as such his results have sucked. The stretch of I-5 needs to be repaired due mainly to being worn down by the Mariners shuffling through emergency starters and long relievers. It's pathetic and embarrassing, mostly because this was an issue everyone saw coming well before the season.

The front office recognized an imbalance in the roster with a surplus of pitching depth and not enough offense. However the trades of Brandon Morrow/Doug Fister/Jason Vargas have netted the sum total of a 30 years old free agent to be in Kendrys Morales. That failure to develop talent and then fill the gaps created by these trades are, in my view the most damning case for the Fire Z contingent. What was a strength is now not and there's nothing to show for it. Also, Shawn Kelley:(

In his second trip back to Safeco as a Yankee did the sight of Ichiro as an opposing player still register as something out of a parallel universe or have you moved on?

Is there a place on this earth where you can be and instantly feel a sense of calm and serenity despite whatever chaos may be raging inside you?

Not knowing the Eastern half of our state particularly well what are some can't miss experiences out there that don't involve wineries/breweries?

100 Years of Solitude. Best Marquez novel. (note: not a question.)