The Seattle Mariners have selected 3B/1B DJ Peterson in the 1st round of the 2013 MLB Draft.

The Mariners have selected DJ Peterson with the 12th pick in the 2013 MLB draft. Peterson is described as a pure hitter that is one of, if not the best hitter in this year's draft. He's right handed, attends the University of New Mexico, and currently plays 3rd base. There's some question about his ability to stick there, so he's listed at a 3B/1B.

Peterson was featured prominently on the MLB Network after he was selected, and had a nice moment as he was drafted, surrounded by family. When MLB Network spoke to him, he spoke of his improved footwork, plate discipline, and overall maturity as improvements he's made since HS, when the Mariners originally drafted him in the 33rd round. 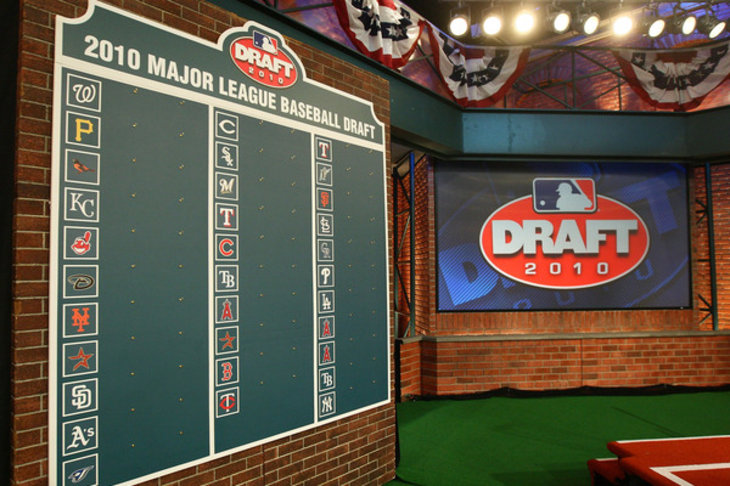 D.J. Peterson may be the best pure hitter playing college baseball. There are concerns about his glove, however.

I'm not a scout. Everything I know about college and prep players is learned from the opinions of people that have access, the ability to see these players play every day. That's all most of us have, yet we all have strong opinions. We want to sound off, even if the opinion we've formulated is on the opinion of somebody else, who in part based their opinion on another opinion on what the right way to evaluate a player is. Jeff wrote about this today in a very wonderful manner, so please read that. So instead of trying to pretend like I'm a scout or somebody who has unique insight, I'm going to pass along what those more knowledgeable are saying about DJ Peterson.

#Mariners looking for their next Edgar Martinez? D.J. Peterson is in that mold, I think, offensively. I think it's a can't-miss bat.

Just talked to an opposing pitching coach about D.J. Peterson. "I just don't know how you pitch to him. He hits everything." #mlbdraft

Conor's also running first round pick analysis over at Baseball America, and here's what they have to say about this pick.

SCOUTING REPORT: The Mariners drafted Peterson in the 33rd round out of high school in 2010, and he turned down a six-figure offer to head to New Mexico. That decision will pay off this summer, as Peterson figures to go in the top half of the first round as one of the class’ best all-around bats. Scouts gush about his hitting ability. He has short, hitter’s arms, tremendous bat speed and strength, and always hits the ball on the screws. His hitting mechanics are sound, with quick, strong hands, and he shows the ability to make adjustments on the fly. He has keen pitch recognition skills and already has a pro approach to his at-bats. While New Mexico plays at an elevation higher than Coors Field, scouts say Peterson’s power is legitimate. That’s good because defense will never be a big part of his game. He is a below-average runner with an above-average arm. He moves well for his 6-foot-1, 205-pound frame and should get a chance to stick at third base, but he’ll likely wind up in left field or first base. Peterson’s bat should allow him to move quickly.

WHERE HE FITS: Peterson’s bat is special. One scout this spring said it’s the best swing he’s seen in 25 years of coaching and scouting. The Mariners system is loaded, but Peterson is easily in the top four prospects for Seattle and has Paul Konerko upside.

Here's what Jon Sickels has to say at Minor League Ball:

1-12) Mariners: D.J. Peterson, 3B-1B, University of New Mexico: Another right-handed college power hitter, Peterson controls the strike zone well and has excellent power to all fields. His 6-1, 205 pound body lacks speed and he may have to switch positions, but his bat is expected to take him through the minors quickly. His college home park favors offense, but there's little doubt that his hitting skills are real. He batted .408/.520/.807 this spring with 18 homers, 46 walks, and 35 strikeouts in 218 at-bats.

It's anybody's guess how Peterson will pan out, but the scouting reports about his bat don't mess around. Whether he sticks at 3B or moves to 1B, good bats are welcomed anywhere. Welcome to Seattle, DJ.

You can follow/congratulate/welcome DJ on Twitter here, if that's your thing.

Next Up In Seattle Mariners Draft