Kyle Seager hits a miracle grand slam to tie the game in the 14th, but the Mariners can't come back twice, losing to the Chicago White Sox 7-5. 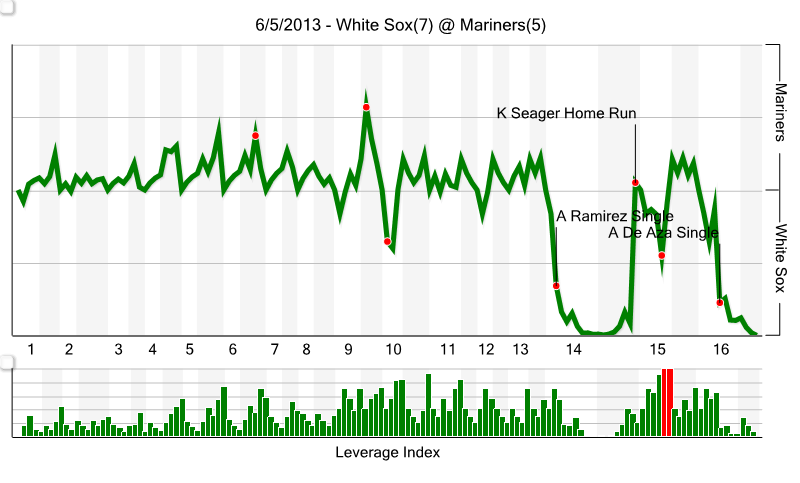 Just when you think baseball can't get any weirder, it does, even if the final result is inevitably the same. The Mariners lost another close one 7-5 to the Chicago White Sox today, despite a ridiculous 14th inning comeback. After the M's managed to go 13 scoreless innings, the White Sox finally dropped 5 on the board, and the M's were set to lose another game they easily could have won.

Then Kyle Seager happened. His homer was the first time a grand slam has ever tied the game in extra innings, and no team had ever put up more than 5 runs each in an extra innings game that went past the 9th scoreless.

Kyle Seager came up looking to tie the game, and succeeded. His huge rip at Addison Reed's first pitch showed his intent - and he still got a pitch to crush. Watching Mariners baseball is usually a passive affair, but I let a scream rip out when he crushed that ball.

This game lasted well over five hours. The Mariners pissed away chance after chance to score, and grounded into 6 double plays while doing so. Iwakuma was brilliant, but Wedge still pulled him after 99 pitches - you have to wonder how big of an issue that blister still is, and if he can keep it forever because it's doing wonderful things.

Every season has a game that sticks out, even if it's one the Mariners lose. Actually, those are the ones that usually stick out the most. I remember Rick White walking home Kenny Lofton more than I remember any other game that season. I remember Brandon League's Cleveland meltdowns. I 'm not sure which walk-off I'll remember most this year, but those aren't likely to leave the mind soon either. The Mariners had a chance to make one of those games a bad memory for Chicago, and couldn't do it. But unlike the others, this one will be remembered with fondness. I don't care that Hector Noesi lost this game. I knew he was going to, and the Mariners had more than enough chances.

There's 162 games, and the Mariners happen to play another one tomorrow. But this memory of Kyle Seager doing the impossible isn't going to die any time soon. Let the legend continue. Kyle Seager is a stud.

1) How loud did you scream when Kyle Seager hit the grand slam?

2) How much did the length of this game screw with your schedule today? Did you get caught in traffic, or miss something because you hung around?