Someone excavated Dan Wilson's cursed catching equipment from storage and now all Mariners catchers are getting picked off in mysterious and entertaining ways. Today's new victim: Brandon Bantz.

We've reached the point in the season where the 40-man roster transactions are every bit as entertaining as the boxscores, so for those scoring at home: Bantz from Tacoma to Seattle and the 40-man, Triunfel from Seattle to Tacoma, Gutierrez from the 40-man to the first layer of hell, Limbo, where he gets to play checkers against Caesar and Vercingetorix. 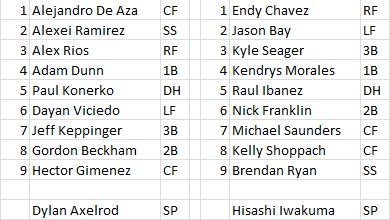 The alliteration is even stronger than before for the White Sox, but what's notable is how amzingly mediocre the non-A section of the White Sox lineup is. Jeff Keppinger is far less interesting now that he has two walks on the season (in 194 PAs, for a staggering 1% walk rate), and he went from useful part-timer to wretched starter in a real hurry. Gordon Beckham has been allowed to play 544 games in the majors, which should provide comfort for those of you who have lost patience with Justin Smoak. Dayan Viciedo has decided to become a slight carciature of his previous self. Hector Gimenez is the lesser Gimenez.