Kendrys Morales and Musings on Being Clutch

Share All sharing options for: Kendrys Morales and Musings on Being Clutch

Discussing the idea of clutch is tricky business. Many words have been written about the legitimacy of the concept as a skill, and few players have shown the ability to sustain it over their careers. It fits better as a narrative than an actual skill, and is often the result of a go-ahead hit in a high profile game as opposed to a fair look at all important at bats over the course of a career. Really, all it takes is one. David Freese. David Ortiz. Derek Jeter. These are players who had big time hits in big time games, and get the tag for life. Good hitters are also unjustly slapped with the clutch tag because they're simply good hitters. Good hitters get a lot of hits. In order to be clutch, you have to demonstrate you are markedly better in high leverage situations. It goes beyond hitting with RISP, as getting on base in a key situation is just as important as the hit that drives the run in, etc. Using the Fangraphs clutch metric that measures how well a player performs in high leverage at bats, Derek Jeter has a career rating of +1.16, though many fans would call him one of the most clutch players of all time.

The leader for the clutch metric over the last 10 seasons is Willie Bloomquist. Brendan Ryan is 24th. These aren't the first players you think of when you start to define clutch.

While WPA (Win Probability Added) is dominated by high performing hitters (Chris Davis and Josh Donaldson lead it), the clutch metric is a far more mixed bag. Here's the 2013 leaderboard.

While we've learned that clutch is generally an unsustainable trait for most (Nate Silver did great research on this in 2006's Baseball Between the Numbers), Kendrys Morales has been remarkably effective over the past five seasons, despite being injury plagued.

Morales ranks 8th over the last 5 seasons, and Franklin Gutierrez also shows up at #10. We're dealing with arbitrary end points here, and while I chose 2009 as the start time for Kendrys Morales, his clutch rating was -0.73 over his first 3 seasons. You could argue that Morales wasn't really the hitter he is today until 2009, and while I would tend to agree, it's clear there is some variation here. That being said, Morales hasn't looked back since his 2009 season, and has been a noticeably better hitter in his most important at-bats.

Will he sustain it over his career? That's speculation at this point, but a five year positive track record is encouraging. Bobby Abreu was an unremarkable clutch hitter over the first 6 years of his career (+0.38) but from 2002 to 2012, he was the 4th most clutch hitter in baseball (+5.01). The number one clutch hitter during that span was Randy Winn, by the way.

Hypothesis: The best clutch hitters develop this trait as opposed to always having it. Let's look at the 2009-2013 leaderboard to see if there are trends of developing a clutch attribute.

Bobby Abreu, Willie Bloomquist, and Asdrubal Cabrera demonstrated some clutch ability before this current five year sample. Cabrera's was really just one year, and Abreu was fairly neutral in his first 6 seasons (1996-2002). That just leaves Willie Bloomquist, master of clutch and middle finger to my hypothesis. There seems to be at least somewhat of a trend of the best clutch hitters not having that ability at the beginning of their careers. For some, the learning curve is faster (Votto) and for others it's much slower (Abreu). Is this a learned ability to hit better in situational situations for only some players, or is this a league-wide trend with age?

Using the past 10 seasons, I inspected the clutch rating for the following age groups across the entire league.

There is somewhat of an expected trend with WPA, as it is closely tied to skill and overall performance. The leaders for WPA in this 2004-2013 sample are Albert Pujols, Miguel Cabrera, Lance Berkman, Prince Fielder, etc. The full leaderboard is here. When placed to the whole league, WPA is highest in a hitter's prime years, and lowest in the youngest. Even though many weaker players drop out of the league before their 30s, WPA still takes a tumble to the negative.

Clutch isn't tied to overall performance, and there's really no correlation here as expected. A scatter chart for each individual age from 2004-2013 combined doesn't show any league-wide trend. 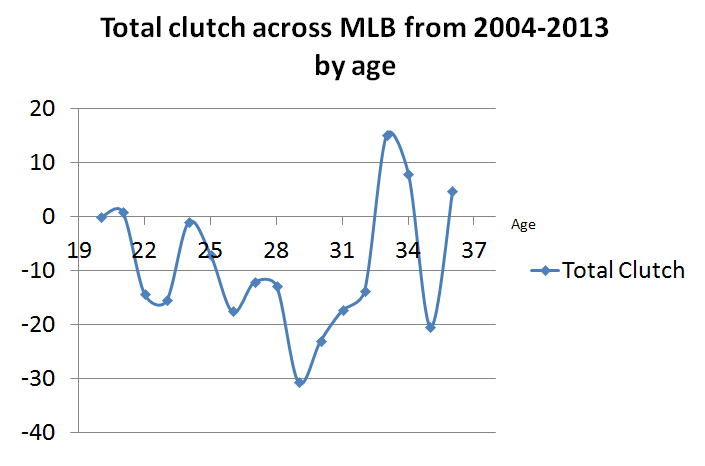 So do only certain hitters develop better situational hitting skills as they progress in their career? It's certainly possible, and while the current 5 year leaderboard hints it could be, further research would be required of those that do it best for a period of time, as that sample simply isn't large enough to make a conclusion, but it's interesting nonetheless. The process of identifying trends while quantifying clutch remains as murky as ever.

Sometimes you do a lot of research, make a lot of tables, and don't come to any definitive conclusion at all. That's ok, because you learn in the process - there's always value in checking or confirming what you suspect may already be true. In any case, Kendrys Morales has been able to sustain his excellent hitting in high leverage at bats since he broke out in 2009, and it's only been more of the same in 2013. He'll be an interesting player to follow over his career to see if he is one of the rare ones that makes a career out of hitting better in important situations.