The Mariners win in extras behind Zunino, Franklin, and Jason Bay. Brad Miller looks like the MLB logo.

Share All sharing options for: 35-45: Miller Time Kicked Off With Walk-Off

Today was a strange day.

It was hot as all else in Portland, and while I can't say I know what the weather was like up in Seattle, a quick Google search tells me it was a nice 87° which I guess means that it's actually summertime. The NBA Draft was last night, and with the end of the NHL's Stanley Cup Finals on Monday, we are entering the official baseball-only-shorts-wearing-drink-beers-at-noon-at-Safeco time of the year that I love so, so much.

I'm sure the Mariners' PR team planned to have your emotional experience of entering this phase of the year be associated with a late-night fireworks show at the ballpark, as you look down at your ticket-stub and think Yes, this was a wise investment, for even if the BaseBall Club of Seattle LP® lost the game, my experience of this sporting event was a wise choice. I will again choose to partake in such cultural events around this city and perhaps indulge in a fine beverage and dining experience from the bountiful options around the ballpark next visit. Say, look at this! Throwback night! What an exciting idea, I will make sure to save the date on my calendar.

Hm. But you can't really blame them. Can you imagine what they do for a living, trying to sell tickets and increase brand loyalty for a team like the Seattle Mariners? That shit has got to be hard. Its no wonder they are giving us John Jaso beard hats, Justin Smoak trains, and firework nights as incentive to come out for an evening of sports at Safeco. If the on-field product doesn't produce attendance numbers, and they don't have control over fixing that...um...let's get creative!

This afternoon, the Mariners pulled the Screw-It trigger, calling up hot-hitting SS Brad Miller from AAA Tacoma, bringing the average age of the infield of the future to a whopping 23.6. Dustin Ackley also started in his first game back from Tacoma as an adapted outfielder, and with Hisashi Iwakuma on the mound, I sat in front of my television realizing that I could care less who wins this game. I was looking at the future of my favorite baseball team, and at the risk of having another 2010 and watching yet another set of prospects dissipate into the ether, I was excited, and I think a lot of us here and around the Mariners blogosphere were excited as well.

Tonight had a "new" feel to it that felt fresh and exciting. I want to keep watching Nick Franklin hit doubles. I want to make sure I see Brad Miller's first hit as it happens. Erasmo Ramirez might be up soon, and if Taijuan Walker makes a late-September appearance, I want to watch the hell out of that game too. I might prefer if it takes place next April, but my point remains. I'm no longer watching these Mariners to hope for the second wild card, or a season above .500. I'm forgetting that this is the second time this has all happened, and watching an influx of young players that will one day carry this team run some games into the ground and hit some first home runs and I don't even care if they lose. It's the most excited I've been all season. THAT is how you get started on the path to selling tickets for baseball games.

And to cap it all off, the Mariners won tonight's game with an exciting late-inning walk-off from Mike Zunino. Nick Franklin hit two doubles, and Brad Miller stole his first base after looking like he actually belongs next to the plate. Dustin Ackley's offensive struggles continued (although he was facing pitchers who have been holding LHH below .200), but the Ackley In The Outfield experiment has begun, and the curtains have been pulled back with this first little gem: 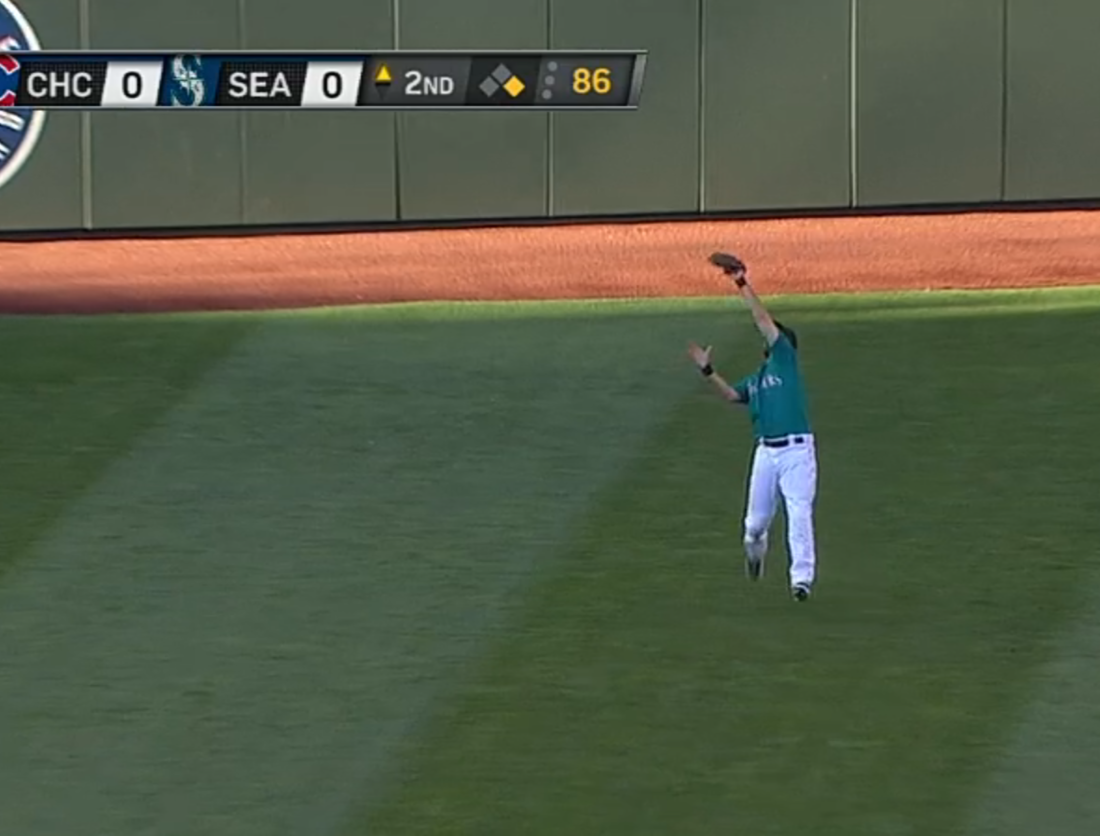 I don't know how to make .gifs yet, so I'm hoping someone makes one of this, because it was kind of hilarious. I mean, he caught the ball, so you can't really laugh, but he caught it behind his head while jumping backwards after exhibiting a look that said shitshitshitshitshitshitshitshit oh thank god. wait, shit.

We had a conversation in the game thread about how Dustin Ackley always has the exact same drab, monotone look while up at the plate. Well it appeared his thin facade cracked while playing in the outfield tonight, and it seems the guy actually is capable of emotions beyond being a candidate for one of those joke shirts that list fear/happiness/joy/sorrow under the same 15 pictures of Darth Vader.

Hisashi Iwakuma got into trouble early in the game, first giving up a single to Alfonso Soriano, then watching a bizarre series of events unfold after Ryan Sweeny hit a triple down the right field wall, and advanced all the way to home when Nick Franklin threw the ball into the Cubs' dugout. It was not fun to watch, and it was only the second inning.

And although Jason Bay put the M's on the board in the 5th with a 1-0 fastball he delivered into the Mariners' bullpen, the Cubs answered in the 7th, jumping on two first-pitch mistakes from Iwakuma that have been following him a bit in his last two starts. First, Alfonso Soriano clobbered an 82 MPH slider right over the center of the plate. Two batters later, Cubs catcher Dioner Navarro sent a 90 MPH fastball into the Safeco bleachers. It was a bit unsettling, and all I could remember was Kuma's last start when he gave up 3 home runs to Oakland and I thought this amazing start to his season was finally going to drift off the rails like everything nice we ever get on this team.

Kuma has given up 5 home runs in his past two starts. He's given up 10 over all of his other 15 games. Even if the recent home runs are something to worry about (and I'm not really sure they are), he's still stranding runners with ridiculous efficiency, leaving 84% of all baserunners on their bags at the end of his innings. That's better than Felix. That's better than Yu Darvish, Clayton Kershaw, Matt Harvey, and now 12-0 Detroit Tigers movie-waiting-to-happen Max Scherzer. And we have him on contract for potentially two more years. I've been a little scared these past two starts, but sometimes I've been too quick to forget that Hisashi Iwakuma is a goddamn pitching machine. And he's ours. I'm pretty excited about that.

Tomorrow the Mariners don throwback uniforms, honoring a short-lived Northwestern League Seattle Turks team from 1909. I've seen the "first inning" of Ken Burns' Baseball about nine hundred times (and innings 4-10 only twice each), read The Glory of Their Times more than I probably should have, and my Twitter avatar is of Rube Waddell- an alcoholic hall-of-fame pitcher that probably had severe cognitive struggles, and would supposedly leave games mid-inning to chase passing firetrucks. Someone in the Seattle Mariners' PR department gets me. I already bought my white-on-blue Turks throwback hat, and I can't wait to see how Brad Miller looks, sans-batting gloves with his stirrups up to his knees. Even if I didn't like the Mariners, and was in town, I'd probably stop by to catch a glimpse of tomorrow's game.

And I...well...negated this entire post with this last paragraph.

Anyway. Aaron Harang takes the hill for an early game tomorrow at 4:15 PM. I don't have the right kind of words to talk about Aaron Harang before Aaron Harang happens anymore, so I'll just stop here and see you all tomorrow night.