The Cubs come into town, and the Mariners infield of the future makes its debut.

It's always interesting when the Cubs come to town, being one of those franchises that has a fanbase that stretches to all corners of the country. As far as going to Safeco when opposing fans invade, I will happily take the Cubs fans over the Yankees or Red Sox variety, as the Cubs fans generally seem like a pleasant bunch. I will say that nothing was better than the drunk Toronto fans last year when the Blue Jays came to town.

This week the Mariners promoted Brad Miller and recalled Dustin Ackley, and we haven't seen either yet. This series is going to be fun to watch for those two alone to see what kind of damage they can do. It will be especially interesting to see where the Mariners stick Dustin Ackley, given that Miller and Franklin are now practical locks in the middle of the infield. That leaves the outfield as Ackley's remaining option, where we noted he's only played a handful of times over the last seven years, including just 12 games in AAA. Given Wedge's comments about easing him into to Safeco's outfield, one would think his first action could come in left, where Ibanez has been tromping around. That would bump the red-hot Ibanez to DH, Morales to 1st, and Smoak is the casualty. Not ideal for an every day scenario. Or, the team could throw Ackley right into the fire and stick him in center.

Putting Ackley in CF or RF is what I'd do at this point. As the Mariners enter the second half of the season, they're starting another clear evaluation phase, especially with young retreads like Ackley and Smoak. Endy Chavez should not be taking at-bats away from Ackley, and with Morse out, this is the time to cut his playing time. Some of this mess will be cleared up after the trade deadline, but it would seem crazy to call Ackley up and then strap his playing time just because he doesn't have enough experience in the outfield. If Miller/Franklin are the future and ideal middle of the infield, then Ackley is going to end up in the outfield anyways, so give him time to learn now in a season that's already fading quickly. The Mariners are going to wish Ackley had that outfield experience later if they don't stick him there now, and it's better that they see how his arm is going to play in those spots sooner than later.

Who would have thought in April that this team would be starting Miller, Franklin, Ackley, and Zunino all at once in June? The second youth movement has been accelerated to a blistering pace. However this group does, the Mariners are going to be considerably more fun to watch in the second half. 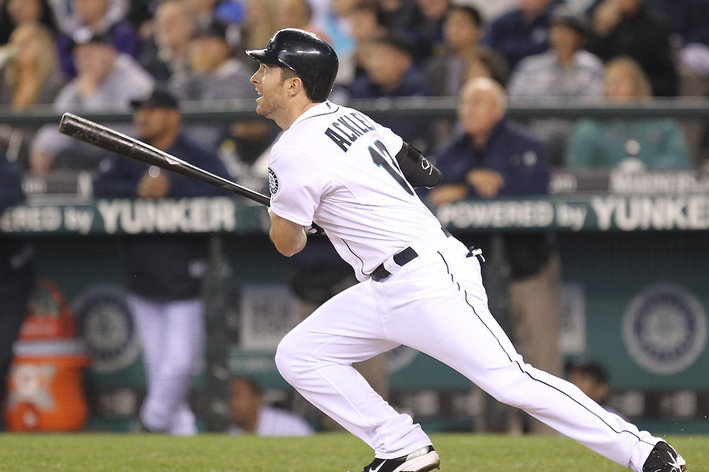 Dustin Ackley has been recalled, where will he play?

Tonight's game is against Travis Wood, who like Jeff Locke the series before, is having himself quite an odd year. Wood is running a league best .222 BABIP, despite a fairly average defense behind him. Despite the low BABIP, Wood's FIP (3.52) and tERA (3.96) are favorable, and his LOB% isn't particularly high.

Just over a month ago, our own Michael Barr looked into Wood's success to date at Rotographs, and attributed a lot of his success to throwing more sliders. Since then, Wood has continued to throw more sliders and cutters, and his cutter pitch value is all the way up to a wCT of 14, the game's highest cutter pitch value. Wood's been murder against lefties (.214 wOBA against), so it'll be interesting to see if Wedge decides to hold out Miller and Ackley for just one more game.

Some tight end from Notre Dame and Edwin Jackson round out the weekend for the Cubs. Jackson's been absolutely awful from a results based standpoint, but his peripherals are mixed -- his 3.87 xFIP is fine, but his tERA (using batted ball profiles) is much higher, at 4.57. His LOB% is an absurdly terrible 58.9%, and his BABIP is .340. There's some bad luck at play here, as his fly ball% is a career low 27% while his ground balls are way up. Jackson, like Wood, has started throwing a cutter more often this season, not that it's done much good for him.