Going the Distance for Seattle: Can Mike Zunino Deliver as M's Top Receiver?

Brought up to the Majors and handed Seattle's No. 1 catcher's role less than a year after ending his amateur playing career, is it realistic for the Mariners and their fans expect Mike Zunino to succeed?

Share All sharing options for: Going the Distance for Seattle: Can Mike Zunino Deliver as M's Top Receiver?

Given only 265 plate appearances in the upper minors, many around baseball saw the promotion of Mike Zunino to the big leagues as a rush job by the Seattle Mariners. The stats say he wasn't 'dominating his level', a mantra that has become very familiar under the M's Director of Player Development Chris Gwynn. In fact he was hitting just .238 in the Pacific Coast League, the 12th lowest average in a hitter-friendly league that is batting .273 on the season on whole. Despite that fact, the club still deemed Zunino not only ready for the move to the big leagues, but ready to become the club's full-time No. 1 catcher.

Zunino has started nine of Seattle's 13 games since his recall and he's hitting .212/.257/.333 in 35 plate appearances so far, good enough for exactly the same OPS (.590) that exiled, and now injured, former-catcher Jesus Montero put up this season. Of course Zunino is 16 months younger than Montero and actually is thought of as a solid-average defensive catcher so the two are not the same, but the fact remains that the early returns on the bat seem to match up with those original assessments. Rush job.

But hold that thought.

Zunino has shown some promising signs at the plate, hitting a home run in just his second game at the Major League level and getting fooled much less frequently by offspeed pitches than the Worst Case Scenario crowd had predicted. He did strike out three times in one game, but that was the game where Joe Blanton collectively lured the M's hitters to sleep by taking 8 1/2 minutes in between each pitch.

Oh, and in that game, Zunino also did this against Blanton:

As you can see, on a 91 mile-per-hour, 3-and-2 fastball just above the knees on the outside corner of the plate, Zunino punished a line drive the opposite way for a ringing double. The kid has skills. Here is the complete pitch sequence from that at bat. 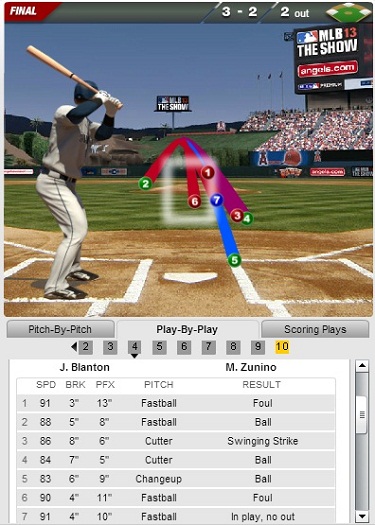 This is just one at bat, I acknowledge. But this kind of plate appearance and end result are not unique to this one instance in 2013 for Zunino. As I commented in the thread when he was promoted, Zunino was having very good at bats like this over his final three weeks in Tacoma, and pitchers had actually begun to readjust and move away from the all off-speed pitches and/or fastballs up out of the zone approach and had started to pitch him like, appropriately enough, a complete hitter.

Zunino definitely still has some growth to go through as a hitter and as a catcher, but the almost unanimous notion that he was promoted to the big leagues prematurely may have itself been premature. He is handling the pitching staff well, he is handling the defensive responsibilities of catching well and he is handling hitting big league pitching...adequately. And better than adequately at times. Having listened to Zunino's interactions with the media and having had the chance to interview him and speak with him myself, his maturity and focus stand out. The son of a long time scout, as everyone surely knows, he takes this seriously. He's also humble and honest about his weaknesses when he talks about his game. But it is also very clear that he is confident and that he believes in himself as a big league player.

For a 22-year-old just one year removed from swinging an aluminum bat and playing four games a week, Zunino has adjusted and adapted remarkably fast to the challenges of the professional game. The Mariners showed a lot of belief in him by promoting him and cutting ties with Kelly Shoppach, who had become the club's de facto starter when Montero was demoted. They clearly believe that Mike is ready to step into that role as the No. 1 catcher. And Zunino himself believes that he is, too.

Mike Zunino is Seattle's catcher now. As he matures and gets his feet wet as a pro in the big leagues there will certainly be ups and downs, but Zunino has the tools, the make-up and the confidence to succeed and deliver in that role.