The Mariners make Mariners of the A's in extra innings off a Kendrys Morales walk-off bomb, 6-3.

The Mariners continued their 239-game streak of simultaneously exciting and disappointing baseball fans today, with a 6-3 win over the Oakland Athletics that saw recently-recalled Franklin Gutierrez once again get pulled out of a game with an injury, 2 bizarre home runs from Father Ibanez, and a mediocre--but not disastrous--pitching performance by Jeremy Bonderman.

Bonderman relied heavily on his fastball early in the game, lucking into (mostly) stellar fielding when good contact was made. Nick Franklin was, as usual, terrific at holding down the right side of the infield, and Franklin Gutierrez made a beautiful running grab off a first pitch fastball to Jed Lowrie that very well could have been a huge middle-of-the-plate mistake. Bonderman's line for the day was 5.1 IP with 6 H, 2 ER, and of course all of 2 strikeouts.

Meanwhile, in Tacoma, Erasmo Ramirez responded with a mirror of 5.2 IP with 5 H, 3 ER, and...10 Ks. Now, these are far from even comps, as Bonderman was facing a team of professional hitters who was tied for 1st in the AL West, and Erasmo faced a AAA team belonging to a minor league system that Baseball Prospectus ranked as 5th worst in baseball. But after the promotion of Taijuan Walker and Erasmo's recent success, the kind of lines that Bonderman put out today get more and more frustrating, as you can't quite call them disasters, or comeback performances. Hell, Bonderman put up a .316 BABIP and 3.98 FIP today, both a little more normal than his .235 and 5.21 averages on the season. But he managed to raise his xFIP this afternoon alone with all those fly balls, and at 5.57, he's sitting well below a big fluorescent "Awful." That is not my word used to describe that number. 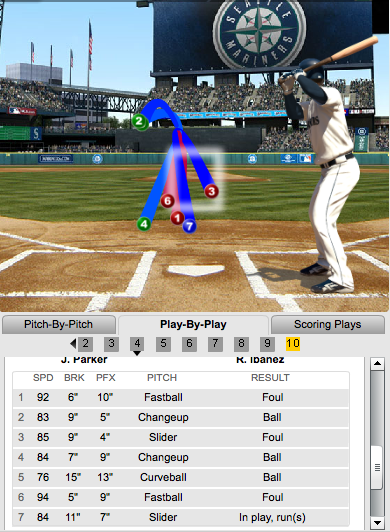 Raul Ibanez hit two home runs for some reason, and the second was off of an 84MPH slider from Jarrod Parker that looked like a golf swing (above). He drew a 7-pitch at bat from the A's righty, and with the sweet bells of expectancy ringing in his ears, struck out with 3 quick strikes in his next at bat off A's left-hander Sean Doolittle: 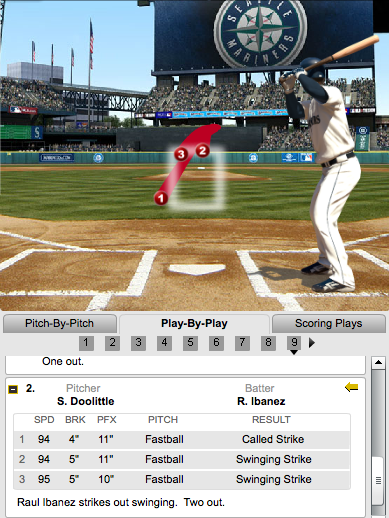 Just look at these two at bats. Nothing hanging, nothing high in the first one. 7 pitches, the last of which he crushed- after correctly predicting a 94 MPH fastball after a 76 MPH curve. Raul Ibanez is good at hitting baseballs off right handed pitchers. He looks like something altogether different while doing just about everything else.

But I think I'm over being upset, or even amused at this whole home run thing. Raul Ibanez just sort of happens now, like when your toast gets crumbs all over the counter in the morning, or when you step in gum and it just kind of eventually wears its way off the bottom of your shoes. I could keep complaining about the fact that he is taking away at-bats from young players in a crucial development season, but I'm gonna just enjoy this display of elderly max power, strap myself in, and feel the cheese.

After Bonderman got in trouble in the 6th, Eric Wedge brought in Danny Farquhar, who is rounding out a solid #2 on my list of Little Mariners, partly because he's one of the most exciting bullpen arms the Mariners have had in a while. But mostly because he is exactly as tall as I am and he gets paid money to throw baseballs for a living. Farquhar put away all 8 Athletics he faced until giving up a solo blast to Brandon Moss in the top of the 8th to tie the game. Hindsight is 20/20, and though it might have made more sense to put in lefty Oliver Perez to face Moss, who has been hitting .191 against LHP this year, just...whatever. The Mariners won. Kendrys Morales hit a 3-run tiebreaker in the bottom of the 10th, and it was refreshing to see this team emerge from the dugout for the second day in a row with joy on their faces.

Tomorrow is a day off until Pittsburgh comes to town on Tuesday to complete the 4-game interleague series. I'm driving up from Portland, and was really excited to get a chance to see Franklin Gutierrez again before anything happens, and then today happened, and now I'm pretty married to the thought that I may never see him play in person again. Jeff and Ryan Divish were talking on Twitter a bit about how stupid it is that the gut reaction to Guti's latest injury in some corners immediately results in anger towards the Gold-Glove winning centerfielder. But can you imagine how awful he feels right now? After being told that they finally might have found the source of his repeated injuries? And then this?

No matter what happens with Gutierrez, I'll always hold a big open field in my heart for the guy to camp out in and shag popups. There have been a lot of Mariners that I don't ever want to remember, but Guti will never be one of them. Here's to hoping for a speedy recovery, yet again.

(thanks to s0merand0mdude for pointing out my original gameday screencap above had glitched. Corrections made.)