The M's sneak one past the Athletics behind home runs from Guti and Raul, and a productive night from Nick Franklin.

Look at this fucking baseball card. 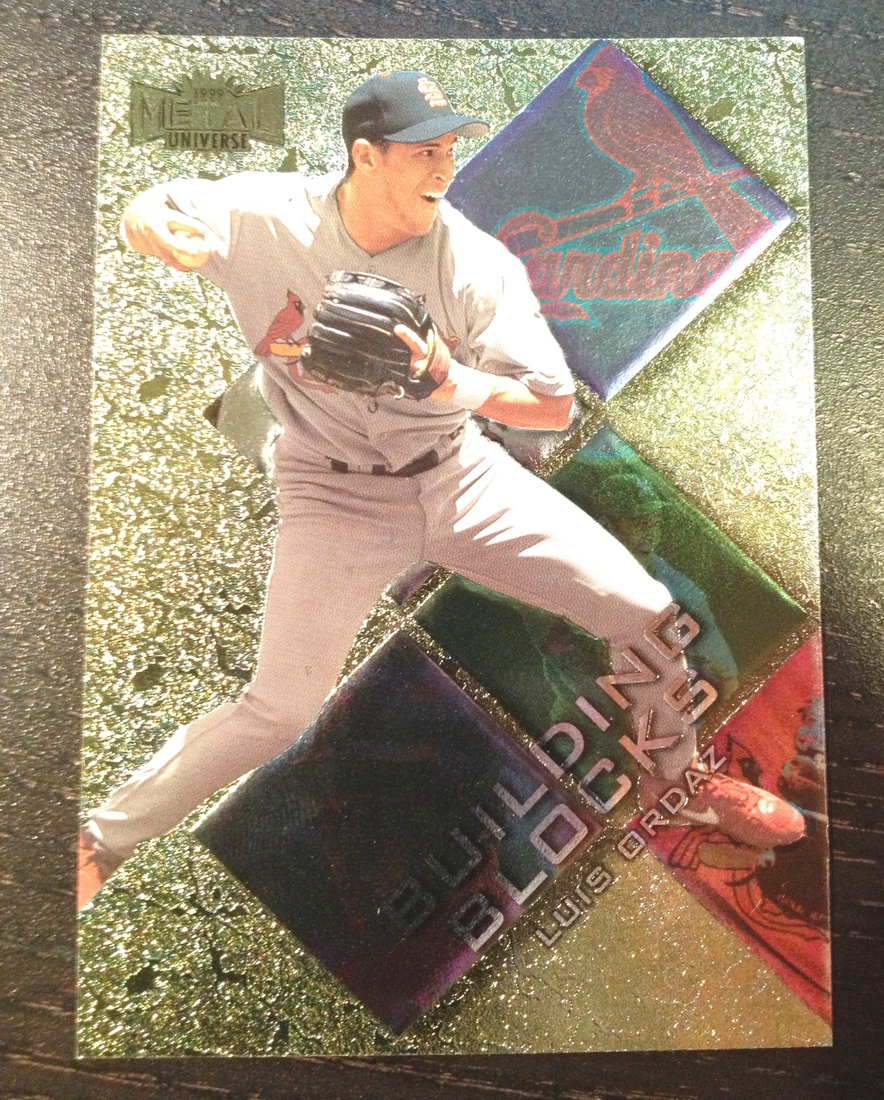 This is a cool ass Luis Ordaz holographic baseball card from 1999. It's shiny and looks fancier than the other boring cardboard cards that came in the deck when I bought it 14 years ago. On the back, it actually says these words:

"Ain't nothing like proving 'em wrong. We see you playing "Da Wizard" role as the defensive half of St. Louis' starting shortstop rotation in '98. Dissed as a "throw-in" in a three-way deal back in '95, who's laughing now? Ordaz, yeah rhymes with Pizzazz. Ya heard?" YEAH. I HEARD.

In 1998 Luis Ordaz batted .203/.261/.235 for the St. Louis Cardinals, and committed 13 errors in 54 games at shortstop behind opening day $3 million starter Royce Clayton. He was traded to the Royals in 2000, and other than his -1.4 WAR, 65 game season in 2000, quickly saw playing time slipping through his fingers, as he bounced through various minor league systems before eventually retiring in 2010. Ordaz was never quite what you would call "Da Wizard." He was touted as the "defensive half" of the 1999 St. Louis Cardinals' SS rotation, but his career FRAA sits at -5.9. He was by all means, a big, nasty, warty bust.

But you know what? This awesome sparkly gold card is just the kind of crap 12 year olds want to tear out of their cellophane packages when they go to Target to drop their five dollars of lawn-mowing money. Its literally a stupid worthless piece of cardboard dipped in shiny ink and stamped with a 3-D image on the cover so as to make its owner forget that it's the worst card in the entire bag. I don't even care. I'm 26 years old, and can't even remember anything Luis Ordaz ever did.

Whatever. It's shiny and neat. And you know what else? Today, our Seattle Mariners were shiny and neat, and exciting, and I don't even mind if they are the Luis Ordaz holographic card of the 2013 Major League Baseball season. I love this team, and I love this kick-ass baseball card.

Guess what, jerks? Tonight the Mariners beat the Oakland Athletics 7-5. Franklin Gutierrez hit a home run in his first major league plate appearance in like forty years, and played an entire game of baseball without even pulling a hangnail too far (over/under 40%). That's Cool.

You know something else? Raul Ibanez tied the game with a home run in the bottom of the 7th inning, his 15th of the year. And Nick Franklin went 3-5 with 3 RBI including the game winning run in the 8th, and Yoervis Medina pitched two clean late-game innings against an A's team tied for the lead in the American League West. How's that for holographic and neat? Huh?

You know what else? This team got down bad in the 7th inning. Charlie Furbush gave up a double to Jed Lowrie and (of course) intentionally put Yoenis Cespedes on base with one on and one out. Medina came in and gave up two back-to-back singles to Josh Donaldson and Josh Reddick, putting the A's on the board for first 4, then 5 runs to the Mariners' paltry 2. Defeat was yet again in sight, palatable, waiting to strike. But you know what happened? The Mariners didn't go home. They picked their pants up and pointed at the sparkly "Building Blocks" text on the card, telling each of the 20,704 fans at Safeco tonight that sometimes, just sometimes, this team can do something that makes us remember that we are watching a baseball game on a Saturday night because we enjoy it. Because we want them to win.

Look, we all know the Mariners usually look like a stupid 1998 Luis Ordaz baseball card. But if games like tonight don't make you smile for just a second, then I don't know why you are even watching anymore. I know I wouldn't be.