The sting of last night isn't going way very easily. While it wasn't quite shades of Cleveland in 2001 it felt that way, mostly because the beloved King was on the mound, and a lead that big is presumably in the bag, or another overused cliche. I don't want to talk about this anymore, mostly because it's terrible and makes my heart hurt, and also because living in yesterday's misery is something Mariner fans are treated to more than enough. Somebody sent an Edible Arrangement to Aaron Hernandez's house today. Somebody do that for Felix, please. Bury his misery with highlights of the Heat victory (Felix is an avid fan) and pineapple skewers cut like daisies.

I just did a series preview about the A's. I asked Athletics Nation some questions, and they subsequently answered them, like a good Q&A. The whole time I was writing the questions, I resisted the urge to talk about Carney Lansford. If the Mariners get swept, it's all the next one will be about. I need to warm up to writing about the god damn Mariners today, so let's talk about Carney Lansford right now.

I am pretty sure I have more Carney Lansford baseball cards than any other non-Mariner. I started to collect cards fairly heavily in 1987, and started trending down by 1992, right when his career ended. Being on the A's that whole era, he is as distinctive of a common card as Oil Can Boyd, and sported that glorious mustache throughout the years. 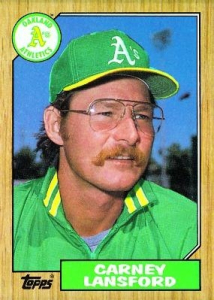 Carney Lansford is my age in this picture but encapsulates 80's Dad -- the glasses, the 'stache, perfect. And look at how awesome the green underbill looks on that hat. That was always such a weird addition to New Era 5950s -- while it's perfect for the A's, it was always a bit bizarre on Boston.

I could probably talk about Carney Lansford for another 700 words, but the Mariners do play an actual series of actual baseball games with the god damn A's again this weekend. The best cure for a Felixplosion™ is slamming a Hisashi Iwakuma bloody mary the next day, who will face off against Bartolo Colon, in what is easily the most interesting matchup of the series.

Bartolo Colon, despite his PED scandals and further connection to Biogenesis, is continuing a career renaissance. At age 40 through 14 starts, Colon currently has an ERA of 2.82 (best of career), FIP of 3.24 (best of career), xFIP of 3.88 (2nd best of career), and tERA of 3.32 (best of career). Colon has pinpoint control, holding an absurd 2.8% BB rate to date this year. Colon has 10 walks in 90.1 innings. What? Tim Lincecum walked 11 batters in his first two starts.

Remember when Colon won the Cy Young over Johan Santana because he had over 20 wins despite being measurably worse in every category? Any time you think baseball voting isn't making progress, think back to 2005. It wasn't even close, either.

Harang and Bonderman round out the series over the weekend, and Harang will attempt to catch up to his peripherals, while Bonderman continues to shove his the middle finger. Dave offered up a poll about who you'd rather have going forward at USSM (with numbers), and the results were surprising. I'll take Harang all day, every day.

This could get ugly real fast. At this point, I'm resigned to the fact that Bonderman is going to be around for a while, and it may take three implosions before he loses his place in the rotation. At the very least, Bonderman has probably earned a spot in long relief for the rest of the year. Meanwhile, Erasmo Ramirez lurks in Tacoma, silently dominating.

I'm looking for the crest of a new wave.