Share All sharing options for: Cy Young Felix vs. 2013 Felix

In reality, player comps don't really provide much insight. They are projections based off of similar attributes that players share. They lead to all sorts of different analyses from pundits to amateur scouts -- who will have a better career? Was that a fair comp? -- and so forth. If anything, player comparisons are a fun jumping-off point for conversation.

But what if we start treating player comps like UZR -- by making comparisons across a single player's career to see how they've improved or worsened.

I want to see which Felix Hernandez is better: The 2010 Cy Young Award winning Felix, or the current 2013 model.

First off, there is a sample size discrepancy that needs to be addressed. To date, 2013 Felix has logged 104.2 innings, while the 2010 Felix logged 249.2 innings. Since this year's sample size isn't even close to the amount of total innings Felix pitched three years ago, there are a couple of things we have to take into consideration. First, we have to stay away from counting statistics, as they will skew any sort of comparison or trend we want to look at. That means we'll stick to looking at ratio and rate statistics.

Second, to state the obvious, the picture we'll paint of the 2013 Felix will not represent what 2013 Felix will look like when the season ends. It's a small sample size to be sure, but it's a starting point for our dialogue.

I wanted to take a two-pronged approach to this. First, we'll use our eyes. I'll provide the .gifs, you provide the eyes. Next, we'll look at his statistics from 2010 to 2013 to see if there are trends we can find.

Coming out of spring training, Mariners fans were wondering if there was something wrong with Felix. His velocity was down, but his performance was as stellar as ever. Now, I don't think there is a fan, scout or member of the media that is worried one bit. So how does his fastball look compared to his 24-year-old self? I've titled the .gifs with the type of pitch it is, and then the MLBAM classification.

Right off the bat, we run into some classification problems. Nowadays, Felix isn't sitting 94-95 mph on his fastball like he was in 2010. But MLBAM is calling some pitches sinkers, while some of those sinkers are actually changeups. So to get an idea of what's going on with Felix and his pitches, let's look at some changeups he has thrown.

I deliberately made the 2013 .gif run a bit longer than usual before the pitch. Watch Montero: He calls for a fastball but Felix shakes him off. Montero then throws four fingers down and, what do you know, this pitch was classified as a four-seam fastball when it was actually a changeup.

The idea that pitches can become mis-classified is nothing new. Dan Brooks and his team are taking steps towards fixing that. In fact, hop on over to BrooksBaseball.net and you can see that the website has correctly identified what pitches were thrown to Miguel Cabrera in this particular at-bat. The info is in stark contrast to what is displayed on MLB's Gameday.

Additionally, Mike Fast has already weighed in on how MLBAM creates an algorithm for each pitch thrown. So, going forward we know to stay skeptical about what sort of data Gameday is spewing out, especially in regards to Felix.

Let's take a look at his other pitches.

Felix still has similar mechanics when throwing his slider. He finishes the pitch strong in both instances and he throws the pitch with the same arm action as his fastball.

Felix's curveball falls off the table as much as it did in 2010. And, of course, he's got the same arm action as his fastball.

Much of Felix's success now relies on deception rather than velocity. He's still got "stuff" though -- with the same arm action for each of his pitches, Felix has become the best pitcher with great bendy pitches with a velocity that doesn't average over 93 mph.

I would still call Felix a power pitcher. Although his fastball velocity is down, he gets the same amount of tilt out of his curveball and slider like when he was throwing 95+ mph, and the amount of run he gets on his changeup and sinker is still nasty.

There is an odd-pitch out: His sinker from 2010. Then, there was a definite separation between sinker and changeup. Now his fastball and change are only a couple of miles-per-hour apart.

Since we're not even dealing with a full season's worth of data, the best way to quantify Felix's current success against his 2010 counterpart is by using Fangraph's Batted Ball profiles. We can see if opponents have been hitting the ball harder against him, what sort of balls are hit, e.g. line drives, fly balls. There are flaws with LD%, but using all of the data in aggregate, we can fairly compare 2010 Felix to 2013 Felix.

Here's the quick answer: Felix Hernandez is still very good. At the time of this writing, his 62 xFIP- is the best in the league, right ahead of Yu Darvish, Anibal Sanchez and Adam Wainwright. His groundball rate is up from 2011 and 2012, just a percentage point less than his 2010 rate. His home run to fly ball rate is back to being above average at 8.5%.

But is Felix getting lucky? Is the rise in his line drive percentage and the decline of his HR/FB rate a result of luck? Let's take a look at his career BABIP chart, courtesy of Fangraphs. 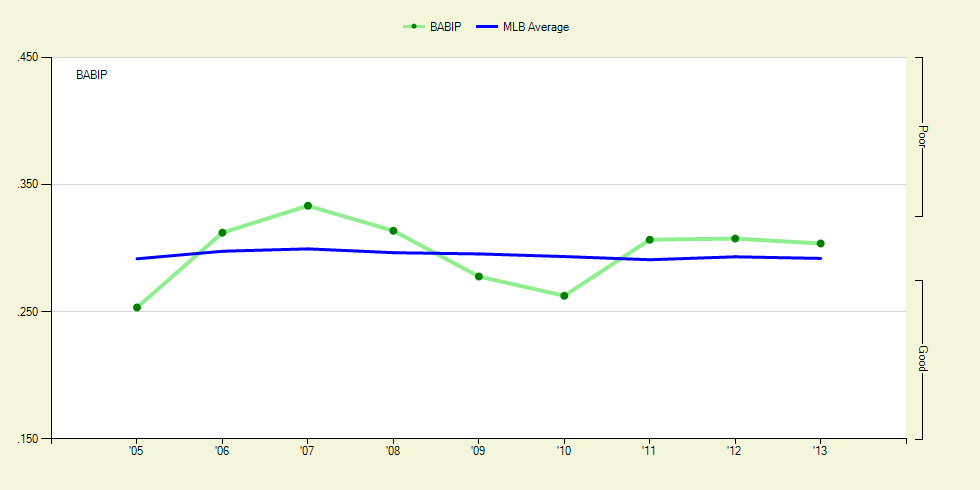 His Cy Young Award might have been won due to luck, sure. But he's not getting cheated this season, not yet, anyways.

And of course, here's his average fastball velocity according to pitchFX.

But that is just his fastball velocity on average. Here is the month-by-month breakdown of his velocity this year courtesy of BrooksBaseball.net.

So the plot thickens. Every other season, with the exception of the 2012 and 2013 seasons, Felix's overall pitch velocity would start two to three mph higher on average than when he finished the season. This year, his velocity is steadily increasing.

There's an argument to be made that pitchers get stronger as they get deeper into the season. We had just never really seen Felix's velocity dip so low. This season could just be an anomaly and maybe his velocity returns, who knows.

I want to look at one more set of data. Let's look at the sexy numbers.

Felix's strikeout rate has increased while his walk rate has decreased, and over the last three years his BABIP has remained constant.

Here's the weird thing. His swinging strike percentage has increased steadily from 2011 to 2013, from 8.8% to 10.6% to 11.5%. But, on average, he's inducing far less swinging strikes with his slider and curveball, but considerably more with his changeup. 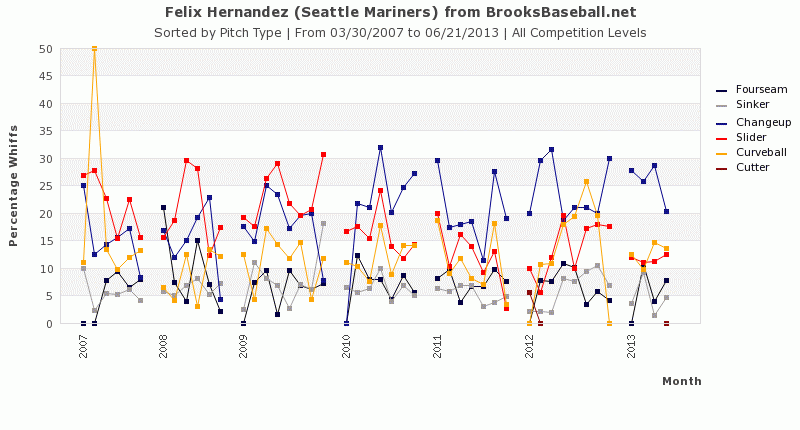 Felix Hernandez is really good. We already knew that. But it's encouraging to see that he can still surprise us.

So which version of King Felix is better? It's hard to say really -- they both are pretty amazing. There's no doubt that the former Cy Young Award winner is a different pitcher than he was in 2010. There might be some lingering questions about his missing velocity, or even his gaining velocity. But I don't think there's any questioning that he's just as good as he was three years ago, if not better.