Share All sharing options for: 32-41: Mariners Aren't As Good As Mike Trout 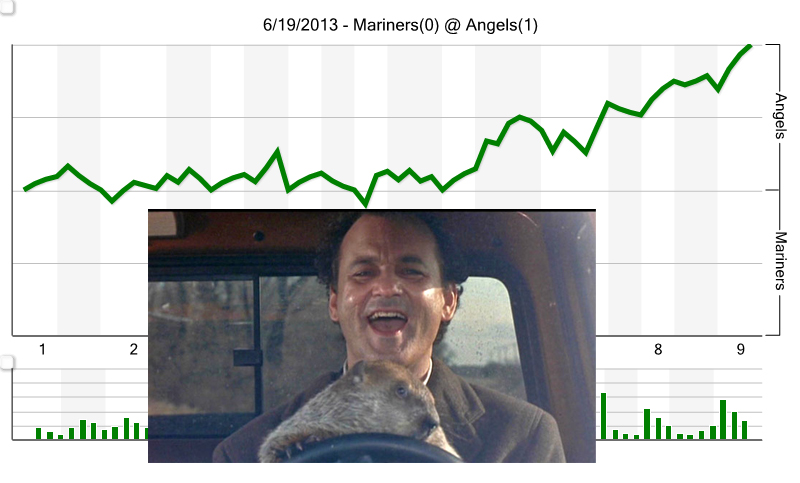 Tonight the Mariners lost their 9th 1-0 game since the beginning of The Great Winter (2010). As a result of this oft repeated outcome the team has left me, a lowly amateur sportswriter, the unenviable task of summarizing the events in a way that paints tonight's contest as a unique spectacle. My efforts can be found below.

DATELINE (NORTH AMERICAN CITY): In a game that seemed to have no clear cut winner it was the Mariners who's coin landed on tails tonight as they were defeated by (OPPONENT) 1-0. While a lineup featuring (IMPOTENT/INJURED VETERAN) and (RUSHED PROSPECT) showed the zeal and verve of contenders it was rendered all for not. The unfortunate lapse in runs overshadowed a sterling effort by (MARINERS PITCHER) who drew a tough luck loss.

"(MARINER PITCHER GIVES QUOTE ABOUT NOT WORRYING ABOUT RUN SUPPORT)."

Asked about how the offense was shut down (MARINER MANAGER) said: "Well our guys competed out there. I felt like we were well prepared and put in professional at bats. There were a lot of balls hit hard that just happened to find some gloves and you're going to have games like that. This is a game of failure and overcoming adversity. While I like to think we never say die and you never want to accept defeat sometimes you really have to acknowledge that (OPPOSING PITCHER) really had himself a great game. Sometimes being a champion means knowing when you're beat and tipping your cap. We'll be out here tomorrow ready to try and salvage (SERIES/ROAD TRIP/MONTH/SEASON/CAREER)."

(AGED FAN TOTEM): "I think part of what this season has been about has been setting an example for these young guys. Y'know games like tonight, where you just don't get anything going? Those are gonna happen in a 162 game schedule. What these young players need to learn now is that we don't let that get us down. It doesn't matter what our record is or how many games out we are you show up the next day ready to play. Ready to honor the uniform."

The Mariners are a long ways from the optimism and boundless hope of a few short months ago in Arizona, now finding themselves (10+) games out of 1st before the All-Star Break. Despite the frustrating results so far (GENERAL MANAGER) is quick to point to reasons for hope, citing a bevy of young prospects in the minor leagues that have the organization confident that better times are soon to come, and this time they'll be here to stay.

(GENERAL MANAGER): "There are no quick fixes for something like this. We have to do it the right way and that takes time. I think if you look at what we've got going down in (MINOR LEAGUE AFFILIATE) with players like (PROSPECT, PROSPECT) and (PROSPECT) you'll see that we aren't that far away from putting together something really special here. I'm confident that success is coming soon."

The Mariners finish their series against (OPPONENT) tomorrow as (FELIX FUCKING HERNANDEZ) faces off against (SOME ASSHOLE THAT PITCHES FOR THE ANGELS).