Dustin Ackley is hitting a bunch in Tacoma. Is there real progress that warrants a recall?

Share All sharing options for: On Dustin Ackley's Progress

It's believed by many in the scouting community that within Dustin Ackley's body remains a good hitter. His woes -- they'll tell you -- are less related to a lack of skill and have more to do with mechanical issues that are fixable.

After being demoted to Triple-A Tacoma, his first game yielded an 0-4 performance. Since then, the former second overall draft choice is tearing the cover off the ball. Entering play Thursday night, he had a video-game-looking triple slash line of .417/.527/.583 during a hit streak spanning the 13 games since. So, it's easy to begin to wonder if he's "fixed."

Here is his game log since being sent down:

We have to look at these numbers within their minor league context, of course. Ackley's first week with the Rainiers included a trip to Colorado Springs. While the Sky Sox use a humidor -- as made famous by their parent club, the Colorado Rockies -- it's still an extreme hitter's park in one of the top hitter's leagues in baseball.

Ackley collected nine hits over the course of four games in that bandbox. A third of those went for extra bags. While that sounds awesome, his mechanics still weren't consistently sound. He was still leaking, stepping in the bucket and over-striding at times. Boy, that sure sounds negative doesn't it? How about something positive? Okay, here you go: 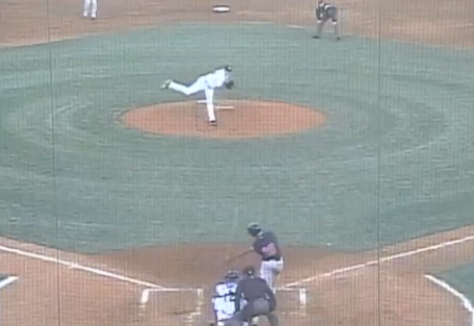 While the angle provided by the minor league broadcast wasn't ideal, this is a still image of Ackley as he connects for a dinger in the second game of that series. In this particular case, I think we can see enough to show that Ackley's mechanics were sound and it wasn't a pure luck homer thanks to a friendly hitting environment. He's covering the outside portion of the plate -- an area of immense concern for him -- and you don't see that front foot leaking out toward first base.

It's just one homer, two days after being sent down, in a park that may have helped it be a homer. But the two major identified issues with Ackley's struggles were not seen during this particular swing. So, we can employ cautious optimism that these things have been identified and are being worked on.

Since then? He's kept on rolling and is driving the ball with authority more. One thing that I've loved seeing in Tacoma is that he's not only driving the ball, but driving it to the opposite field more. Dustin Ackley had become something of a pull hitter in the big leagues over the last year, rolling over and weakly bouncing the ball to the second baseman. While he's got the speed and hustle to leg out some dribblers and avoid double plays -- signs that he's playing hard despite his woes -- that isn't the hitter we want Ackley to be.

Another plus is the walks. I know, more caveats! Minor league pitchers with worse command, etc. We can't just keep piling the asterisks on everything, though. There comes a point when improvement can be identified as improvement, even in a small sample. I'm perfectly fine with labeling the collection of 12 unintentional walks in 14 games as a positive step. What's that? Only 9.3 percent strikeout rate? Sounds neato to me, too. 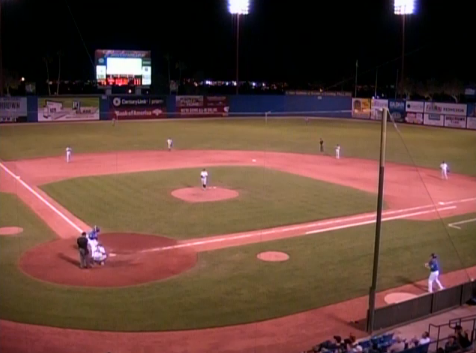 You're going to have to take my word on this one, guys, but Ackley is out there. Somewhere. This is the reality of watching many Tacoma road games on MiLB.tv.

It might be hard for me convince you that the Ackley-to-the-outfield trial is only now being done because the Mariners feel his head is back where it needs to be at the plate. Then again, Jesus Montero didn't even know his new teammates' names before he was playing first base for Tacoma. Still, I think there's something to it. Jack Zduriencik and his team know the importance of a correlation between the success of Dustin Ackley and that of the big league club. Plus, Ackley's played out there before so it's more like driving a stick shift for the first time in a few years than climbing Mount Everest for the first time with no training.

Adding some versatility with an athletic baseball player is a good thing for a club that's currently strolling out an old, struggling and injured group of grass patrolmen. I still wouldn't label myself as a Nick Franklin believer, but, as long as he's hitting, why force him out? It'll be interesting to see how much Franklin plays at shortstop when Ackley comes back and how often Ackley plays left field to keep Franklin in the lineup. Brendan Ryan has brought himself back to being valuable, so there's just no chance he's riding the bench as long as he's hitting with trade season looming. And, obviously, you're not bringing Ackley back to be a utility player.

If I were to guess, I think Ackley stays with Tacoma until June 22. That's when the Rainiers return from their current road trip -- with the Mariners getting home the day before. That should be ample time for Ackley to get a few more reps in left while staying fresh at second. It also gets us closer to the point that teams will start considering trades -- be it for Ryan or Franklin. If Ackley is still riding this hot streak and the mechanics still look consistent, there's just no way the club can convince anyone that he should still be in the minors.

I know about the small samples, asterisks and caveats. I've seen positive mechanical signs from a once- and again-promising young player, though. This isn't 100 percent result without process improvement. Dustin Ackley is getting better and, dammit, sometimes it's OK to just be a fan and hope for something good to finally happen.