The Share of Blame, and Trying to Understand Things We Cannot

A look at the difficulties of being a manager, and trying to rationalize things we cannot possibly know.

I don't envy Eric Wedge. When he makes the right decisions, the glory goes to the players who carried out the situation he put them in. When his players fail, the vitriol is split between the player and Wedge, the latter of which is often an easier scapegoat. Players are loved, idolized. When was the last time you saw anybody wear an Eric Wedge jersey? After all, we know that good teams win because they have good players, and no great manager is going to save a team that has marginal talent. Being deemed as a great manager is often the result of the talent that carries you.

Was Lou Piniella a great manager? You can't deny he had great talent around him for much of his career. He won a World Series with a team that only won 91 games. He managed four 90 win Mariners teams in a decade, including the miraculous 1995 run. He couldn't do anything with a bad Devil Rays team. Sit down at a sports bar in Seattle during a game like last night's, and you might be treated to a lament for Lou Piniella, still. "Why don't we bring him back? He's gotta be younger than Leyland" (note: actual thing I have heard in bars three times this season alone. One time it was Charlie Manuel. Both are slightly younger than Piniella.) Custom Piniella jerseys are now sometimes seen around Safeco. The glory of the era remains, and past sins are absolved. 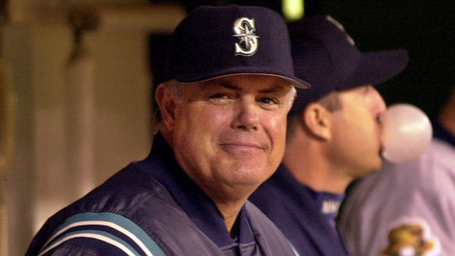 There's a worship of Piniella that remains over a decade since he left. Mariners fans have let the little things go, and have chosen to remember the great moments. Fans still loathe Bobby Ayala, but few seem to remember the faults of a manager who kept running him out there in 1998 in key situations. Ayala had a 11.62 ERA, 1.006 OPS against, and 2.051 WHIP in save situations that season. He allowed a 1.176 OPS against in high leverage at-bats - .435 batting average. It's actually borderline incomprehensible how bad he was when it was important. Bobby Ayala threw 75.1 innings in 1998. The Mariners bullpen was horrific that season, but Piniella's tactical decisions were often questionable. His Mariner teams had the offensive talent to overshadow it.

Fans still loathe Bobby Ayala, but few seem to remember the faults of a manager who kept running him out there in 1998 in key situations.

Years have passed, and fans have forgotten Piniella's questionable bullpen management, and praised him for the great teams he was fortunate enough to manage. Ayala is remembered with eternal contempt. Being a manager is tough, unless you happen to be on a team that makes the playoffs, then all's forgiven, especially if you were the first manager to do so after years of incompetence.

I spent a good chunk of last night trying to understand why Eric Wedge pulled Jeremy Bonderman after 89 pitches in order to give Wilhelmsen a chance for the save. The thought process I could understand was that a) Wilhelmsen is a closer, and this is a situation where closers pitch b) Bonderman hasn't shown enough this year to finish a game on his own c) it's the Astros and it's a good time to get Wilhelmsen back on track. None of these justifications made any sense to me, but if I really try, I can sort of justify them in Wedge's mind. A large part of being a successful reliever is confidence, and there's never a great time to put a closer in to regain it. His job is to close games, and while that's a silly defined role worth another post entirely, that's the mentality, the expectation he faces. It's hard for a closer to regain confidence in that role until he successfully performs it again. When you're dealing with amped up relievers who only pitch an inning at a time, things get weird trying to make conclusions about when is the right time to throw him back into the fire. It's not an exact science.

There's not much more to be said that hasn't already been said. It's impossible as a fan to know every thing that goes into a manager's decision making. Wedge has access to these players on a different level than anybody else does, and his decisions are based on that as much as they are based on the numbers. Fans and bloggers alike only see things from one perspective, and often don't have the humility to admit there's more at play that can't be seen. Nobody's sure what's wrong with Tom Wilhelmsen, really. You can look at his pitch selection, his release point, his control. You can take these things and generalize it as confidence, which fits neatly into a tried and true narrative. What causes that confidence loss, exactly? There's things that those in the clubhouse know, and we don't.

Eric Wedge probably made a bad decision last night. Now he's taking lots of heat today, and wouldn't take any if the Astros swung at worse pitches and missed the meatballs. Perspective is everything, and one day like last night doesn't make or break my opinion of a manager. Multiple years of bad tactical decisions? That will do it. Being a manager must suck.