In one of the stranger schedules we've encountered, the Seattle Mariners jump from an April that featured the ebb and flow of an indentured servant's to a week in the life of the NBA, playing two games in four days. The Mariners have two against the Pittsburgh Pirates before another off day Thursday.

The Mariners first taste of "interleague play is no longer special" will be abbreviated, but at least we get to see Felix Hernandez hit against A.J. Burnett.

Charlie Wilmoth of Bucs Dugout participated in a short Q&A to help fill us in on Seattle's seafaring nemeses (nemesises, nemesi?).

Jon: Former top prospect Pedro Alvarez has struggled to find his footing in the big leagues, falling well short of lofty expectations. What do the Pirates have in Alvarez? What is his ceiling at this point?

Charlie: Clearly, he strikes out way too much. I don't think strikeouts are substantively worse than other kinds of outs, but if you're striking out a third of the time, hitting for a good average is very difficult. Alvarez's strikeouts often come in bunches, as he continues to have long stretches where he looks like he would be lost even against Double-A or Triple-A pitchers.

He also frequently goes on tears where home runs almost seem inevitable. The question is whether he can improve his strikeout rate. Some players improve their strikeout rates after striking out a ton early in their careers, but most of the ones who do were either more athletic than Alvarez (Austin Jackson, Curtis Granderson) or had better plate discipline (Cecil Fielder) or both (Bobby Bonds, Mike Schmidt). Alvarez still has substantial upside if he can improve his strikeout issues, but if he can't, he's Pete Incaviglia -- a useful, but frustrating, power hitter who will probably flame out at a relatively early age.

Jon: Left fielder Starling Marte has been the Pirates' top offensive performer so far this season, hitting for high average and finally showing the power prospect evaluators always believed he could develop. Is Marte a budding star?

Charlie: Yes. He may or may not end up being widely recognized as a "star," but he'll likely be as productive as one. Josh Reddick was 4.5 wins above replacement in 2012, thanks largely to his defense; Reddick and Marte are pretty different as hitters, but that's a good template. Marte chases too many pitches, and he may have to re-adjust once NL pitchers adjust to him, but he's talented enough to do it, and he'll still provide lots of defensive and baserunning value in the meantime. 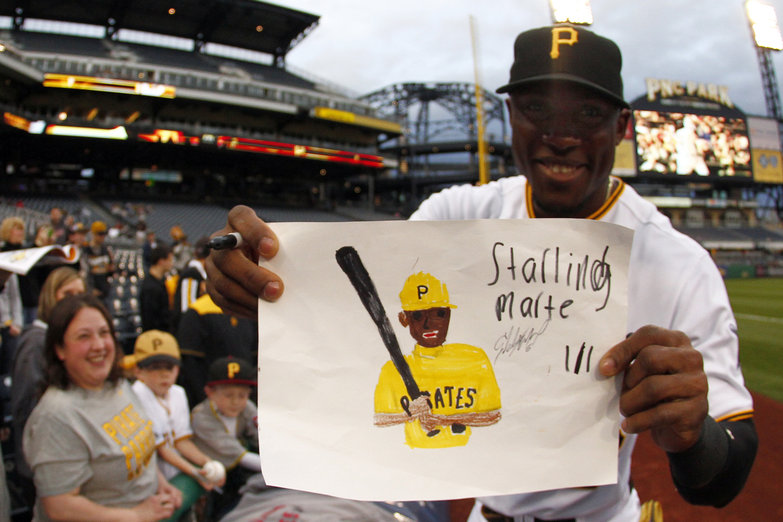 Jon: A.J. Burnett has become the Pirates staff ace, bouncing back well from a rough stretch with the Yankees. After a resurgent 2012, Burnett is charging out of the gates this season as one of baseball's strikeout leaders. What has been the key to the 36-year-old's success?

Charlie: He's craftier than he used to be, and his command has improved. But the biggest key was simply moving from Yankee Stadium and the AL East to PNC Park and the NL Central. Acquiring Burnett made a ton of sense -- he had a 5.15 ERA in his last year in New York, but his xFIP was 3.86. He was still striking out a ton of hitters with the Yankees, and after he got traded, he got to keep doing it against lesser hitters, and no DHs. Burnett is simply a good pitcher, and being with the Yankees hid that for awhile.