Are the Mariners scoring as often as they "should" be?

I spend far too much time doing nothing productive on sites like Fangraphs and Baseball Reference. They're enormous bastions of information and I literally get lost for hours doing silly things like trying to find which pitcher with one career game in the last 20 years had the best start (Chris Saenz). Occasionally, though, I find something that might actually be worth sharing.

I was comparing Seattle's runs scored with their wRC+ over the past few seasons, and I noticed something funny: going back a few years, the Mariners have consistently scored fewer runs than their wRC+ would suggest. For example, the M's 98 wRC+ this year ranks 15th in all of baseball, smack in the middle of the league. However, they're just 22nd in runs scored with 117, and 25th in runs per game. It's a pattern that holds over several seasons: going back to 2006 -- as far as I looked -- the M's have never finished higher in the league in runs than they did in wRC+.

My second thought : you moron, OF COURSE they've scored less often than their wRC+ would indicate. wRC+, by definition, includes a ballpark factor. The Mariners play in an environment that suppresses scoring, and naturally, they've had low run totals. No eureka moment.

Still, I thought I might have been on to something. There have been times over the past several seasons where extended scoring droughts -- which have not been uncommon -- were explained away by poor sequencing. My initial fleeting assumption was that a comparison between wRC+ and runs scored would reveal whether this has been a several year trend or not. While wRC+ won't work because of secondary adjustments, the statistic's simplified form, weighted runs created (wRC*), is something we can use to make a valid comparison.

* wRC might look kind of weird hanging out by itself, but it's basically just wOBA without dividing by plate appearances or applying a scaling adjustment.

To prove my point, I took a look at how well runs scored correlates with weighted runs created. I went back to 2010, and looked at the relationship between every team's total runs and their wRC over that time.

It turns out that they correlate pretty strongly. I even made the world's most primitive looking scatter plot to prove it: 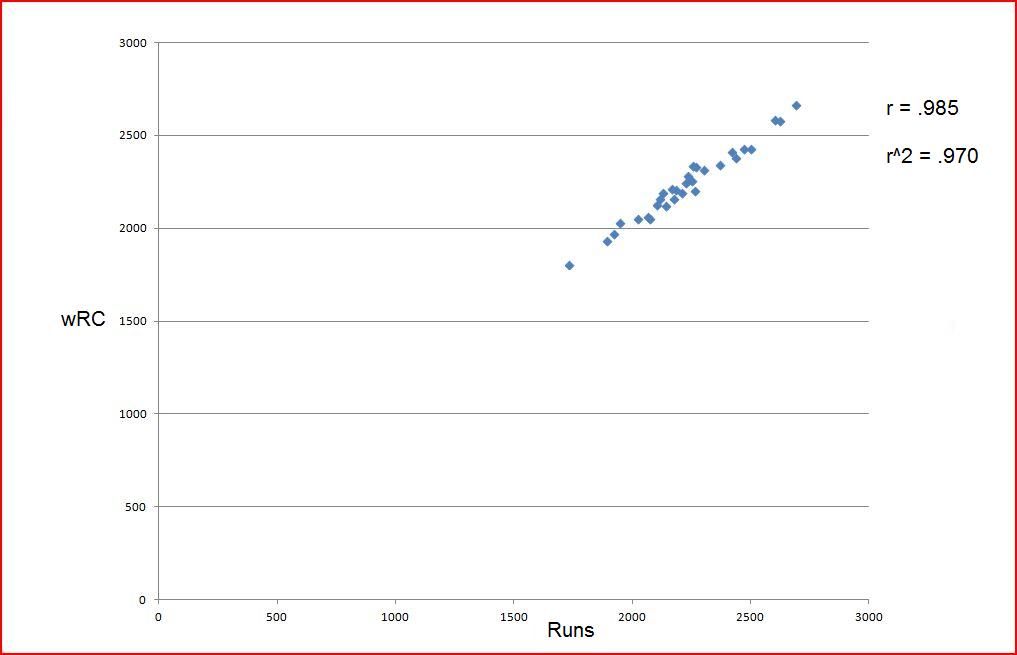 In that time, the Mariners have scored 1,805 runs, and have created 1,734 runs. As it turns out, the M's have actually scored 71 more runs than we'd have guessed, based on their team wRC. Only the Rays and Padres have outscored their wRC's by more than the Mariners.

Thus far in 2013, it's a different story, as the Mariners have scored fewer runs than their wRC would indicate. They've created 130 runs, tied for 14th in the league, but, as mentioned above, have only scored 117. Why the discrepancy?

The short answer is again sequencing. The Mariners are simply doing a disproportionate amount of their good hitting with nobody on base. For instance, the M's are slugging .395 with the bases empty, but just .375 with men on, and only .336 with runners in scoring position. By comparison, the league as a whole slugs a little better with runners on, not worse. The M's also have a paltry .216 batting average with runners in scoring position, a mark .38 points below average. Finally, 71% of the Mariners homers have been solo shots, compared to just 60% around the league. Altogether, it's easy to dissect why the team hasn't quite scored as many runs as their wRC would suggest they ought to have. In a sentence, their RE24* has been quite low this year.

* Batting runs adjusted for how well a team has sequenced their hits throughout the season.

What's more difficult is figuring out why, and determining whether or not there is anything systematic about why the M's offensive output has been a bit low this year.

I'll be honest: I have no firm conclusion here. My guess is that, since most teams hit better with runners aboard, that the M's will fall into that pattern sooner rather than later as well. It's possible that teams are intentionally pitching around power hitters when they come to the plate with runners aboard, a strategy that could conceivably work if said power hitters are impatient and willing to subject themselves to weak contact by chasing pitches outside the strike zone.

If that sentence made you think about Michael Morse, that was intentional. Here's how the former National has hit with and without runners aboard in 2013:

You can make an argument that a big part of the Mariners failure to score as many runs as their underlying offensive performance would indicate has been because of bad sequencing in Morse's at-bats. You can also use Morse's career stats to suggest that such a split is unlikely to continue:

Similar patterns exist for Kendrys Morales and Jason Bay. Neither have gone deep with a man on yet -- Bay's numbers are significantly better with nobody on base across the board right now -- but both have career splits that indicate that the trend likely won't continue.

Ultimately, sequencing is important. The Mariners have scored mildly fewer runs than their offensive numbers would indicate, largely due to a poor performance with runners in scoring position. As far as I can tell, there's no reason to think that there is any systematic explanation behind that lack of production yet, outside of simple misfortune. It might be worthwhile to watch and see if opposing pitchers are significantly adjusting their approach to certain hitters based on whether or not runners are on base, but my guess is that this is just sample size related variance, and that the M's should convert a few more scoring opportunities going forward.