The Mariners start a three game weekend series against the Twins, who do not have Dan Gladden on the field anymore but do in the booth. Also, either Jeremy Bonderman or a ghost will pitch on Sunday. 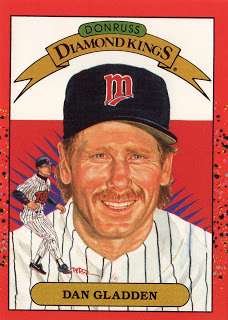 Kent Hrbek! Pat Meares! Dan Gladden! These are players who played for the Minnesota Twins many years ago. I'm here to inform you that the Mariners are about to play the Minnesota Twins in a three game series, and it begins at 5:10pm tonight. None of the aforementioned players will be playing in this series, but you can dig through your attic to pull out their baseball cards in order find all of their stats and neat trivia, which you can't find on the internet. Take that, internet! Here's another neat fact, former Donruss Diamond King Dan Gladden is now a radio broadcaster for the very same team he played for. Aaron Goldsmith is 29 and most definitely owned this baseball card. Now he's his peer despite being 26 years his junior, and that is exceptionally wonderful. This blog has a writeup on this card and the delightful trivia on the back, which I found on the internet. Point, internet.

A ghost is scheduled to pitch on Sunday, or Jeremy Bonderman. Currently the projected pitcher for Sunday's game versus Minnesota is TBD, Jeremy Bonderman, or one of those grey silhouettes with the question mark over the face. Has anybody ever done any research to find out the player profile that was used for the ghost player template? What if it was Jeff Gray? He was a ghost once too.

Unless the team sends out an actual ghost to pitch on Sunday who would probably be more successful than the replacement, the Mariners will likely make a move. I don't regret that I can't make a Casper Wells ghost joke here because those are terrible, but I do regret that I'm not tempted to make one.

Some outlets (CBS) are assuming Bonderman's the guy, but I'm skeptical, or maybe I have too much faith in the organization. Bonderman has an opt-out clause in his contract by June 1st, and while I highly doubt anybody is willing to give him a better shot that he has with the Mariners, he could go try his luck with somebody else. He was also yanked early from his last start for no apparent reason. Given that the Mariners have invested this much time in him, I doubt he'd exercise it without a guaranteed MLB spot from another team, but stranger things have happened. He probably has a nice little month-to-month place in the nice part of Tacoma anyways.

Here's the problem with assuming Bonderman's the guy. Jeremy Bonderman is almost certainly but not positively terrible. The Mariners may have their hand forced by his opt-out clause one way or another. When Bonderman was semi-good and posting xFIPs under 4 (2004-2007), he was throwing a lot harder than he is now (~93mph, now sitting 88-91), and he could miss some bats. Bonderman is now rocking an uninspiring 4.6 K/9 in Tacoma to go along with his 4.52 ERA/4.49 FIP.

Bonderman has some of that magical veteran fairy dust that may keep him alive in a big league start or two, but probably not. There's also no reason to assume he should be the guy. Maybe the Mariners will bring him up to be a long relief man, but there's better options, as disgusting as they are. Blake Beavan has at least shown somewhat of an ability to survive in the majors without striking anybody out (4.10 career K/9), and even though Hector Noesi is currently in the Mariners bullpen, he hasn't thrown an inning since May 21st, which was a game he started for Tacoma (and got shelled). He could easily make a spot start, and the team could recall Luetge for the weekend instead.

None of these options are good, but I see little benefit to giving Jeremy Bonderman a shot other than to be a nice guy to a local kid, and that's a terrible way to run an organization. He's put in the work, but he hasn't earned his way back to the majors. He also isn't on the 40-man, and there isn't anybody worth DFA'ing just for a few starts of a guy who is probably going to be terrible and only be around for a few weeks. The Mariners can manage with what they've got until Erasmo Ramirez is healthy enough to join the rotation. Get well soon, Erasmo.

Either way, Alex Liddi should get his 2013 MLB passport card stamped by Seattle while he can, as Smoak or Morse should be ready to go by Sunday, allowing the team to ship him back down to Tacoma for a pitcher. Alex Liddi's place probably isn't as nice as Jeremy Bonderman's.