They have hashtags and everything.

Share All sharing options for: Examining a Painfully Optimistic Section of the Official Site of the Seattle Mariners 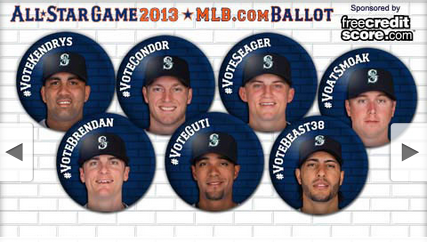 Which leads to things like what you see above. For one reason or the other, I end up on the Official site of the Seattle Mariners from time to time, and during my last handful of visits, I've been compelled to notice this presentation. The Official Site of the Seattle Mariners would like you to vote for Seattle Mariners on your All-Star Game ballot. To persuade you, they've created this electronic brick wall, along with these electronic brick button-like face framers. They have created original Twitter hashtags for each worthy Mariner, all the better for you to utilize social media in announcing your fan allegiance. Sponsored by your favorite somewhat fraudulent credit report and credit monitoring service freecreditscore dot com!

Of course, these Mariners are not good. This is not news. Not a single one of them is a deserving All-Star. Not even the good ones! Well, of course there's Felix, but they didn't even include him in all of this because they didn't want to insult him. I'm pretty certain that this image has been redesigned, that it used to feature both Dustin Ackley and Jesus Montero as well. I can't tell if that makes things more hilarious or more sad. Probably both. I like both. Good combo.

And so the image depresses me a bit. The Mariners players the Official Site of the Seattle Mariners would like you to vote for are not good enough to be All-Stars, and I'd prefer them to all be good. I would like them all to be worthy All-Stars, but they are not, and so instead I make jokes, which depresses me even further. Because after the fleeting rush of landing a hot zinger has subsided, I'm left alone with nothing but self-reflection and rumination on my choices, which exposes me as a person on the Internet making fun of other people's honest and wholesome optimism and good-nature, which makes me an asshole, and so I make jokes. I think this known as The Baseball Writer's Shame Spiral.

For your reference and record keeping, here is a list of all the Mariners player hashtags and how many times they've been used via Twitter.

#VoatSmoak: 0 (a complete miscarriage of justice)

#VoteBrendan: 3 (once regarding the reality show Big Brother 13, and the other two times regarding some sort of curling event)