I've never quite understood how some sports fans root for multiple teams within the same league. You root for the Mariners and Orioles? What? Your National League team is the Reds? What does that even mean?

But if I was forced to pick a Team B, I might go with the Toronto Blue Jays. I was born in Ottawa, so I could use the Canada angle to justify it. I remember liking Kelly Gruber based on my baseball card collection, even if I had never watched him play. More relevant to the present, GM Alex Anthopoulos seems to know what he's doing and the team's decision to go back to the old logo and color scheme -- perhaps the sharpest in the league -- was fantastic.

They are not my team, however; they are Tom Daker's team. Tom joins us from Bluebird Banter to fill us in on the 2013 version of the squad.

Jon: The Jays went from trendy World Series pick to the bottom of the American League in about a month. What has to go right for the Jays to change course, close the gap, and make their season interesting again?

Tom: Man, it is hard to believe what is happening. Everything is going wrong. The defense has been awful, the pitching has been bad and we aren't hitting. Unfortunately there isn't much more to the game than that. I think we need to sacrifice a chicken or an infielder.

The Jays had, at least I thought, a really intelligent off-season. They picked the parts of the team that most needed upgrades and brought in proven players to fix those spots. It all should have worked. It hasn't.

There has been an element of bad luck, the team's BABIP is .263 and it does seem like they have had a lot of hard hit balls that have hit gloves, so there should be some progression to the mean there. And almost no one is playing up to the level even the most pessimistic of us thought they would. If they just play the way they should, things will improve. It almost can't get worse.

Jon: What parts of Brett Lawrie's game excite you the most? How do Jays fans react to his antics?

Tom: Brett's defense is amazingly good. He makes highlight reel plays almost daily. He has great range at third. He really should get considered for a Gold Glove. Take a look at this from the other day:

He's working on trying to control himself some and, so far this year, it is working. He really is an exciting player. He's young, his dial goes up to 11. I think he'll grow up some.

Jon: Many Mariner fans were sad to see Munenori Kawasaki leave. What sort of adorable things has he been doing in Toronto this season?

Tom: He is fun, with the bowing and dancing and the fake steals. He's added a bit of life to a depressing season. He showed off some dance moves for Toronto newscaster Kathryn Humphreys. (Ed. note: must click link.)

Unfortunately, he's made a couple of very poorly timed errors, which, along with his inability to do anything with a bat, is kind of dampening the affection felt for him. We still love him at Bluebird Banter, and we are trying to drive to get people to write in his name on the All-Star ballot. I'd love him to get more votes than Derek Jeter. Our latest 'Vote Kawasaki' video is here.

Jon: Swapping Brandon Morrow for Brandon League and Johermyn Chavez was a move that didn't look great for the Mariners when it happened and hasn't gotten any better with time. Describe Morrow's development during his three-plus seasons with the Blue Jays. 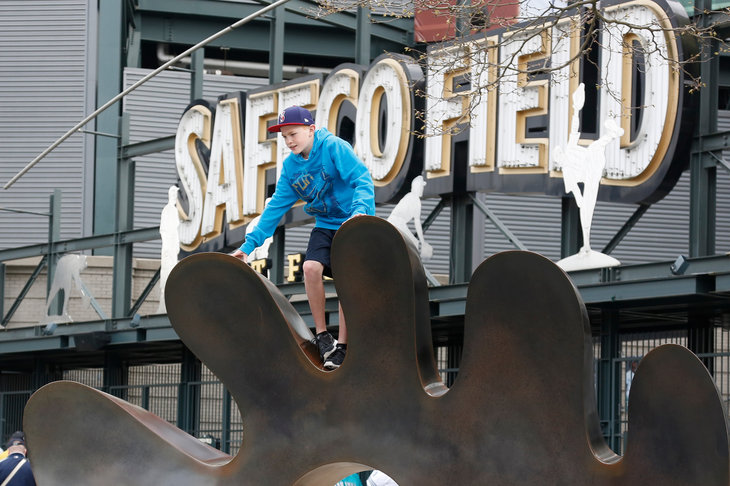 Jon returned the favor and answered a few questions for Tom.

Tom: I'm so glad we made that trade, Morrow's been a favorite of mine since he came over. Last year I talked to the Jays' former pitching coach about Brandon and he told about how they worked to get his ability to shine through.

His first season here, he had a hard time keeping his pitches close to the strike zone. His pitches moved so much that they would move right out of the zone. He walked way too many. They spent the first season trying to get him to be able to control his pitches. To throw strikes.

The next season, he was too much in the strikezone. He was getting hit hard, too many balls in the middle of the plate, thigh high. Kind of going to the opposite extreme.

Last year they put it all together, getting both the control and the command. He could throw in the strikezone but keep his pitches down, where they didn't turn into home runs so often. He was the ace of our staff, until he hit the DL with a oblique strain.

This year? He's not quite where he left off last year. The command isn't there but he is close. I'm hoping he figures it out soon.