Win Expectancy Chart, courtesy of Fangraphs, for the Padres at Mariners game on May 28, 2013. 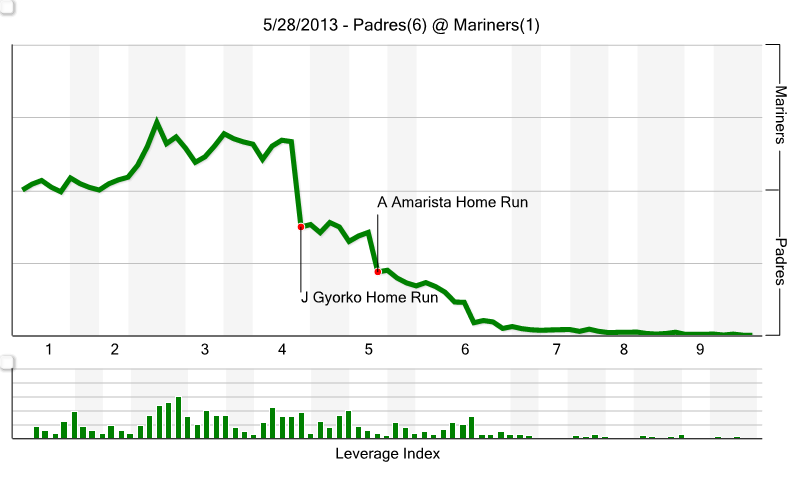 What a wonderful night. Not only did the Mariners lose by an embarrassing margin, but Michael Morse got hurt - again - in a collision at home plate. I'm starting to see what the analysts meant when they called him fragile, and with each passing day I hope more and more that Jack Z will extend Kendrys Morales first.

1) Brandon Maurer got shelled again. Maurer's season has gone pretty much as expected: the fastball is all right and the slider is awesome, but while the curve shows promise the change clearly needs work. As a result, he can't get lefties out at all, and though he's been fantastic against righties they have only constituted 50% of the batters he's faced. Most interestingly, though, he's been giving up buckets of home runs to hitters of all handednesses. Do you think his dinger-prone ways will continue?

2) In some good news, Erasmo Ramirez made a rehab start for Jackson tonight. Stephen Pryor has apparently begun throwing again. When are you expecting those two back?

3) What is your least favorite thing about the hated Padres?