Win Expectancy Chart, courtesy of Fangraphs, for the Padres at Mariners game on May 27, 2013. 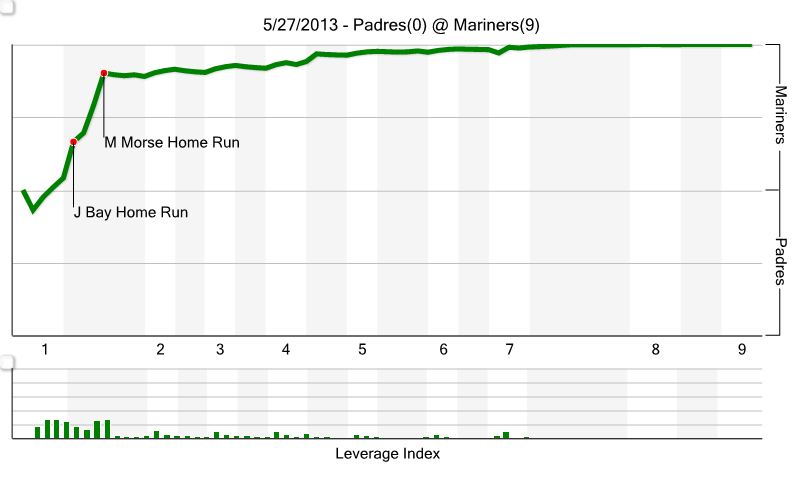 Aaron Harang must have Justin Smoak's patented "angry fanbase" detector installed: just as the calling for his head grew most intense, he went out there and spun this gem. Eight strikeouts against only two walks and no home runs, in a complete game four-hit shutout... not bad at all. The Padres were hitting the ball hard early, and Harang did get some BABIP luck, but after this last week I will take it. The bullpen, I imagine, is beyond grateful for the rest. Now it's Maurer's turn.

1) Nick Franklin began his career in Ackleyesque fashion... by taking a called strike on the outer half of the plate. Then, however, he turned the at bat around and walked. What are your expectations for Franklin this season?

2) Dustin Ackley has officially been demoted to Tacoma. What does he have to do in order to earn his way back up?

3) Lucas Luetge went down with Ackley - somewhat surprisingly, the Mariners elected to keep Danny Farquhar with the team. The bullpen is now very different from what it was on opening day; what do you think of the new-look relief corps?