Win Expectancy Chart, courtesy of Fangraphs, for the Rangers at Mariners game on May 26, 2013. 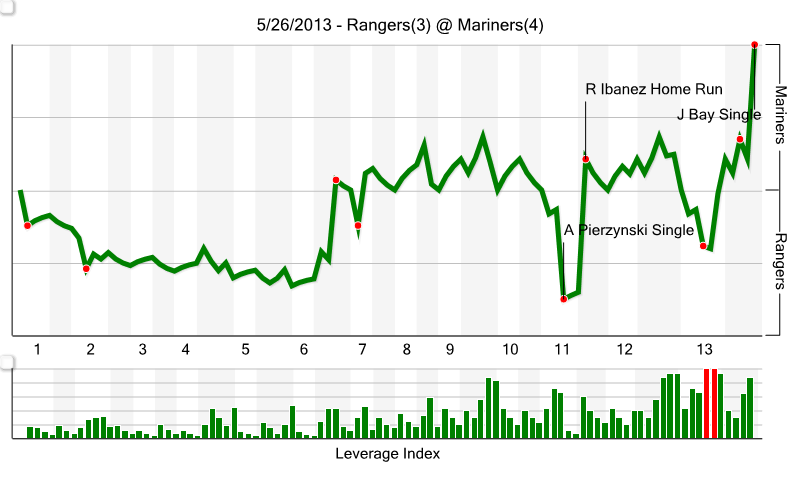 Sorry for the late full chart tonight, guys. As per usual, extra innings screwed me up and I wasn't able to get the full chart up before I had to go in transit. Anyways, the Mariners won in quite dramatic fashion! It's funny how context affects our perception of events: if the Mariners had won this game on the end of a winning streak, we'd be partying in the streets, but because they're coming off of a losing streak the reaction is more like "about time". Humans are funny.

1) Michael Saunders is embroiled in the mother of all slumps. I'm not sure what's up, but for the last week or so he's been swinging at all the wrong pitches and missing everything. He's down all the way to a 87 wRC+. What would you do to break Saunders' slump, if you were Wedge?

2) Michael Morse is embroiled in the mother of all slumps. Like Saunders, he's been hacking at garbage and missing everything, and he's all the way down to a negative WAR. Are you still open to the idea of the Mariners extending him?

3) Dustin Ackley is embroiled in the mother of all slumps. He's been taking way too many strikes and pulling everything on the ground. He's all the way down below Brendan Ryan's wRC+. What do you think Ackley's problem is?