Gameday: Revenge of the Saunders

Like a bad Icelandic saga, Joseph Francis Saunders steers his triremes toward home after an exhausting voyage, his thoughts only of revenge.

Share All sharing options for: Gameday: Revenge of the Saunders

The Mariners Invasion was repelled by its enemies, and now, broken and bloodied, they sail back to familiar shores. Their muscles ache, their helmets weigh heavy with shame, and a few men were lost in the campaign. And now, after a quiet day spent reflecting, unpacking, and drinking herbal tea, the fight is brought to familiar shores.

Tonight, a battered and demoralized crew turns toward its leader: Joe Saunders. Joe Saunders, modern-day Agamemnon, a man whose quiet rage twists his cheeks in paroxysm beneath that straggled, hand-cut beard. Joe Saunders, mythological beast-man, with the strength of a dozen middle infielders and a stomach that can hold several dozen of those little Dixie cups of Gatorade. Joe Saunders will save his team and his land, or will wake tomorrow in Valhalla.

Facing Joe Saunders tonight: Justin Grimm, right-handed pitcher, whose life will never be recited from grandfather to father to son until time immemorial. 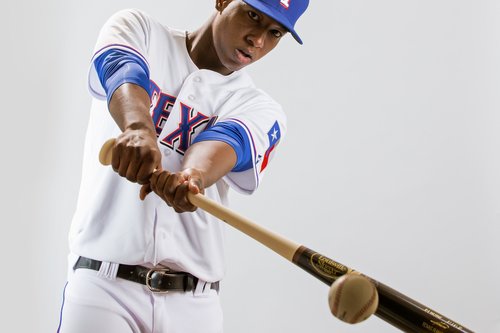 Jon talks to Lone Star Ball about Toby Harrah and what it's like to have everything work out in life.

Right now, the news about the Mariners is more interesting than the actual Mariners. People are lining up outside the team store for their Jesus Sucre shirseys and Carlos Triunfel chocolate bars (which were unfortunately produced back in 2008). Meanwhile, the team veterans held a closed-door meeting after last Wednesday's debacle. Raul Ibanez explained: "We just felt that it was a good time for it. It was a necessary thing to do." This, of course, means that everyone can mark off "veteran closed-door meeting" off their 2013 Mariners Bingo cards.

Tonight is somehow both "College Night" and "Guy's Night Out." It's also unofficially the sneak preview of what's likely to be far too many Jurickson Profar Nights. Profar, the 20 year-old from Curacao, is filling in for an injured Ian Kinsler, and is amazing at just about everything.

Chance of Having Bud Light Spilled on You by Drunk College Student: 30%